2012 was a lost season for De La Rosa as he recovered from Tommy John surgery. Can he become the De La Rosa of old in 2013?

Share All sharing options for: Can Jorge De La Rosa Bounce Back in 2013?

It is no secret that the Rockies season will be determined in large part by the starting rotation, specifically Jorge De La Rosa. In 2009, De La Rosa won 16 games and was a catalyst in the Rockies playoff push that year. From June 5, 2009 to April 25,2010, De La Rosa went 19-4. The Rockies need a capable and healthy De La Rosa to have any shot at contention this year. But will he be the same pitcher?

In 2012, the difference from his fastball to his slider was only about 6 mph. His fastball to changeup difference remained at about 10 mph. The chart below demonstrates how De La Rosa's K/9 innings has dropped the last several years as the velocity between his slider and fastball has gotten closer and closer together. 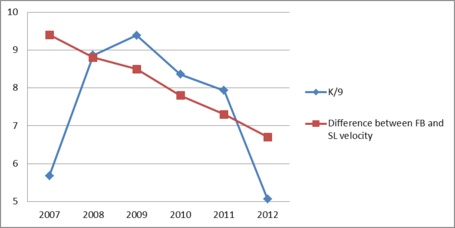 There is a precipitous drop from 2011 to 2012 in his K/9 from just below 8 K/9 to just above 5 K/9. As the chart shows, as his difference in velocity between FB and SL declines so do his strike outs. Typically, the better a pitcher can change speeds, the more strikeouts he can generate. If De La Rosa's fastball doesn't return, and he becomes a pedestrian strikeout pitcher, can he still be an effective pitcher? It's hard to say definitively, but it's doubtful that he can return to his old form without similar strikeout numbers. Strikeouts are certainly not the only way a pitcher can be successful and by no means is velocity difference the only way to tell if a pitcher has lost his stuff or not.

They can help to paint the picture though.

De La Rosa's recovery should also be taken into consideration. There are many pitchers that have undergone Tommy John surgery since its inception, and there are many success stories. Unfortunately, there are also examples of pitchers who never seemed to fully recover.

Kerry Wood and former Rockies hurler Mike Hampton are two examples of pitchers that couldn't make it back - or in Wood's case, made it back only to suffer setback after setback. The fact that De La Rosa had two setbacks during his rehab is a tad disconcerting.

It is almost impossible to predict what the Rockies will get out of De La Rosa this season. The true test will be when the season starts and De La Rosa is dealing to big league hitters in a regular season game. Spring Training can only offer so much evidence as to whether or not he is ready for the rigors of a full MLB season. Only time will tell if he can be a factor this year for the Rockies.

Realistically, it could take De La Rosa close to a full season to fully bounce back from the surgery. If that is the case, will the Rockies risk exercising the option on his contract for $11 million next year?