Can the Rockies bounce back against the Padres and get back to above .500 in spring training play?

Tyler Chatwood and Drew Pomeranz continue their battle for the 5th spot in the rotation this afternoon against the Padres at 1:05 P.M. MST

Chatwood will start and be making his second appearance this spring after appearing in Saturday's 11-2 win over Arizona. He pitched two scoreless innings in relief of Pomeranz giving up two hits and walking one.

Also appearing against Arizona last Saturday was Pomeranz who started and pitched two innings and surrendered two runs on three hits and two walks. He will look to improve upon that performance as he is slated to pitch second today.

Tulowitzki is expected to play 3-4 innings as he continues to test his surgically repaired groin this spring.

Colorado is 2-2 so far this spring.

Below is a tentative pitching schedule for the week (minus today) via Troy Renck's Twitter. 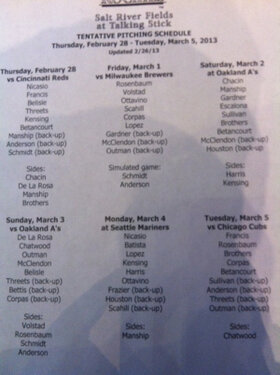 For San Diego O'Sullivan, Weber, Gregerson, Layne, and Thayer are scheduled to pitch. This is a split squad game for San Diego as they also play the A's today.

San Diego is 3-2 on the young spring season.

I'm assuming the game is on 850 KOA and that can be heard here, or on the radio if you are in Colorado.