First-Pitch Strikes for a Last-Place Team

Rockies starters trailed the league in first-pitch strikes last year. Will that change, and should it change, in 2013?

Share All sharing options for: First-Pitch Strikes for a Last-Place Team

The ills of the 2012 starting rotation are so well known that they've become rote: Too many walks. Too many home runs. Too many pitches. Rockies fans can recite the problems almost without thinking about them, like memorizing state capitals.

How can these issues be remedied? "Throw strikes!" isn't a program for improvement. It's an empty plea. "Throw groundballs!" is just as futile. Pitching isn't as simple as that. Pitching starts with a plan, and the plan starts with the first pitch.

Here's a graphic of those relative F-Strike percentages: 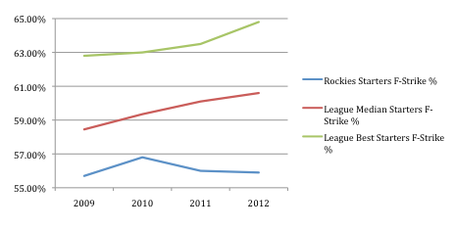 Not good, and not moving in the right direction for the Rockies, regardless of league rank.

While some hitters are known for attacking the first pitch of an at bat, first pitch strikes generally aren't punished. In his article linked above, Burley calculated that less than 8 percent of first-pitch strikes end up as base hits. Only 7.3%, to be precise. The numbers from 2012 bear him out, as well. Of the 184,179 plate appearances in baseball in 2012, only 10.8% ended up with the ball in play (a hit, out or reaching on error) on the first pitch. Moreover, only 3.4% of all plate appearances ended up safely on base with a hit (although that's a higher percentage than in any other individual pitch count). And when it comes to opposition OPS on the first pitch (this stat includes starters and relievers, given the lack of breakout), the first pitch is fairly middle of the road. As one would expect, OPS increases steadily as the pitcher falls behind in the count. Conversely, as this chart shows, OPS decreases steadily as the pitcher gets ahead, which supports getting ahead in the count:

Viewed in isolation, the Rockies' 2012 starting pitchers weren't punished by the first pitch, either. Of the 3,815 hitters faced by the Rockies' starting pitchers, only 353 put the first pitch in play for a hit, an out or reaching-on-error. That's 9.3% of all plate appearances, lower than the 2012 league average of 10.8%. In addition, only 3.5% of those first pitches resulted in a safe hit. That's pretty close to the 2012 league average of 3.4%. Not bad, particularly considering that (1) a substantial number of these pitches were thrown at Coors Field (unfortunately, I don't have the data for home/road splits), and (2) some of these pitches were thrown by Jeremy Guthrie. This would certainly suggest that Rockies starters shouldn't fear throwing the first pitch for a strike.

So, assuming last year's starters were capable of putting the first pitch over for a strike, why didn't they do it? Here comes the needle scratch. Take a look at opponents' OPS against pitchers who started for the Rockies, broken down by pitch-count and listed in descending order of opposition OPS:

Yet another possible reason for the low first-pitch strike percentage is the perceived lack of benefit from a first strike. Now, the worst count for Rockies starting pitchers was the 1-0 count (1.124 opp OPS), so that's a good reason to avoid a first-pitch ball. But an 0-1 pitch was still the third most hittable pitch thrown by the Rockies, with an opposition OPS only .047 lower than a 1-0 pitch. That's a benefit, but not necessarily an appreciable one, and it's less than last year's league-wide differential between 1-0 and 0-1 counts, which was .099. It's not enough of an advantage to lead a Rockies pitcher to take the risk of going in the zone on the first pitch and risking a big hit.

The real benefit for Rockies pitchers isn't so much in getting the first strike, but in getting the second strike. With two strikes, the numbers for the 2012 Rockies starters look a lot more like the league average numbers. The three pitches with the lowest opposition OPS for the Rockies are the same as the league as a whole: 2-2, 1-2 and 0-2. The first strike doesn't appreciably decrease the risk of a big hit, but the second strike lowers the likelihood considerably. And you can't get the second strike without getting the first one. This would suggest that, while Rockies starters didn't see the direct benefit of starting off with a strike, there's an indirect benefit that shouldn't be discounted.

But there's something else going on in these numbers, namely, in the third column. As the count gets less advantageous for Rockies' starting pitchers, the likelihood of a safe base hit diminishes: 1-0 counts generated 2.9% of safe hits out of total opposition plate appearances, 2-0 counts generated much fewer (0.9%), and a 3-0 count generated fewer still (0.05%). Yet the OPS was comparatively high for opponents in these counts last year. Why? Because they held the bats on their shoulders and walked. 48 percent of 3-1 counts ended in a walk last year by a Rockies starting pitcher. 91 percent of 3-0 counts ended in a free pass. Once starters fell behind in the count, they usually didn't get out of it.

The breakdowns above offer some insight into why Rockies starters were less inclined than their league counterparts to begin with a strike last year. But I was curious what the raw numbers would show, specifically, what the dangerous counts were for Rockies starters when it came to extra-base hits and home runs. Here are the numbers:

Maybe this is still another reason why Rockies starters were averse to first-pitch strikes last year. They gave up more extra-base hits, and more home runs, on the first pitch than in any other count. Now, this is inherently skewed, since every at bat has a first pitch, whereas other counts aren't a sure thing in any particular at bat. Another way to look at these numbers is to break them up into hitter's counts, pitcher's counts and neutral counts:

This is helpful, if only in recognizing that there wasn't a huge difference between counts when it came to giving up big hits. In fact, neutral counts were the dangerous counts for Rockies starting pitchers, with the first pitch being the most dangerous, at least in terms of the raw numbers. And more disconcertingly, there was no real benefit to facing hitters with a pitcher's count last year, except for home runs. So the scales of hitter's counts and pitcher's counts didn't much matter for Rockies starters, again, excepting home runs.

This helps explain things a little more. Nine of the 12 count permutations (1-0, 2-1, etc.) fall within this definition of "quick plate appearances," so it's not entirely surprising that the numbers are higher. But they're significantly higher. And they're higher still when you consider that plate appearances against Rockies starters last year ended as "quick" (i.e., three or fewer pitches) 68.4% of the time, and yet accounted for 77% of extra-base hits surrendered and 76.4% of home runs given up. "Long plate appearances" accounted for the remaining 31.6%, but only 23% of extra base hits and 23.6% of home runs. Viewed in this context, Rockies starters gave up proportionately more extra base hits, and more home runs, earlier in the count rather than later in the count. This would explain the mentality of avoiding contact earlier in the count, which for Rockies starters in 2012 meant avoiding hittable first pitches.

All of this got me to thinking about what might be the real cause of the Rockies starting pitching woes last year, and it's not just the lack of a first pitch strike. In fact, that might not even be the principal issue. In addition to the analysis above, consider the fact that the 2009 Rockies rotation was the best in franchise history, but it, too, was last in the league in first-pitch strike percentage.

But one area where the 2009 rotation fared better than its 2012 counterpart, perhaps making up for the relative lack of first-pitch strikes, was getting hitters to chase pitches outside the strike zone. The "O-swing percentage" for the 2009 Rockies rotation was 24.5%, close to the league median of 24.7%. That means that, of all the pitchers thrown by Rockies starters in 2009 outside the strike zone, opposing hitters chased over a quarter of them. Chasing those pitches greatly enhances the likelihood of both swings-and-misses and contact with the ball that's not square, and therefore more likely to result in outs.

The 2009 Rockies' starters missed bats, as well. The starters' swinging-strike rate was 8.7%, tied for 7th-best in the league, and the starters' collective contact rate was 80.1%, also 7th-best (i.e., lowest) in the league. So while Rockies' starters were relatively poor at throwing first-pitch strikes in 2009, they were able to get hitters to chase pitches outside the zone, and also threw pitches past their opposition.

The 2012 Rockies were, well, not as good. Last year's staff had an O-swing percentage of 28.1%, last among all clubs. Curiously, the 2012 raw number is better than in 2009, but it nevertheless was 30th in the league last year and well off the 2012 median of 30.7%. The 2012 Rockies also failed to avoid contact relative to other staffs. The starters' collective swinging strike rate was 26th-lowest in the league (7.9%) and their contact rate was 81.5%, 12th highest in the league. Lest we over-read this, the Rockies weren't far off the league median of 81%, and not too far off their contact rate in 2009. But compared to the rest of the league, these numbers weren't good in 2012, and they added to the list of other problems, such as last year's relatively low O-swing percentage.

Why the poor performance? Well, to paraphrase Tolstoy, every unsuccessful pitcher is unsuccessful in his own way, by which I mean that I don't think there are broad-brush, philosophical reasons that apply to all of last year's starters. Some were hurt and rebounding (Chacin, De La Rosa), some lacked command (Chatwood, White), some proved long-ball prone (Guthrie, Outman), some were inefficient (White, Nicasio), and some suffered from the loss of reliable secondary pitches (Pomeranz). What we know is that, as a group, Rockies' starting pitchers failed to consistently throw first-pitch strikes, failed to get ahead in the count, and failed to get hitters to chase pitches outside the zone. The result was more walks, more hits, and more hard hits.

What's the solution? Part of it might be more first-pitch strikes, but that's hardly all of it. To see real benefit, Rockies starters have to get past the first strike and to the second one, and the strategy for getting to that second strike likely will differ for each pitcher. For success in 2013, Rockies starters need a better plan. That plan starts with the first pitch, but it doesn't end there.

(Postscript: After I finished this article on Thursday, Alex Kienholz at Beyond the Box Score posted a very interesting analysis of f-strike percentage, questioning whether it offers insight into a pitcher's ultimate success. HIs analysis is well worth reading, and it's consistent with the fact that, while Rockies starters didn't throw first-pitch strikes at the rate of their counterparts around the league, it might not have been a significant cause of last year's troubles).