Colorado Rockies fandom, in the form of baseball cards

Going through my old baseball card collection brought up some fond memories and reminded me of a lesson that all of us should remember.

Share All sharing options for: Colorado Rockies fandom, in the form of baseball cards

Collecting baseball cards is one of my fondest memories of my childhood. To this day, certain smells, sights and even sounds (particularly, 90's gangster rap, crappy alternative and the Gin Blossoms) bring me back to the days of spending hours ripping packs and sorting cards by team.

Of course, there are good memories and bad ones. The good: pulling a 1995 Fleer Ultra Ken Griffey Jr. Gold Medallion Home Run Kings card from a pack -- on my 12th birthday, even. The bad: the many, many times boxes of cards yielded less value than what I paid for them, which sucked because I had to work my ass off mowing lawns, pulling weeds and shoveling snow to earn that money. However, looking back, I realized that the whole experience wasn't about getting "good" cards or "bad" cards in packs and boxes. That realization happened recently when, while shuffling through a box of old cards, I stumbled upon a couple that brought a smile to my face.

I've always been a fan of the Rockies. Well, almost always; I watched with great interest when the team's first games were broadcast on local TV here in Salt Lake City, but I was still clinging on to my Toronto Blue Jays fandom at the start of the season. That is, until I took a trip with my brother, dad and uncle to Denver to see the Rockies play the eventual NL-champion Philadelphia Phillies at Mile High Stadium in late-May/early-June of 1993.

Even though the Rockies lost both games we attended by a combined score of 24-1, the experience left my 9-year-old self wanting to bleed purple forever (which, while some would say that's a curse, I consider it one of the great blessings I've received in life). The reason? Not only were the two games the first MLB contests I had ever seen, but it was also just the second time I had been out of the state of Utah. The exciting experience was made even better when my dad and uncle allowed my brother and I to walk to a baseball card shop that was down the street from our hotel.

I don't remember the name or location of the shop, but I do remember making three purchases. My memory is foggy on the first one, but I'm pretty sure it was a 1993 Upper Deck card featuring David Nied, Andres Galarraga and Dante Bichette: 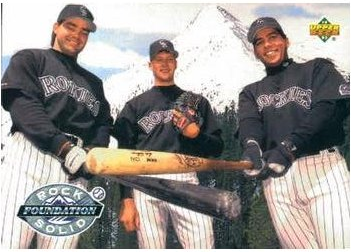 Unfortunately, my attempts to locate this card within my collection have been unsuccessful, although I plan on continuing to try to dig it up. Regardless, while it's a very cool card, it doesn't quite hold the significance of the other two that I purchased.

The next card I present to you is a bonus card from the 1992 Donruss baseball set: 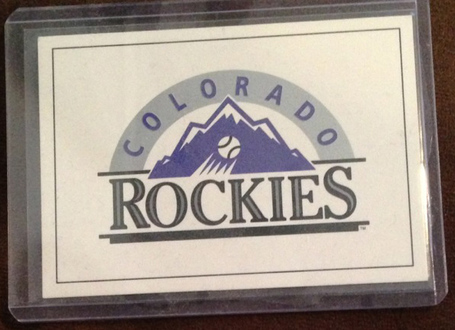 Note the old logo, which features a silver arch, sans serif typography and the tiny baseball in the middle of the mountains, as opposed to where it sits in the updated version. It's a beautiful card, not only because of its appearance, but also because it holds the distinction of being the first Colorado Rockies baseball card ever made.

Check out the back: 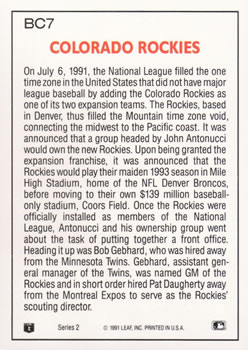 Doesn't it seem crazy to think that more than 21 years ago, Coors Field was known as Coors Field, even four years before it was built? Maybe it's just me, but that's kind of surreal.

Anyway, while card-collecting Rockies fans now had a piece of history to call their own, they were still without a face to grace the cardboard along with the team's logo. That is, until Series 2 of the 1992 Upper Deck set was released. Behold, the first face of the Rockies, Ryan Turner: 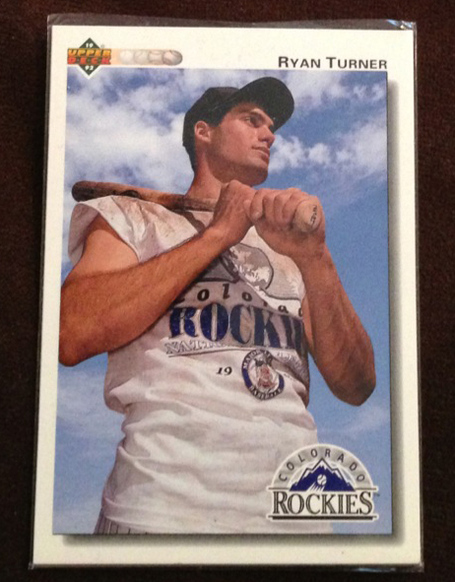 Those Upper Deck cards had a great look, but this card was extra-special, in that Rockies fans and card collectors everywhere now had someone to, perhaps unfairly, pin their dreams on.

Turner was signed by the Rockies during the 1991 winter meetings after hitting .315/.413/.427 as a 22-year-old with independent Bend of the Northwest League. A year later, Turner, along with five other Rockies prospects, spent a season in Visalia, the Cal League affiliate of the Minnesota Twins. Turner hit a respectable .266/.343/.400 on a team that featured nine future big leaguers, including 1995 American League rookie of the year Marty Cordova.

Turner had another solid season in the Cal League in 1993, posting an .834 OPS for the Central Valley Rockies, but would flame out a year later after a getting off to a poor start at Double-A New Haven.

Clay Latimer wrote about Turner, who returned to school after retiring from baseball and now works in finance, in the Rocky Mountain News leading up to the 2007 World Series.

While that time seems thousands of miles away now, going through my baseball card collection reminded me of something. Just look at those two cards. They are worthless in terms of value. However, it's not about that; it's about the joy that pursuing and obtaining the cards gave me -- a lesson I learned that I plan to instill in my newborn son if he ends up taking an interest in the same things.

The same lesson can be learned from baseball and sports as a whole, as well as from life in general: it's not always about enjoying the end result, but rather cherishing the ride that you take along the way.

I think Turner would agree.