Rockies Prospect Roundup: The next wave of catcher prospects after Wilin Rosario

A look into the catcher prospects of the Rockies system now that Wilin Rosario has graduated to the Big Leagues. Including a catcher infographic, tweets of the week and minor league links.

Share All sharing options for: Rockies Prospect Roundup: The next wave of catcher prospects after Wilin Rosario

A void was left in the Rockies system after the graduation of Wilin Rosario to the Major Leagues. This void lead me to wonder if there is more talent at the catching position lurking in the minor leagues. Was there a player ready to serve as a viable backup for Wilin, or possibly replace him if he were unable to duplicate his rookie season? This article is an overview of the catchers in the Rockies system with quotes from top prospecting sources on the players and my opinion if I've seen them in person.

The catchers are listed in order of how close they were to the majors last season. I've included a table below each player with three stats from their 2012 season: wRC+, ISO and Caught Stealing. The wRC+ stat is park adjusted and compares a player's offensive output to the league average with anything over 100 being above average or good. The Isolated Slugging (ISO) shows the true power of a player and is calculated by subtracting Slugging - Average. Caught stealing is simply the percentage of runners gunned down.

Matt McBride - Part of the Ubaldo Jimenez trade that brought four players from Cleveland. Mcbride is a utility player who plays mostly in the outfield and at first base, he played in only eight games as catcher last season for Triple-A Colorado Springs. Still McBride shows a quick batting stroke that resulted in a .344/.365/.535 slash line in the hitter friendly PCL last season.

Baseball America describes Matt defensively as having shaky receiving skills and a below average arm. In his minor league career he's thrown out an average of 20% of runners attempting to steal. Matt will be 28 this May. Personally I like McBride's hit tool, but I think it was a little inflated due to the PCL and I don't think he'll have much value at catcher in the Major Leagues.


Lars Davis - A rare catcher who bats left-handed, Lars repeated Double-A Tulsa for the third time, at the age of 26 and finished with slightly his worst season of the three. Although he's maintained a healthy average in the past three seasons, each year he's sacrificed on base numbers for home runs.

Lars was selected to play in the 2012 Arizona Fall League where he finished with a slash line of .310/.362/.452 in 12 games. His solid AFL campaign could be a stepping stone for this year, but if we've learned anything from watching Nolan Arenado, a solid AFL doesn't always lead into a big season. Lars was invited to big league camp this spring; a sign that he's considered close to the bigs and nearly out of minor league service time.

After Lars was drafted, John Sickels of Minor League Ball, wrote that many teams believed he wouldn't stick at catcher because of his size and he was new to the position. Lars is a big guy at six-foot-three, but he didn't start catching until he was in college, born and raised in Canada, Lars excelled as a volleyball player in high school. I've seen Lars in person and like his ability to work behind the plate and feel he is one of the best in the system at blocking balls in the dirt. His left-handed swing is nice, but he can't hit consistently for a high average.

Will Swanner - Played for Low-A Asheville in his third season with the Rockies after being drafted in 2010. A catcher with tremendous upside, but also some serious question marks. On the positive, he was ranked as one of the top 10 catching prospects in baseball by Mike Newman of Fangraphs and Jonathan Mayo of MLB.com. Will has tremendous power and the ability to hit for average, last season his slash line of .302/.385/.529, teamed with 16 home runs in an injury shortened season,was one of the best in all of Low-A.

On the downside, Will is susceptible to strikeouts and has struggled blocking pitches and throwing out runners. Last year alone he allowed 120 stolen bases and committed nine errors. Will has been praised for his ability to call a game by his pitchers and Baseball America states that he shows leadership skills behind the plate, so he still has some defensive value as a catcher.

I think the real question is if Will can stick at the position, but even if he doesn't, there's enough value in his bat to be excited if he plays elsewhere else on the diamond. Justin Morneau was an example of a catcher who found success at another position, although Morneau had significantly fewer strikeouts in his minor league career and Will's swing was a little long in the games I've seen.

Ryan Casteel - The other catcher in Asheville last season, Ryan continues to move through the system after three solid seasons: in Casper, Tri City and then Asheville. He started the 2012 season at the age of 20, so he's still age appropriate for the SAL league. So far he's demonstrated a low strikeout rate where he doesn't walk a lot and an adequate .279/.332/.414 slash line. He does have some gap power though, as his 24 doubles led all catchers in the Rockies system.

Defensively Ryan has a solid ability to throw out runners and this ability has increased each year. Ryan's solid arm was offset however with nine errors and one of the lower fielding percentages among catchers in the system. I like Casteel's solid advancement through the minors and his ability to throw out runners, but so far his ceiling isn't very high.

Tom Murphy - Selected in the third round out of the University of Buffalo in the 2012 draft. The 21 year old Murphy was ranked as the #5 prospect in the Northwest League by Baseball America last year.

John Sickels has lauded Murphy's strength saying he had ‘above average power potential and could turn on anyone's fastball.' While Keith Law was down on Murphy calling him, ‘a power-before-hit poor defensive catcher.'

Murphy has a strong arm and athletic ability that helps overcome some of the wear and tear of catching. He hit well in the pitcher-friendly NWL with a slash line of .288/.349/.462. Defensively he struggled blocking balls in the dirt and although pre-draft scouting reports tabbed him with a strong arm, he was below average in throwing out runners. Personally I like Murphy's ceiling and feel like he has a fairly high floor at this point, I can't wait to see how he does against more advanced pitching though.

Wifredo Rodriguez - Joined the Grand Junction Rockies after being selected in the seventh round of the 2012 draft by Colorado. The 18 year old had a very good offensive season in the hitter friendly Pioneer League with a .319/.370/.452 slash line. Lauded as a gap hitter, Wilfredo's 14 doubles in the Short Season League were more than Lars Davis hit in 49 more games.

Although he has a good build for a catcher, Wilfredo is still a work in progress behind the plate. However, John Sickels wrote that Wilfredo has the tools to be a solid defender, ‘with a quick release' and ‘plenty of mobility.' He also called Wilfredo a sleeper prospect. I saw Wilfredo catch for Jayson Aquino and he struggled with balls in the dirt, but he has a very quick bat with some thunder in it.


Jose Briceno - In his third year with the Rockies organization, 2012 was Briceno's first season stateside after two years in the Dominican Summer League. An injury sidelined the 19 year old Briceno after only seven games with the Grand Junction Rockies. In that small sample he performed well across the board, hitting for average and slugging well.

The fact that he hit in Grand Junction shouldn't surprise however, because Jose played extremely well in the DSL hitting .288 while gunning down 66% of the runners attempting to steal on him. Briceno is a wildcard in the Rockies system at the catcher position in my opinion.

Dustin Garneau - Played for Modesto in his fourth year in the Rockies system. The 24 year old showed decent patience at the plate with an on base percentage that was 90 points higher than his batting average and a .243/.332/.383 slash line.

Known more for his defense than his offense, Baseball America described him ‘as workmanlike' and ‘built like concrete' - which could explain his career .236 average.

Note: the ratings in this infographic come from thebaseballcube.com, but the rankings are my own personal opinion. 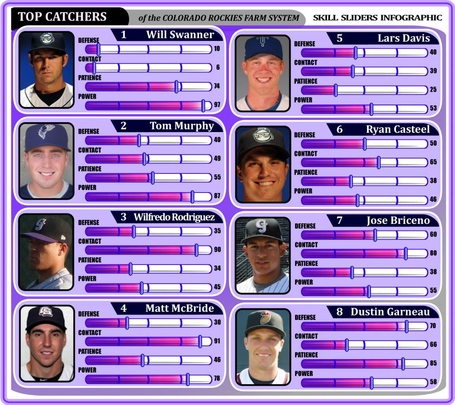 Ultimately, the way I see it, there are three very good catching prospects in the Rockies system with Swanner, Murphy and WIlfredo. Will Swanner is highly thought of outside the organization and I agree he has the highest ceiling of them all. Murphy is ranked slightly ahead of Wilfredo because of his maturity and college background - although I like Wilfredo's hit tools a little more, he just needs time to develop them. Matt McBride has the contact and power to stick in the major leagues, but I don't see him playing catcher there. While Lars Davis has a chance to be a very solid backup catcher with some defensive value and perhaps a platooning advantage from the left side, but I don't consider his makeup to be a starter in the Major Leagues at this time. Casteel and Garneau are both solid defensive catchers, but both have liabilities at the plate and I would like to see how they perform against advanced pitching before I ranked them higher. Jose Briceno is a wild card, I like his ability to gun down runners and he showed some ability to hit in both the DSL and his short time in Grand Junction. I will be watching him closely this year to see how he returns from his injury.

What are u thinking trying to run on @cargomedia5 there..not even close 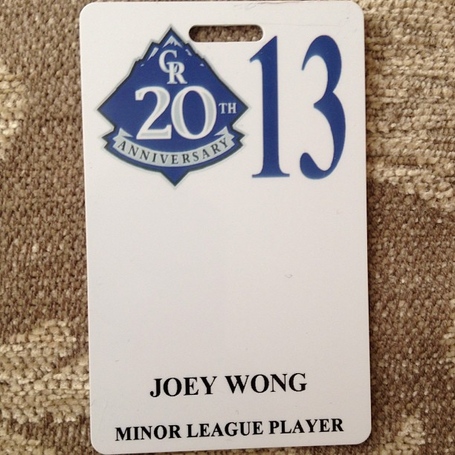 Flashing back to best Minors stadiums: No matter what the level, ballparks can be part of the big show | Milb.com There is a beautiful picture of Tulsa's ONEOAK Field, that alone is worth clicking the link.