The Rockies swept San Diego last weekend at Coors, but the Padres will be looking for revenge over the next three games.

After a day off, the Rockies enter the setting of last night's melee between the Dodgers an Padres in which Carlos Quentin broke Zack Greinke's collarbone; an injury that could shelf the righty for up to two months of action. Matt Kemp was so outraged by the incident that police had to separate him and Quentin in the hallway after the game.

Quentin has led the league in hit by pitches in each of the last two seasons and he's off to a fast start in that category once again this year. With both Chase Headley and Yasmani Grandal out of the San Diego lineup, he becomes the hitter to watch this series.

Over the last eight seasons, Colorado's record by the Gaslamp Quarter has actually turned out to be a decent bellwether for their overall season performance. In each of their last three winning seasons (circled on the table below), they have had a winning record in Petco park. 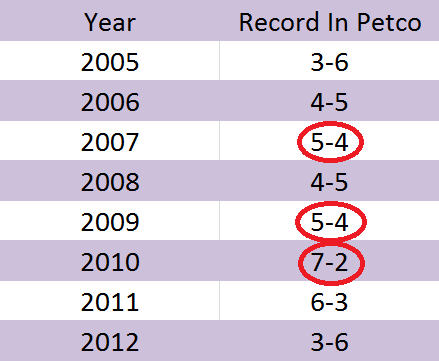 If the Rockies can turn around the ugly 2012 performance they submitted in California's most southern baseball city, it may be a sign of good things to come later this season.

However, Petco will play slightly different in 2013 than it has in years past. Over the winter, the Padres brought in the fences by 12 feet in a small spot in left center field and 11 feet over a large area in right center field. It should make the park play slightly more neutral, but it's impossible to tell if it will impact the Rockies success here.