The Cubs are probably going to be bad, once again, when 2013 is all said and done. That doesn't mean the club is without strengths.

Not much is different these days for the Chicago Cubs. They lost 101 games a year ago, more than all but one team in the National League. This year, their 22 losses are, again, second-most in the senior circuit. The lovable losers' offense was an embarrassment in 2012, finishing with the second-worst OPS+ in the NL. While that number has improved a bit this year, there are some legitimate reasons for concern. And the bullpen? Yuck all the way around.

Still, there's a bright spot for Chicago this year, and that's the starting rotation. Only one of its members -- Edwin Jackson -- is below average in terms of ERA+. Veterans Carlos Villanueva (3.02 ERA, 131 ERA+) and Scott Feldman (2.53 ERA+, 157 ERA+) have been strong throughout the early part of the season, and Travis Wood 2.33 ERA, 170 ERA+) is making his case as the team's best pitcher. However, nobody in the rotation is as good -- stuff-wise or upside-wise -- than Jeff Samardzija.

Turning Samardzija into a starter was one of the best moves the Cubs have made over the past few years. They recently made another solid decision, as I discuss below with Josh Timmers of Bleed Cubbie Blue.

Bryan Kilpatrick: At 15-22, the Cubs are performing about as expected through the first month and a half of the season. That said, there are some positive story lines with this club. Fill us in on the biggest positive and biggest negative for the club this season.

Josh Timmers: There hasn't really been anything positive on the field. The biggest positive, I guess, would be the Anthony Rizzo extension that was reported yesterday. Along with the Cubs having locked up Starlin Castro, they've now got two building blocks for the future. 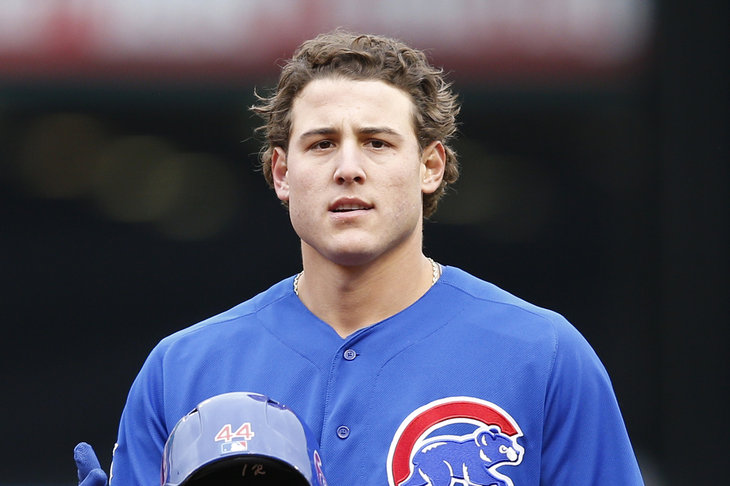 "The Cubs will ideally spend $68 million on Rizzo's Age 23 through 31 seasons. Nine whole seasons, at roughly $7.5 million per season. As it happens, these are most typically a great player's best nine seasons." -Rob Neyer

On the field, I think you could say that the starting rotation has looked solid to start the year. Travis Wood is looking like he'll be a decent back-end of the rotation starter for years to come. Scott Feldman has looked good and could be spun off for prospects at the trade deadline. And there's Samardzija (see below).

The other surprises are Nate Schierholtz and Luis Valbuena. Schierholtz has always had the potential to be a pretty good player if you gave him a chance, got him out of AT&T Park and never, ever let him face a left-handed pitcher. Valbuena is probably just riding magic pixie dust right now.

As far as the negatives go, the bullpen is a disaster, although Kevin Gregg, of all people, has stepped up. The offense in general, other than the aforementioned Schierholtz and Valbuena, has been disappointing

BK: What kind of help, if any, is on the way for the Cubs in terms of the farm system? And, how soon will it make an impact?

JT: This is my area of expertise, and I can say there isn't much help coming anytime soon. The Cubs have some big prospects, like shortstop Javier Baez, right fielder Jorge Soler and center fielder Albert Almora, but all of them are at least two years away. While all could be very good, none will help this year and probably not much next.

I actually think the first impact player to come out of the farm system will be whichever pitcher the Cubs take in the June draft--Jonathan Gray or Mark Appel. Appel is probably major-league ready right now (although there would be no point in bringing him to the majors this season) and Gray isn't far behind him. Either could be in the Cubs' starting rotation in 2014.

BK: Is there a certain long-term organizational plan being put into place by Theo Epstein and Jed Hoyer? Do you feel comfortable with how it's playing out?

JT: I think Epstein and Hoyer had to tear down the whole system and start over. Guys who were willing to adapt, like Tim Wilken, were allowed to stay on and guys who didn't want to, like Oneri Flieta, were let go despite having long-term contracts.

So far, everything looks OK. Under Jim Hendry, this team was always reacting rather than acting. Epstein seems to at least have a plan in place.

BK: Jeff Samardzija looks like he's knocking on the "elite pitcher" door, but it doesn't seem like he's quite there yet. What is holding him back? Also, can you please convince the Cubs' brass to trade him to the Rockies? Thanks in advance.

JT: Samardzija is really only kept back by his inexperience. This is only his second season as a major league starter, and because of the football, he didn't have as much experience pitching in his past as most major league pitchers would. Once he learns to pitch out of trouble instead of trying to throw his way out of trouble, he could be something special.

One of his weaknesses is giving up home runs. You sure you want him? (Editor's note: Yes. Yes we do.)

BK: What are your predictions for this series?

Really, I think one team will win two of three. I think it will be the Cubs because they play better at home, but it wouldn't surprise me at all if it were the Rockies.