Usually, you can count on the Giants having a very strong rotation and an offense that does just enough. Things have been a little different so far in 2013.

Matt Cain. Tim Lincecum. Madison Bumgarner. Ryan Vogelsong. Barry Zito. The mere sight of those names -- or, most of them, anyway -- is enough to strike fear into the hearts of opposing teams, and their fans, everywhere. If we're just talking about the Rockies, who can't even sniff Zito for whatever reason, it looks like a murderer's row of pitchers who have a reasonable shot at throwing a no-hitter every night.

While Colorado still hasn't had any success against the Giants (big surprise), other teams all over the National League have spent the first month and a half of the season teeing off on four out of those five hurlers. Bumgarner is the only one who is decidedly above-average; his 2.18 ERA, 157 ERA+ and 4.15 K/BB ratio are by far the best in San Francisco's rotation. Zito is the only other Giants starter who has managed to crack the 100 ERA+ barrier; he's sitting at 101 with a 3.40 ERA despite allowing more than 10 hits per nine innings.

Lincecum has improved upon his disastrous 2012 season, boasting a 4.07 ERA with decent peripherals, though his walks are still up. That leaves Cain and Vogelsong as the biggest negative surprises in San Francisco's rotation.

Cain has been victimized by an astronomical home run rate, and that's really the only difference between his numbers from 2012 and 2013. His strikeout and walk numbers are similar, and he still allows well under a hit per inning. However, Cain has already given up 10 gopherballs; the 12.5 percent HR/FB rate is easily the highest of his career and double what he allowed a year ago. As Cain's home run luck improves, so should his numbers.

Vogelsong (who of course won't pitch in this series) is another story entirely. He has allowed more runs (37) and home runs (11) than any other NL pitcher, but he's also given up 59 hits in 41.1 innings and his walks are up by nearly a full batter per nine innings. All of this contributes to a 1.84 WHIP, up from 1.23 a year ago, and a rotation-worst 43 ERA+. Vogelsong is striking out batters at a better rate than he ever has over the course of a full season, but he's clearly having command issues. With age not being on his side, it's entirely possible that he's done being an effective pitcher, but we shall see.

Despite their starting pitching woes, the Giants are in first place in the NL West thanks to a terrific bullpen and a very good lineup. The San Francisco relievers have been mostly well-above average, with former Rockie Jeremy Affeldt being the most notable exception. Sergio Romo is terrific -- as always -- at the back of the bullpen, racking up 12 saves while walking 1.6 batters per nine innings and striking out nearly 10. Affeldt has walked more batters than he's struck out as one of the Giants' situational lefties and owns a 2.04 WHIP, but he has just 8.1 innings of work under his belt. 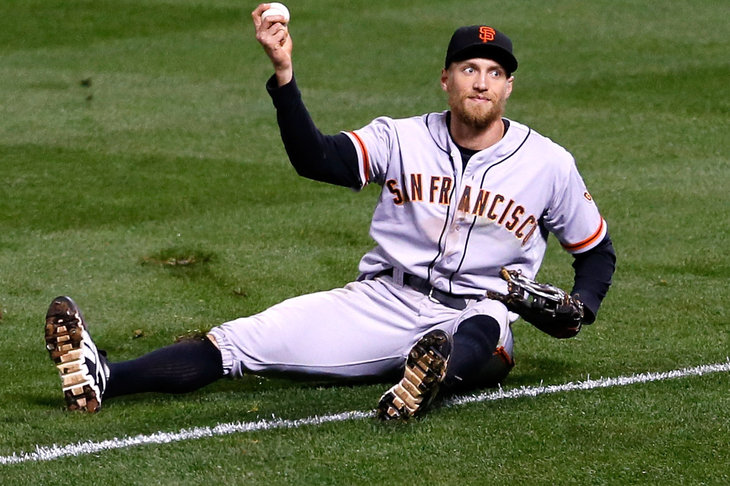 "Gangly. Runs like a rotary telephone thrown into a running clothes dryer."

Angel Pagan, who was the recipient of a pretty hefty contract during the offseason, is the lone below-average regular, posting a 98 OPS+ in 162 plate apperances. If Crawford and Pence continue to do what they're doing, the Giants are going to be awfully hard to beat, even with a small step back in the starting rotation.

As always, be sure to visit McCovey Chronicles for the best coverage of the Giants on the web.