Share All sharing options for: Monday Rockpile: The supporting cast

Earlier this season, I introduced something called "Drag Factor". It's designed to measure how much "drag" there is is in an offense by highlighting the players who are both below average at the dish and racking up a large number of plate appearances. The simple theory here is that if you have too many of these players and therefore too much drag in your offense, it's going to counteract the production you get from your top hitters and wreck your overall offensive output.

In order to determine if a player if below average offensively, we use the wRC+ metric from fangraphs. It's extremely useful for an exercise like this because it cuts an easy to understand dividing line with anything below 100 being below average production and anything above 100 being above average production. It's also useful because it adjusts the offense production based on the park the each player plays in, and that's the only way you could compare the Drag Factor of each team in the NL West accurately (which is what we'll be doing in today's Rockpile).

The formula to calculate the Drag Factor each player is putting on their team is as follows. 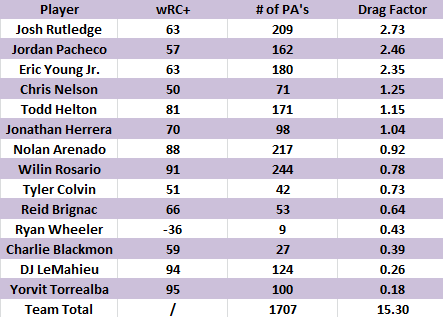 With 1,707 plate appearances taken by players with a wRC+ below 100, the Rockies lead the division (in a bad way). Colorado has done a good job of cutting loose players like Chris Nelson and Eric Young Jr (who both had even higher Drag Factor scores at the time of their dismissals) in an effort to improve their offense, but there's still enough small issues working together that are currently preventing this lineup from being as dangerous as it could be later in the season. (More on that in a bit) 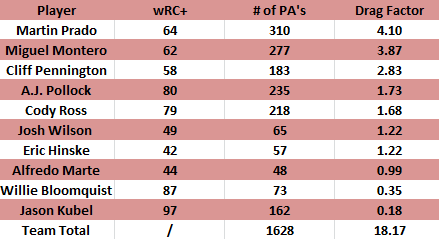 This could be bad news for the rest of the division. Arizona is on top by three games in spite of an extremely high Drag Factor score and it seems as though it's likely to go down over the next couple of months. Both Martin Prado and Miguel Montero should not have Drag Factor scores anywhere near this high. Even in a horrible year, it's reasonable to expect both of these players to start raising their wRC+'s (and therefore bring down their Drag Factor scores) as we head into the second half of the season.

The silver lining here for the rest of the division going forward (and the reason the D'Backs have been able to overcome that Drag Factor score) is that Patrick Corbin, Gerardo Parra, Eric Chavez, Paul Goldschmidt, Matt Reynolds, and Will Harris (we really need to stop helping the snake's bullpen so much) are all having remarkable seasons and at least a couple of them are probably not sustainable. 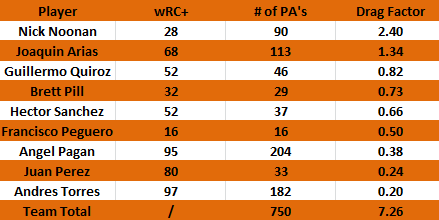 If you want to know how the Giants are staying in the race with the most disappointing rotation in baseball this season, here you go. They've had less than half as many plate appearances taken by guys with a wRC+ below 100 than either the D'Backs or the Rockies. When healthy, there's literally no bad hitter in this lineup with Posey, Belt, Scutaro, Crawford, Sandoval, Pence, Pagan,and Torres. Certainly far all great hitters, but no easy outs.

The problem the Giants have is that things drop off dramatically once you get passed their planned starters, so any injuries at all are likely to hurt. The chart actually shows this even with the small overall Drag Factor score as both Noonan and Arias have gotten more plate appearances recently with Sandoval on the shelf. It should also be noted that San Francisco is getting what should be completely unsustainable production from Gregor Blanco. If they do not get healthy soon and stay that way, this Drag Factor score should start to rise. 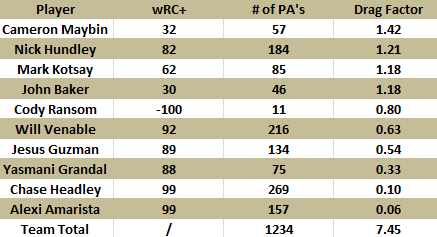 Very similar to the Giants on some ways actually. They are getting almost nothing from their starting rotation but there's jut not many easy out in this lineup. Take a look at the Padres roster and note how many guys they have with a wRC+ higher than 100, and then realize the Chase Headley isn't even one of them. There's not many stars on this team, but they are going to make life very difficult on your pitcher.

It's odd to think of the Giants and Padres this way because their ballparks want to make you believe the opposite about any team these two franchises put on the field, but they have both completely shifted to deep lineup / weak starting rotation style teams and the numbers support it. 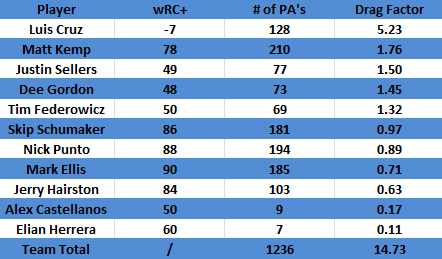 This actually isn't as bad as I thought it was going to look, especially when you take into consideration that Luis Cruz is single handedly responsible for 36% of the team's total Drag Factor score. He's been so bad this season that at one point in late May, his Drag Factor score was almost as high as the San Francisco Drag Factor score for the season with both sitting around 6.50. When Cruz starts for the Dodgers, it's like there's two pitchers batting.

So now the question for the Rockies is how do they lower their Drag Factor score from here. They have just four everyday players with a wRC+ of 100 or higher in Troy Tulowitzki, Carlos Gonzalez, Michael Cuddyer, and Dexter Fowler (by far the fewest in the division), but those four guys have not just been above average, they've been exceptional as a group.

The real issue comes in the drop off that occurs in offense production after these four guys. Right now, DJ LeMahieu is fifth on the team in OPS, and while I love what DJ has brought to the team this season, his .754 OPS should not be the fifth highest. So here's a few ways the Rockies might be able to improve this Drag Factor score and get a leg up on the division as we head towards the second half of the season.

1) Get Tulo, Cargo, Fowler, and Cuddyer healthy and keep them healthy.

The Rockies need these four bats. Not only are they taking the league by storm, but all four of them in the lineup means there's only four other spots the team has to fill once you get to the bats that drop off in production. With off days and time on the DL for both Cuddyer and Tulo, the Rockies have been averaging closer to three of them in the starting lineup for much of the season.

2) Figure out if Corey Dickerson is the solution to the first base problems.

No, I'm not suggesting that Corey take over at first, but if he proves he can hit at this level anywhere close to the way he hit in the minors, then the Rockies have an interesting decision to make involving several variables. They will have to weigh Dickerson's bat (which could be the fifth best stick they have right now), Dickerson's glove (Spoiler Alert! - It's not good), the difference between Cuddyer's glove at first, Colvin's glove at first, and Helton's glove at first, and the complete lack of offensive production the team is getting from that position right now.

Currently, the Rockies rank 27th in baseball in OPS at first base trailing only the Marlins, Mets, and Brewers. Todd Helton and Jordan Pacheco have received the vast majority of the starts at the position but they are just not cutting it offensively with Todd having just a .661 OPS and Pacheco sporting just a .630 OPS when they play there. There's going to be a tremendous amount of variables acting at once here over the next few weeks but if Corey Dickerson continues to rake, there's a scenario where the Rockies are a better team with Dickerson in right field and Cuddyer at first for the majority of games. This doesn't mean that Helton should never start, but it does mean that Jordan Pacheco's playing time would be in danger.

But of these players are major keys for the Rockies. Both are young bats that could do big things for this team, but what they do at the plate for the remainder of 2013 remains anyone's guess as young players tend to be extremely unpredictable. They are both capable of finishing the season with a wRC+ north of 100 but they also could struggle as they try to figure out the adjustments the league is making on them. Either way, they are both very important bats that could swing the pendulum of the offense one way or another.

4) Start DJ LeMahieu at second base when Tulo comes back if Rutledge does not show promise at the plate in the next three weeks.

There's no way around the fact the DJ LeMahieu is a better hitter at the major league level than Josh Rutledge right now. This doesn't mean that Rutledge can't pass him soon or won't be the better bat in the long term, but the fact remains that right now in the summer of 2013, LeMahieu has shown that he's the more consistent option at second and unless Rutledge catches fire and ignites a heated debate next month, LeMahieu should be the starter. DJ has been the answer to reducing the team's Drag Factor at second base so far this season and he should not be bumped by Rutledge until there's reason to believe otherwise.

Troy Renck has more on yesterday's game in which the Rockies almost blew a seven run lead.

Renck also notes that the Rockies have an eye on the starting pitching market, however the current group will get a chance to prove they should remain in tact.

Thomas Harding talks about Michael Cuddyer in his wrap of yesterday's game. Cuddyer's hitting steak now stands at 21 games, just two off the franchise record of 23 held by current hitting coach Dante Bichette from the 1995 season.

Troy Tulowitzki has opened up the largest lead at any position in the All Star voting as he has almost twice as many votes as second place Brandon Crawford despite being sidelined with a fractured rib and Carlos Gonzalez is finally starting to get noticed by fans across the country as he's jumped all the way to fourth in the outfield voting.

Corey Dickerson is the prospect of the day over at Minor League ball.