Carlos Gonzalez is an outstanding hitter, but he's even better when Troy Tulowitzki is batting behind him.

Share All sharing options for: Monday Rockpile: Better together

When the Rockies lost to the Washington Nationals 5-4 on June 13th, they fell 2.5 games out of the division lead. Following that game, they had to place Troy Tulowitzki on the DL with a fractured rib, they effectively lost Dexter Fowler (he's only started six games since getting hit on the hand and he's gone just 4-23 at the plate since that incident), they've seen Carlos Gonzalez's production decrease, and oh by the way they've gained a half game on the division lead.

While the Rockies mostly have the rest of the division to thank for that last part, they do have some players who have really stepped up in this time of need. Offensively, the most notable is Michael Cuddyer and his 27 game hitting streak. He couldn't have picked a better time to get hot.

However, the biggest contributions as of late have come from the top of the rotation. Since June 13th, Jhoulys Chacin, Jorge De La Rosa, and Tyler Chatwood have each made three starts. Their pitching lines from those games are as follows...

If you're keeping track at home, that's nine starts of 59.2 innings pitched to the tune of a 1.36 ERA - And would you believe that the Rockies are just 6-10 overall while this is going on? They lost the Jorge De La Rosa start in Toronto when Matt Belisle gave up two runs in the eighth, they lost the Tyler Chatwood start in Washington 2-1 when Manny Corpas gave up a solo home run, and they lost a second Tyler Chatwood start against the Mets when Matt Belisle gave up a two run home run to Marlon Byrd just five outs away from victory. In addition, the Rockies have lost all seven games not started by these three pitchers since Tulo went on the DL and the team effectively lost Dexter Fowler. If it wasn't for the brilliant pitching of Chacin, De La Rosa, and Chatwood, this team could have easily gone 3-13 during this stretch.

The single biggest reason this club actually gained a half game on the division lead during this period is that Arizona and San Francisco have been even worse. The D'Backs are just 5-10 in their last 15 games including losing five of the first six on their current east coast road trip and the Giants are 5-11 in their last 16 games which included a six game losing streak that was snapped yesterday. Since June 13th, the Dodgers are the only NL West team to have a winning record, and all five NL West teams have been outscored by their opponents since that date.

When the disastrous game against Washington in which Tulowitzki, Fowler, and Gonzalez all had to leave occurred, Colorado was averaging 4.93 runs a game. They were able to keep the bats going for the first three games with a depleted lineup as they scored 22 runs in a three game set against the Phillies, but since that time, they have managed just 2.92 runs over the last 13 games.

As it relates to impact on the lineup, the Rockies have lost three of their four best hitters even though only one actually hit the DL. So far this season, the Rockies have gotten a 1.048 OPS out of Troy Tulowitzki, a .983 OPS out of Michael Cuddyer, a .967 OPS out of Carlos Gonzalez, and an .863 OPS out of Dexter Fowler. Nobody else has an OPS over .800. Since June 13th however, Tulo has been on the DL, Fowler has only started six games due to the injured hand and has just a .514 OPS when he's in the lineup, and Cargo has just a .596 OPS in his last 13 games.

The drop off in Cargo's production is just another reason to despise DL stints from Tulo. Not only do the Rockies lose Tulo's production when this happens, but they lose much of Cargo's production as well. Unfortunately, we now have a fairly large sample size to compare how Cargo has done with and without Tulo on the DL and the numbers are remarkable. 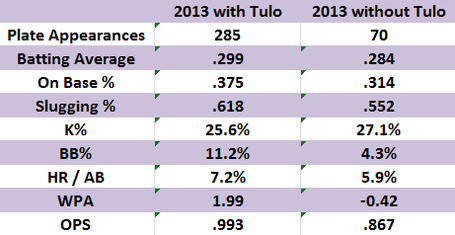 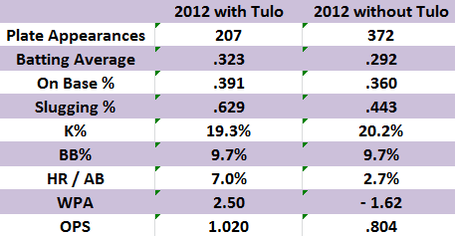 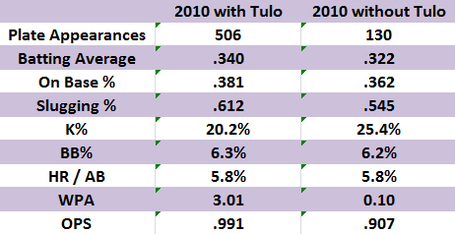 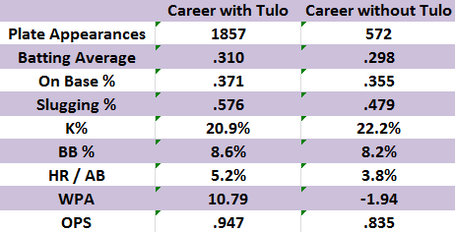 While I knew there would be a difference in production, I was shocked to find out just how large it was across the board. As crazy as I found the .112 point OPS difference though, the number that actually stuck out to me the most was WPA (Winning Percentage Added) - For those not familiar with this metric, it's basically a quick measuring stick that calculates how much a player's at bats added or subtracted to the team's chances of winning. In short, a hit during a tied game in the ninth will count MUCH more than a hit during a blowout game in the fourth.

Those career WPA numbers, (10.79 "with Tulo" and -1.94 "without Tulo") point towards one of two things happening when Tulo is hitting next to Cargo. Either Cargo is just significantly more comfortable knowing that if he doesn't get the job done he has Tulo to pick him up, or opposing pitchers feel like they have to give Cargo much juicier pitches not wanting to walk hitters in front of Tulo. Either way, this lineup is going to get a huge boost when Fowler and Tulowitzki are back.

If you want to read more about the subject of lineup protection and if it exists or not, our own Drew Creasman wrote about this subject back in the early spring. Part 1 - Part 2.

Xavier Nady had signed a minor deal with the Rockies as the try to acquire more outfield depth with the Tyler Colvin experiment is off to a disastrous start.