Monday Rockpile: It's time for the Rockies to get better

The Rockies need help at first base if they are going to win the West. If they want to make a splash, Edwin Encarnacion and Kendrys Morales are two players they should be pursuing.

Share All sharing options for: Monday Rockpile: It's time for the Rockies to get better

The rest of the NL West may have just missed a golden opportunity. They had their chance to take the Rockies out of the race and failed. Despite a dreadful month of baseball, Colorado somehow enters the All-Star break just 4.5 games off the division lead and will begin the second half of the season on Friday with what on paper will be as strong of a 25 man roster as they've had all season. Now that they are getting healthy, it's up to them to make the rest of the division regret letting them hang around.

The June 13th game against Washington, which effectively wiped out the contributions of both Troy Tulowitzki and Dexter Fowler for a month did everything Colorado fans feared. It took two of the four best bats out of the Rockies lineup, and protection away from a third in Carlos Gonzalez who has seen his numbers suffer over the last 26 games with just a .302 OBP and .797 OPS (despite a .345 BABIP). This combined with some of the worst offense in baseball from the first base position led to some unimaginably awful numbers which I'm going to highlight now.

Over the last 26 games, the Rockies as a team have averaged just 2.84 runs a game, they're hitting just .234, their OBP is .284, and their OPS is .627. To make matters worse, 31 of the 74 runs the Rockies scored during this stretch came in just four games, meaning they averaged LESS THAN TWO RUNS A GAME DURING THE OTHER 22!!!

The Rockies have gone just 9-17 in their last 26 games, but they could have easily gone about 6-20 as five of their nine wins in this stretch came when the pitching staff allowed one run or less with a sixth coming when they allowed just two runs in San Diego last Monday. This team has also lost four games in their last 26 when the pitching staff has allowed two runs or less.

When you park adjust these numbers, they somehow look even worse. Over the past month, the Rockies have a wRC+ of just 65 as a team!!! - 65!!!!! Not only is that the worst in baseball (six markers below the Houston Astros who sit with a wRC+ of 71 during this stretch), but it's miles below the third place team on the list with a wRC+ of 80. While the bottom of the rotation has gotten some much deserved attention for not getting the job done, it's the offense that's been truly disastrous recently.

However, all of this may be about to change. If everything goes well over the next few weeks, Colorado has a chance to turn what's been a major weakness of late back into a strength. The most obvious form of this transformation will come with the continued return of Dexter Fowler and the literal return of Troy Tulowitzki. (Tulo did physically return this weekend against the Dodgers, but he went hitless in the series and saw his fWAR drop from 3.9 to 3.5 and his rWAR fall from 3.7 to 3.1 as he tried to knock off the rust from missing 25 games of action. We should see the return of the Tulo we all know and love after the break.)

There's also another way this team can get better though. Take a look at the Rockies fWAR by position so far this season. 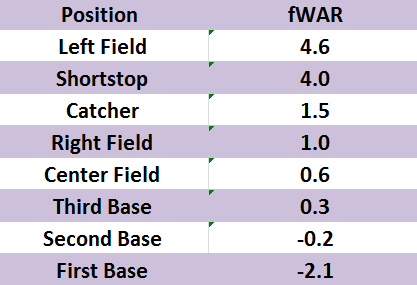 It should be pretty obvious where the Rockies need help, especially with much of the poor production from second and third base coming before DJ LeMahieu and Nolan Arenado took over those positions. If the Rockies truly consider themselves contenders this season, then they have to do something about the sinkhole at first base.

Jordan Pacheco must be forced off this roster and a player who can limit Todd Helton's playing time must be acquired. This doesn't mean Todd can't be an important asset to this team. He can still make it into a couple of games a week through a combination of giving the new everyday first base option a day off, coming in as a defensive replacement to preserve a lead, and pinch hitting during key spots late in games, but if the Rockies feel they really have a shot at the West, and I believe they do right now, then the second half of this season can't be the Todd Helton retirement tour. In short, the status quo at first base is unacceptable.

Here's a few options the Rockies might have if they are serious about making an upgrade here.

Purple Row's own Jordan Freemyer wrote about the case for going after Dunn on Saturday, but I don't agree with him. I view Dunn as an vastly overpriced one trick pony. He doesn't hit for average, he doesn't play a premium position, he's not good defensively, he'll be 34 later this year, his OBP is still below average despite his ability to take a walk because his average is that horrible, he's struck out over 30% of the time in each of the last four seasons, and he's been worth -0.7 fWAR and -1.5 rWAR since the start of 2011 over 1,505 plate appearances.

Adam Dunn has one skill and one skill only, the ability to hit the ball into the seats, and I don't think the Rockies should be willing to pay much for it considering his long list of shortcomings. Although the White Sox would likely be willing to eat some of his enormous contract, he's still owed half of $15 million this season and another $15 million next season which is an outrageous amount considering his skill set.

I'm just not a big fan of the "get Godzilla to the plate and see if he can hit it into Tokyo Bay" brand of baseball.

The Blue Jays are in big trouble. Not only are they 8.5 games out of the second Wild Card spot with four strong teams 5.5 or more games ahead of them this season, but it's extremely likely that their rebuilding project that could have given them a three year contention window has failed.

The starting rotation is a mess and it's unlikely to get much better anytime soon. Mark Buehrle and R.A. Dickey are 34 and 38 and have both been below average this season, Josh Johnson is a free agent after this year, Brandon Morrow has now been a below average pitcher for four of the last five seasons, and J.A. Happ hasn't show promise since 2010. The only thing holding that pitching staff together right is a lights out bullpen. To me, the Blue Jays look much more like a team full of assets that can acquire prospects this month than a team that's ready to contend in baseball's toughest division in 2014.

If the Rockies want to pry Encarnacion out of Canada, it's going to take parting with some coveted farm pieces, but I believe it can be done at a price that benefits both teams if Toronto realizes the direness of their situation. It would likely begin with both Trevor Story and a pitcher like Jayson Aquino and Dan Winkler and then include at least another piece. Perhaps they would even be interested in the upside of Josh Rutledge as they are very weak at second base.

In addition, Encarnacion is owed $9 million in 2014, $10 million in 2015 (his age 31 and 32 seasons), and has a $10 million team option ($2 million buyout) in 2016. So not only does an Encarnacion deal help the Rockies this season, but it helps the team maximize it's offensive potential during the heart of Tulo's and Cargo's prime years. Encarnacion's contact rate and age also make him a player that's unlikely to see his production rapidly decline in the near future.

Again, it's going to take moving some serious prospects just to make Toronto listen, and while I'm normally not someone who likes to sell off farm pieces, this is a deal I would seriously consider making. It can make the Rockies a much better team both this year, and in future seasons.

This is the option that our own Purple Row commenters PurpleToPurple and Muzia have been pushing for, and quite frankly, it's also a good one. Compared to Encarnacion, Morales would cost pennies on the dollar in terms of prospect to acquire. He would also fill the first base crater.

Morales has a career .819 OPS and seems to have largely recovered from that devastating ankle injury in 2010 that cost him nearly two years worth of playing time. He's played in pitcher friendly parks his entire career, so the hope would be that if you moved him to Coors, he would be able to post an overall OPS around .850 and give Colorado another reliable bat in the order.

One other thing to note is that unlike Dunn and Encarnacion, Morales is a free agent after this year. He's only making $5.25 million this season, but if he closes with a strong second half, he's likely to demand at least as much as Encarnacion makes a season, and possibly even a few million more with the way the market has exploded in recent years. He's not as good of a long term option as Encarnacion, but would obviously cost much less in farm pieces to grab.

4) Look for a right fielder and move Michael Cuddyer to first base.

This one has several possibilities both in house and on the trade market that I'll let you guys experiment with in the comments. Cuddyer has started six games at first this season and 26 at first last year so this is something the Rockies have briefly tinkered with in order to maximize their offensive output. If they can't trade for a guy like Encarnacion or Morales by the end of July, they may have to do it out of necessity quite a bit during the final two and a half months this season if they want to be playing meaningful baseball though September.

Eddie Butler (#3 PuRP) was brilliant yesterday during his one inning of work in the Futures Game. Butler reached 99 MPH with his fastball, had an amazing amount of movement, and made some very good young hitters look foolish.

One of the reasons David Wright picked Michael Cuddyer for tonight's Home Run Derby is that Wright modeled his game off the Rockies righty.

Cliff Corcoran breaks down all the contenders in tonight's home run hitting party.

William Boor has a little more on the Rockies 3-1 win yesterday.