Jhoulys Chacin, Jorge De La Rosa, and Tyler Chatwood may be better starting pitchers than anyone else in the division right now not named Clayton Kershaw, Madison Bumgarner, or Patrick Corbin.

Share All sharing options for: Monday Rockpile: Pitching in the NL West

I have two main reasons for this. First, the tools we use to measure offense, especially tools like OPS and wRC+, do an excellent job of nailing down the most important aspects of the game - And second, looking at a pitcher's production through this "backwards" state allows you to see things that you otherwise might have missed because you are staring at the numbers from a completely different perspective.

Of course, there's also limitations when viewing the game through this prism. Most offensive stats are not park adjusted, the range of a collective defense behind a pitcher could sway results one way or the other, and some starters will completely change their approach when the score becomes lopsided. However, as long as you are aware of these drawbacks, you can glean a tremendous amount of information by looking at offensive numbers against a starting pitcher.

So what I did today is take every NL West starter (minimum 40 innings pitched in that role) and arranged them by OPS (smallest to largest) in the table below.

NOTE: (Two things. 1) Even though Roy Oswalt and Drew Pomeranz don't have 40 innings in the majors this season, I added them because I wanted to include all Colorado starters. 2) I included Ricky Nolasco's total season numbers even though he was only recently traded to Los Angeles since he'll obviously be a big part of the division race from here on out.) 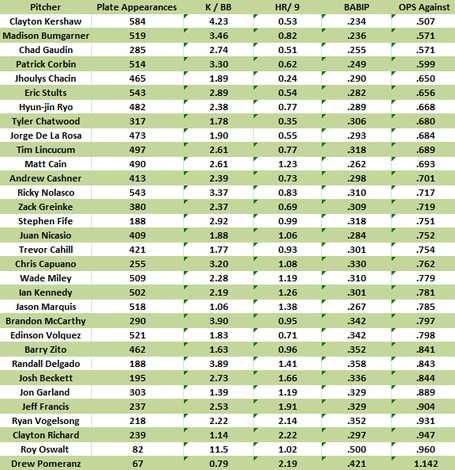 Many things that jump out at me in this table. Here's some of the most prominent...

1) The Rockies may have three of the six best starting pitchers in the division right now.

Remember, these numbers are NOT park adjusted. So in this case, Colorado fans get to play the "LOL Coors" card in reverse.

Even before you start adjusting for the extreme parks in this division though, Jhoulys Chacin, Tyler Chatwood, and Jorge De La Rosa rank very strong. There's 32 pitchers on this list, and the Rockies big three occupy three of the top nine spots. Take into account the parks these guys pitch in as well as the fact that Chad Gaudin has only made seven starts so far and I feel pretty confident in saying that the only three NL West starting pitchers I would rather have on the mound for my team right now are Clayton Kershaw, Patrick Corbin, and Madison Bumgarner.

If you look at the top 16 pitchers on this list, only four of them have a K/BB ratio below 2.00, and guess what, all of them play for the same team. It not like they've been extremely lucky either. The BABIP numbers against (.290 for Chacin, .306 for Chatwood, and .293 for De La Rosa) suggest that what they are doing is mostly sustainable if they remain healthy.

While some of this may be good fortune, the low K / BB ratios and high ground ball rates across the board from the Rockies best starters suggests that at least some of these results are by design. After all, if you had Nolan Arenado, Troy Tulowitzki, DJ LeMahieu, and Todd Helton playing behind you, wouldn't you want to get the batter to hit the ball on the ground too?

The propensity of ground ball pitchers to get injured, as well as the Rockies own injury history at this position, may also explain why you almost never see a Colorado starter get passed 100 pitches this season.

Juan Nicasio is a unique figure on this table in that he's the only Colorado pitcher to rank in the middle of the board. Everybody else is either up near the top or residing in one of the bottom six slots. As we all know by now, the drop off in production between the #3, #4, and #5 spots in Colorado's rotation has been immense this season, and Nicasio seems like the team's best chance of stabilizing one of the bottom two rotation slots right now short of a trade.

Nicasio is a major wild card in that we've seem him look terrible several times this season, but he's also started to pitch better as of late. In the incredibly small sample size that is Nicasio's last three starts - His last start at AAA and his first two back in Denver - Nicasio has pitched 20 innings while allowing just one earned run (good for a 0.45 ERA), surrendered just 11 hits, struck out 14, and only walked three.

Only time will tell if this is the beginning of a pitcher finding his groove or a meaningless blip on the radar screen, but after what this club has seen from the bottom two slots of this rotation this season, everyone will certainly take it. Anything that can help the Rockies play close to .500 baseball when Chacin, De La Rosa, and Chatwood are not pitching could significantly improve this team's fortunes going forward.

After two consecutive seasons of magically turning into an above average pitcher out of nowhere for the Giants, Ryan Vogelsong finally reverted back into the guy who wasn't good enough to pitch in the majors from 2007 through 2010. I was thoroughly enjoying each and every one of his abysmal starts this season before his unfortunate injury back in May.

The Giants seemed ill prepared to fill a void in their starting rotation - After all, they hadn't had a real meaningful starting arm in their rotation go on the DL in three years. But this is the luckiest team in the history of human civilization, so in this case, an injury to a starting pitcher when they had no starting pitching depth is actually going to help them.

Enter Chad Gaudin who hadn't started a game since 2009 (!!!) and has been a below average pitcher out of the bullpen every year since he was with Oakland all the way back in 2008. What does he do as a Giants starter? He holds opposing batters to the lowest OPS of anyone in the division not named Clayton Kershaw. Granted, it's only seven starts so I expect some massive regression here, but I am so, so tired of this team finding winning powerball tickets in their gutter.

Not that this should be news to anyone, but what Kershaw is doing is absolutely ridiculous. He literally does everything well. The Dodgers should give him about a half billion dollars, and actually, that might not be too far off what happens.