Purple Row Video: What WPA tells us about the Rockies - SPOILER ALERT - It's not good

The Rockies are a better team on paper than they've shown on the field, and it's mostly because of their inability to turn their offensive talent into meaningful runs.

Share All sharing options for: Purple Row Video: What WPA tells us about the Rockies - SPOILER ALERT - It's not good

In this episode of Purple Row video, I dive into what I believe is one of the biggest shortcomings plaguing the 2013 Rockies - Their inability to translate their overall individual offensive numbers into meaningful runs during key spots in games.

In order to do this, I have three charts related to Winning Percentage Added (WPA). If you're not familiar with WPA, here's a link that briefly explains the metric. The first is the WPA of all 18 players on the Rockies this season who have at least ten plate appearances and are not a pitcher. Only four have produced a positive WPA and six are more than a full win to the negative side. 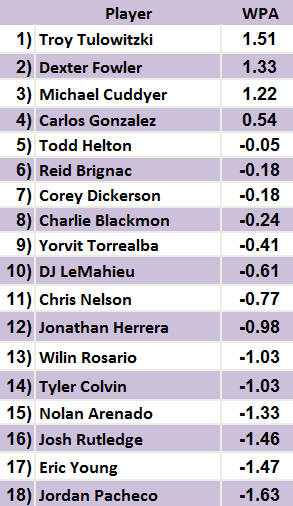 The second chart is even more depressing. Here, we compare the overall OPS of each team in the division to their team total WPA. Despite having the highest OPS of any team in the division, the Rockies are light years behind even the fourth place D'Backs when ranked by WPA. This chart may be the best example you can find if you want to illustrate just how much this team has underachieved at scoring runs offensively.

The third chart puts the 2013 Rockies into context against their peers of the past. In just 101 games, the 2013 ROckies already have a lower WPA than any of the previous 20 teams accumulated over the course of a 162 game season. In terms of scoring meaningful runs, the 2013 Rockies may be the biggest underachieving team in franchise history. 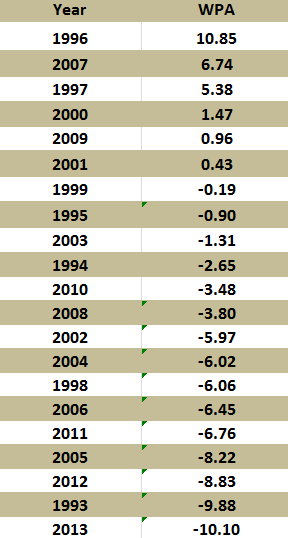 The Rockies are currently five games off the division lead and on pace to win 77 games with a team WPA of -10.10. Would they be in first place right now if they could have kept their WPA between 0 and -3.0?