The trading deadline, a bottom of the rotation problem that still hasn't been fixed, a rough schedule coming up for the Rockies, and more are all covered in today's Rockpile.

As the Rockies teeter of the edge of falling out of contention, many folks seem convinced that it's time for the team to start selling off pieces. Here's the problem with that line of thinking though, there's very few pieces on this roster that make much sense to move right now when you go through each phase of the game.

Offensively, the Rockies best pieces are Troy Tulowitzki, Carlos Gonzalez, Michael Cuddyer and Dexter Fowler - All of which are under contract for at least the 2014 season. In the rotation, the Rockies have Jhoulys Chacin, Tyler Chatwood, and Juan Nicasio who are all under team control for several more seasons, and Jorge De La Rosa who has a team option for the 2014 season. In the bullpen, the Rockies most notorious players are Rex Brothers, who is locked up for several more seasons, and Matt Belisle and Rafael Betancourt who both have mutual options with the team for next season.

When a team is looking to sell pieces at the trading deadline, they are going to move players who A) are enticing to other teams this season, and B) are not under their control during the next year they have a realistic chance to contend for a playoff spot. This makes it very difficult construct a logical "the Rockies should be sellers" argument, because all of the Rockies best pieces right now are also under contract for the 2014 season, a season which the Rockies believe could bear fruit.

There is a school of thought that involves the Rockies getting as much as they possibly can right now for players like Michael Cuddyer (his value will never be higher) and Matt Belisle, but again, if the Rockies see both of these players as part of a blueprint that can contend in 2014, then they are not going anywhere unless Colorado is offered the moon.

The idea that the Rockies shouldn't be buyers at this point is reasonable to me, especially with the farm system getting close to the point where it can start consistently providing impact talent to the big club, but the makeup of the current roster combined with an unusual group of contracts makes the Rockies very unlikely to sell. This may be one of the rare moments where the best move the Rockies can make is the one they don't make at all.

2) Who will be the next pitcher to get a crack at the Rockies #5 starter job?

Colorado has now lost 12 consecutive games not started by Jhoulys Chacin, Jorge De La Rosa, Tyler Chatwood, or Juan Nicasio. In fact, the last game the Rockies won not started by one of the pitchers was Jon Garland's last start in a Rockies uniform. (Ouch!)

The Rockies desperately need someone in this spot who can give them a chance to take a few of these games. It's very difficult to make a run when you have what amounts to a near guaranteed loss every fifth game. It's reasonable to expect the Rockies to have a losing record when the #5 starter takes to hill, it is not reasonable to lose 12 straight games when that happens.

With Jeff Francis getting recalled yesterday to join the team in a relief role, I hope the Rockies decide on an option our own "NorthSider1964" has been pushing for a little while now - Make Adam Ottavino the #5 starter. Ottavino currently owns a 2.98 ERA, has held opposing hitters to a .676 OPS this season, and generally does a decent enough job of attacking the strike zone.

Granted, much of this work has come in low leverage relief appears, but at this point, could Ottavino possibly be much worse than some of the other options the Rockies have trotted out there recently? In addition, Francis's call up makes replacing Ottavino's role easy as Jeff can slide nicely into that slot.

Ottavino would also have to be stretched out over a couple of starts, but a plan where he throws 60 pitches in Thursday's game and then 75 in a start after that with Francis acting as the piggy-backer seems well within reason.

3) The Rockies can't stay on the field

Carlos Gonzalez, who is currently nursing a finger injury and trying to avoid a DL stint leads the Rockies in games played this season with 98. The next closest player on this list is Wilin Rosario with 85. With 106 games in the books, it's very likely that the Rockies will have just one player on their roster reach 140 games played this season, and if Cargo is forced to the DL, that number could be zero.

This, among other things has helped push the Rockies "Drag Factor" score up to unacceptable levels during the summer months. (Here's a link if you are not familiar with the "Drag Factor" method I introduced here at Purple Row) The Rockies big four of Troy Tulowitzki, Carlos Gonzalez, Michael Cuddyer, and Dexter Fowler have been exceptional at the plate this season, but there's just too much negative offensive production getting into the lineup on a consistent basis. Here's the latest "Drag Factor" table along with a comparison of this year's "Drag Factor" score to recent Rockies past (last ten years). 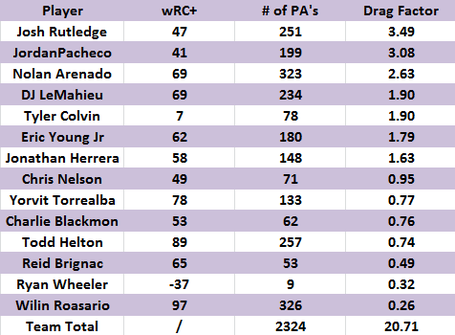 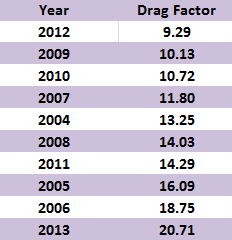 Unfortunately, this year's Rockies team has more "Drag" in it surrounding the stars than any Colorado has put on the field in the last decade. It's not really one big problem either (although Jordan Pacheco not being on the Roster would help matters), it's a combination of several different players, some of which (Nolan Arenado and DJ Le Mahieu) play such spectacular defense, that you just take whatever offensive production they give you and run.

However, this overall lack of production outside of the stars has helped take the wind out of the sails of a core that's good enough to be the engine of a 90+ win team if it had neutral pieces surrounding it.

Unless there's more names on this particular list that we know about, the NL playoff push is going to be largely unaffected by any penalties that MLB is going to hand down in the coming days.

The same can't be said for the AL with Bartolo Colon, Johnny Peralta, Alex Rodriguez, and Nelson Cruz all possibly staring down the barrel of a season ending suspension. Removing these players from the landscape would significantly alter the path to the pennant and make life easier for teams like Tampa, Boston, Baltimore, and Cleveland.

Bartolo Colon has been by far the A's most productive starter this season, Nelson Cruz has been the Ranger's second most productive hitter this season, Johnny Peralta is an above average bat that holds down a middle infield position for the Tigers, and Alex Rodriguez is the only real hope the Yankees have of correcting their lack of third base production (They rank last in OPS from that position this season). Think for a moment about how much more difficult it's going to be for any of those teams to advance to the World Series if MLB is able to bring down the hammer on the Biogenesis suspensions sooner rather than later. This has the potential to alter the entire American League season.

5) What does the Dodgers hot streak means to the Rockies?

As underwhelming as the Rockies 5-5 home stand was, the bigger problem was the Dodgers going 9-1 over the same stretch of games. The ten games following the all star break appeared to be a favorable segment of the schedule to pick up ground on Los Angeles, but instead, Colorado actually lost four precious games before they enter a stretch where they now play 20 of 26 on the road. In short, the math doesn't look good.

The Dodgers have gotten so hot, they've actually now pulled within two games of the Reds in the standings, and while that's not significant for them, it could become significant to Arizona and Colorado. The Reds currently hold the second Wild Card spot and if they continue to show the type of offensive futility they showed this weekend in LA, they could be a candidate for the late season collapse team. There's been quite a few of those recently.

Last year the Pirates crashed from a seemingly promising summer to another sub .500 season, and the Dodgers actually led the Giants as late as August 19th before hitting a 12-20 stretch late in the game. In 2011, both the Braves and Red Sox blew seemingly locked up playoff spots with horrid Septembers, and in 2010, the Padres were 6.5 games up in late August before closing the season on a 14-23 slide and gift wrapping the division away to San Francisco.

The bottom line is that late season collapses out of nowhere by teams who have played good baseball for over a 100 games is actually a pretty common thing. This doesn't mean we should expect it out of the Reds or Dodgers, but if it does happen this season, then the Rockies need to get into a position where they can take advantage of it.

A good goal for this extremely tricky 26 game stretch might be 16-10. That would put Colorado two games over .500 with 18 of the next 27 at home leaving them in position to make a possible last second charge. Even if they don't make a postseason run though, playing good baseball and winning more games like they won yesterday could go a long way into jump starting into the team it needs to be in 2014.

With no living player inducted into the Hall of Fame this summer, David Schoenfield takes a look at a list of 40 active players and evaluates their chances of making it to Cooperstown. Two Rockies are discussed here.

Ken Rosenthal talks about how fast things have turned sour for the Giants and has updates from all around baseball.

Terry Frei believes the Rockies are better than their record.