Monday Rockpile: 46 games to learn from

The Colorado Rockies saw their offense completely disintegrate for the better part of a 46 game stretch this season. Is there anything they can learn from this experience to help prevent it from happening again the future?

Share All sharing options for: Monday Rockpile: 46 games to learn from

Less than two months ago, the Rockies began an east coast road trip in Toronto just a half game behind the then division leading Arizona Diamondbacks, and seven games ahead of the now first place Los Angeles Dodgers.  At the time, the club was four games over .500, and it appeared likely they would be playing meaningful baseball through much of the summer.  Arizona, San Francisco, and San Diego all showed enough holes that it was unlikely they were ever going to get very far above .500, and the Dodgers were buried 12 games under .500.

In other words, the only way that meaningful baseball was not going to be played at Coors in August (from where we stood in mid June) was if the Rockies went ice cold, and one of the other teams in this division played well above the talent level on their roster.  Alas, that's exactly what happened.  The Rockies went just 15-31 in their next 46 games, and just a few days later, the Dodgers began their historic hot streak which now has them at 37-8 in their last 45 games.  (That would put them on a pace to win 133 games if extrapolated out to a full season)  Since the Rockies began play in Toronto on June 17th, they have lost a full 20 games (!!!) in the standings to Los Angeles.

Well for one, the Dodgers sent the "85/86 wins has a real shot to take this division" theory up in flames in full Hindenburg fashion.  It's easy to look at them now and just accept the fact that they are likely to win over 90 games, but less then two months ago, they were sitting at 30-42 needing to go 56-34 just to get to the 86 win platform that looked like it could take the NL West.  (56-34 comes out to a .622 winning percentage.  Over 162 games, a .622 winning percentage would give a team 101 wins.)

So amazingly, a Rockies team that now finds itself 13 games out in mid August, had real reason the believe the division was there for the taking in mid June.  Both the fans who were high on the team then, and the fans who are low on the team now are justified in their analysis.  The Rockies have done an absolutely horrible job of putting themselves in position to get to that mid 80's win territory, but as it turns out, it likely wouldn't have been anywhere near good enough to take the division anyway.

Let's focus on why the Rockies haven't been anywhere near good enough to get close to that number in recent weeks though.  I've seen many fans just pile onto the 2011 and 2012 seasons and chalk this up to another disastrous year, which on the surface is technically true, but the factors that caused the 2013 Rockies to derail are vastly different than the ones that led to the demise of the last two teams.  All you have to do to see this is take a very broad look at the pitching.

In 2011, after Jorge De La Rosa was lost to Tommy John surgery and Ubaldo Jimenez was traded away to Cleveland, the Rockies surrendered 5.17 runs a game in the second half of that season.  An injury to Jhoulys Chacin the following April, and Jeremy Guthrie proving to be as soft as melted ice cream in this environment further fueled the flames, and the Rockies' runs allowed soared to an astonishingly poor 5.49 runs a game in the 2012 season.

The turnaround here has been pretty dramatic in 2013 however.  The Rockies said they came up with a plan before the season started that involved keeping the ball down in the zone and limiting the number of home runs opponents hit against the staff, and there's some pretty significant evidence that their system is working.  Despite calling Coors Field home, Colorado pitching has allowed fewer long balls this season than any other staff in the division, and the number of runs they allow per game has dropped a full run from last season down to 4.46.  This isn't to say the staff doesn't have its issues, especially when it comes to depth in both the rotation and bullpen, but it does show that the team has made significant strides in this department.

What's also interesting however is to look at the runs allowed per game in 2013 during those two different sections of the season I talked about above.  In the first 70 games when Colorado went 37-33, the Rockies were allowing 4.49 runs a game, and in the next 46 games where Colorado went just 15-31, the Rockies were allowing 4.57 runs a game.  Granted, there was an uneven balance of home and road games during these two stretches, but even taking that into consideration, the numbers tell us that the offense was the real culprit to this year's slide.

In this chart, we'll compare the numbers from the opening 70 games to the following 46. 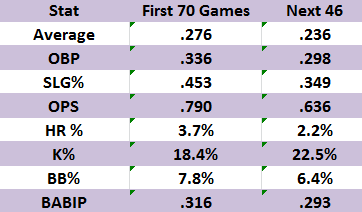 Several numbers here are overwhelmingly horrendous but the .636 OPS really stuck out to me for some reason.  So I went back month by month through Rockies history and wanted to find out just how rare that number is for a team that calls Coors Field home.  So here's all the months in franchise history that the team put up an OPS below .700. 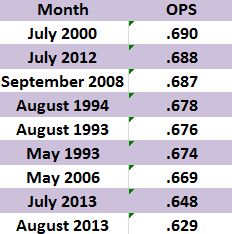 Now the stat I'm about to give you is a little bit loaded since this team has played half its history without a humidor and runs are down across baseball in 2013, but it still holds some pretty serious water.

Two months ago, the Rockies never had a month in franchise history where the team posted an OPS below .669.  Now, if they don't finish August strong, they could have two in a row.  Remember, they already had a 46 game stretch before this weekend's sweep of the Pirates where they posted just a .636 OPS over 46 games, so with another long east coast road trip coming up and Carlos Gonzalez on the DL, it's certainly possible.  Hopefully this weekend's series against Pittsburgh was a sign of the bats coming out of their funk and not just a blip in an even longer stretch of historical offensive futility for this franchise, but only time will tell.

Breaking it down on an individual bases, here's what all the Rockies with at least 50 plate appearances did during that 46 game stretch. 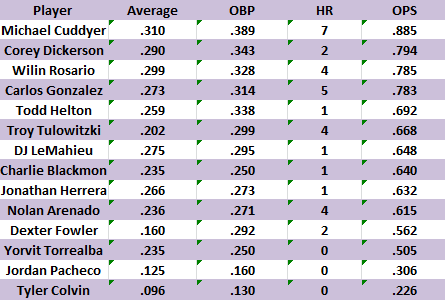 This tells the story in much greater detail.  In the first 70 games of the season, the Rockies had four huge bats carrying the team in Troy Tulowitzki, Carlos Gonzalez, Michael Cuddyer, and Dexter Fowler.  Lately, they've had just one in Michael Cuddyer.

Tulo came off the DL nearly a month ago, but the player the Rockies got back hasn't remotely resembled the one they lost to a broken rib.  He's striking out more, struggling to turn on the ball consistently, and missing several pitches that he was riffling into bleacher seats and outfield gaps earlier in the year.  Some of this has to do with bad luck and his .228 BABIP since returning from injury, but it's obvious watching him on a nightly basis that he still has not found that groove he was locked into for the first two and a half months of the season.

Fowler has been a similar story, although he's such a streaky hitter in general that he's harder to read.  Dex has a BABIP of .192 in the 46 game stretch I've been highlighting, but some of that may be due to the hand injury and his inability to drive the ball the way he did earlier in the season.  In 138 plate appearances since getting his, Dex has just six extra base hits.  Compare that to his first 277 plate appearances of the year where he had 24 extra base hits and it's clear that it's not all just bad luck.

Speaking of lost slugging percentage, that's exactly what appears to have happened with Carlos Gonzalez.  Since first suffering the finger injury in Arizona that landed him on the DL a month later, Gonzalez has just three extra base hits in 62 plate appearances.  His slugging percentage also flipped from a league leading .619 before the injury, to a more pedestrian .418 since.

The Rockies were unlucky to have the injury bug bite them here, but to me, this is also just another reason why the Rockies high Drag Factor score (inability to surround their top for hitters with a supporting cast that does not consist of several below average bats) is a big deal.  It also underlines how important it is for guys like Rosario, Arenado, and Dickerson to become impact bats in the future.

I'm very confident that Tulo, Cargo, and Dex will be fine and return to their normal selves in the long term.  However, they need  a supporting cast if the club truly wants to take advantage of the strides they've made pitching wise as we head into the future.  These final 43 games could go a long way into determining which bats may be useful going forward, and which ones need to be exterminated from next year's roster.

Patrick Saunders talks more about Nolan Arenado's game winning double in yesterday's win that completed a sweep of the Pirates.

He also discusses Wilin Rosario's start at first base in yesterday's game.

Alex Kienholz has an excellent breakdown of Jhoulys Chacin's "PITCH f/x" profile.  This off season might be a good time to start talking about an extension for Chacin.