"Making things look alike that are not alike is the key," says former Colorado Rockies pitching coach Bob Apodaca. The same could be said about me appearing to be a journalist (making it look like I knew what I was doing), but there I was sitting in the home team's dugout talking to the Bob Apodaca about pitching.

Apodaca is currently serving as a Special Assistant to General Manager Dan O'Dowd. He has spent time moving between Rookie-ball Grand Junction, short-season Tri-City, and Low-A Asheville, working with the clubs youngest, rawest, most volatile, and most promising pitchers in their early stages of professional development.

I have seen Bob Apodaca, on television, walking to and from the mound literally hundreds of times in my life. I have, hanging in my bedroom, a newspaper clipping reporting Ubaldo Jimenez's no-hitter in Atlanta that features numerous references to and quotes from the longtime Rockies pitching coach.

Regardless of how anyone feels about his reassignment or his years as pitching coach for the major league team, Apodaca has forgotten more about pitching than most of us will ever know. I was lucky to get a chance to speak with him about pitchers at all levels of the organization.

We begin with budding young prospect Eddie Butler. "The big thing right now for Eddie is that movement on his fastball. It's getting a lot of break." He explains to me that one of the possible reasons for this recent ascension from interesting pick to possible star was a simple fix in mechanics. "Players don't usually want to talk mechanics," he tells me, "but Eddie has the great ability to learn and apply."

"He has all the tools to be a great pitcher."- Bob Apodaca

The mechanic in question is "consistency with where he broke his hands out of the glove." He describes how Butler would change his "timing over the rubber" for when he would separate his hands and remove the ball from the glove. I ask if this tipped his pitches. He acknowledges this possibility but argues that more importantly it was about "making pitches look alike that are not alike."

"Getting him consistent," he says, "helps make all his pitches look the same until they get to the plate."

"Eddie is also extremely athletic and his own harshest critic," Apodaca tells me. "That can be both a good and bad thing. But he definitely has the tools to be a great pitcher at the next levels."

We both marvel at how well Butler had pitched in the Futures Game before our conversation wanders elsewhere....

"We have this kid going tonight that has a dominant fastball," Apodaca muses.

The starting pitcher for the Grand Junction Rockies that evening is the organization's highest rated prospect; Jonathan Gray. "With him," says the pitching guru, "it's less about movement of the fastball, since he is more strictly a 4-seem thrower, and more about the plane on his fastball."

A conversation with Jonathan Gray 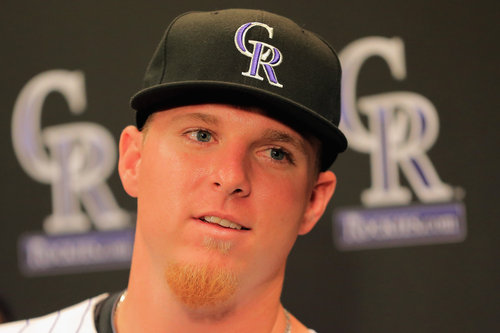 Drew Creasman spoke with Jonathan Gray earlier in the season.

This is another version of making things look alike that are not alike. Some pitchers fool people with movement, and Gray can accomplish that with his "very good slider," Apodaca says, but Gray can fool hitters with the fastball because of its velocity and because he throws it on a plane that makes it difficult to pick up.

With Gray, you may be able to recognize the fastball but by the time it gets to you, it may be two or three inches higher, or further inside than it looked out of his hand. When it's coming in at 95-101 miles per hour it can be difficult enough to hit, but when the pitch moves on a deceptive plane it causes a great deal of weak contact and whiffs.

"He has also made a lot of progress on that change-up," beams Apodaca. "His thing right now is not worrying too much about results. See the forest through the trees. Make sure you are learning to throw the quality ball. He is getting better at the best kinds of pitches, which are the ones that look like a ball and end up a strike or look like a strike and end up a ball."

That, "more than just sheer velocity which professionals can hit," will ultimately determine Jonathan Gray's success as a pitcher.

I tell him that for selfish reasons I was happy to learn that they had been working so hard with Gray on the change-up because that suggests they view him as a future front-of-the-rotation starter and not a two-pitch relief guy. "And I think that's the plan," Apodaca says. "We think he can be that kind (front-end) of starting pitcher for us."

Through the course of a conversation that is more about pitching philosophy than any particular pitcher, Bob Apodaca and I speak briefly about several pitchers in the Rockies system and I thought this would be a good time to share a few of those thoughts.

I tell him that I liked what I'd seen from Zach Jemiola and asked if he had been impressed with any of the other Rookie pitchers here in Grand Junction. "You just mentioned one," he says of Jemiola. "He has a lot of confidence in his change-up. Great kid too. Pitches with a lot of confidence." 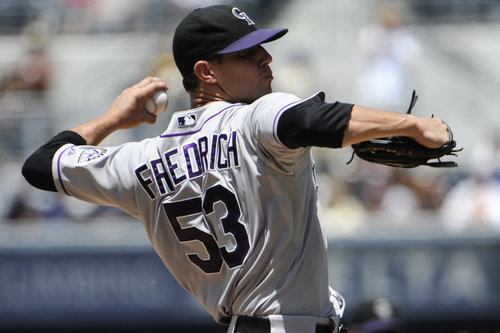 Charlie Drysdale looks at pitching prospects who could help in 2014.

When on the subject of quality change-ups, I mention that I thought Jorge De La Rosa had an underrated change. Apodaca agrees: "One of the best." But De La Rosa needs something more, Apodaca adds: "He needs other out pitches though. He can rely on that change for strikeouts a little too often. He could start throwing the inside fastball more often. The great thing about Jorgy (the affectionate nickname many close to him have taken to calling De La Rosa) is that he always wants to get better."

We talk about how good Jhoulys Chacin and Tyler Chatwood have looked in 2013. "The big boys need you back!" someone shouts down during the interview. "Oh, the pitching has been pretty good!" he fires back.

He tells me that they don't really talk with their young pitchers about the altitude. Instead, they try to focus on principles of pitching that should be effective anywhere. "I don't care if you're pitching on Mt. Everest," he says. "If you can stay low in the zone and control the inside part of the plate you will be successful."

I mention that the recent focus on pitching to weak contact, as opposed favoring the strikeout, seems to be working at the major league level. "It's not just about keeping the ball low, is it?" I ask. "That seems a little over-simplified to me."

"It starts with pitching low but I agree, you have to be able to surprise the hitter up or in on occasion."

We talk about how those surprise pitches up in the zone, or in on the hands, can cause ground outs as well, but Apodaca says that keeping the ball low is mostly instrumental in preventing the home run, something the Rockies' best pitchers have excelled at this season.

"It's really all about what pitch and where." - Apodaca

"There is a lot we work on with these guys, including controlling the running game. But it is also important not to over-coach." For both pitcher and coach, he says, "A lot of patience is required. It's really all about what pitch and where."

Pitching at any level is a mind-game wrapped in a self-confidence battle all under the scope of a one-on-one bout of execution, luck, and singular moments of triumph and failure. Pitching is a tug-of-war over an invisible cube shaped zone stretching across the plate, from the hitters toes to the letters on his jersey. Pitching is a science and pitching is an art.

A professional pitcher is a special breed of person, even more so the more successful they become. And so are pitching coaches. I can't thank Bob Apodaca enough for taking the time to talk with me and share his insights. As we part ways he remarks that he had genuinely enjoyed our conversation, that he had found it entertaining and interesting.

He actually thanks me for the time. Apodaca is a class act who clearly loves what he does. His mantra of making things look alike that are not alike may revolve around deception, but there is unrelenting truth in the way he converses and when he says "we are going to enjoy watching these pitchers grow."

I for one will definitely enjoy it and I will remember that, even if he isn't on my TV every day anymore, Bob Apodaca has been instrumental in giving the Rockies organization and its fans plenty of reasons to be excited about the future.

DC in GJ: Getting to know the 2013 Grand Junction Rockies