Monday Rockpile: August doldrums, and the things they make you think about

The Rockies are not making the playoff in 2013, but what's the best thing that can happen in these final six weeks to help them build for 2014 and beyond? The answer may not be what you think.

Share All sharing options for: Monday Rockpile: August doldrums, and the things they make you think about

We've reached a state of the season Colorado fans have become sadly familiar with over the last three seasons. It's mid August, the team is all but mathematically eliminated from the playoffs, the buzz of the All Star festivities and trade deadline have passed, and we're still a couple of weeks away from September call ups and that final push to the season's finish line. It's probably the least fun time of the regular season to be a baseball fan if your team is not playing meaningful games. Not only is it a buzz kill, but you also have to deal with the joy of other fan bases in cities where pennant fever fills the air.

It's rather depressing actually, this feeling of knowing that there's all kinds of awesome, meaningful baseball is about to unfold over the next couple of months - Only just not for you.

But this year things are a bit different. If you look around the National League, there's not much in the way of close races unfolding. The best thing going right now is the three horse race for the NL Central between the Pirates, Cardinals, and Reds, but beyond that, things are about as tame as possible. The Braves are going to win the east, the Dodgers are extremely likely to win the west, and five games separate Cincinnati and Arizona for the second wild card spot. Or to put it another way, we are one Arizona slump away from going into the final three weeks of the season knowing who all five NL playoff teams will be ahead of time.

The American League still has plenty of drama, but what could be happening in the NL is absolute worst case scenario for baseball. It's not anyone's fault either, it's just that things have broken as badly as they could possibly break. If you want drama, you almost have to root for Arizona (and perhaps Washington) over the next few weeks.

However, if you're looking for a darker and more under the radar side of drama, consider this. Below are the reverse standings for the bottom 16 teams this morning - In other words, the order of the 2014 MLB draft if the season were to end today. 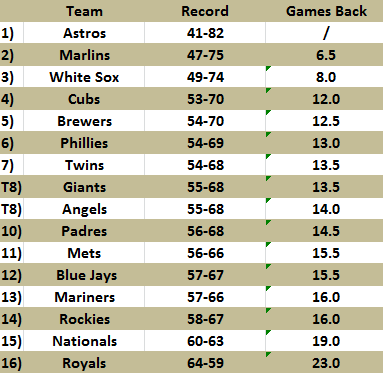 Take specific note of the logjam between the fourth place Cubs and the 14th place Rockies. There are 11 teams currently separated by a mere four games in this usually ignored region of the standings. With just under 40 games to play, this brings us to the question nobody really wants to ask but has to be addressed.

"At what point (if any point) does it start to make sense for any of these teams to lose games on purpose?"

Normally I don't think it ever makes sense to tank in baseball. It's not like the NFL and NBA. There's just too much uncertainly with the draft, the players are too far away from the majors, and it doesn't make any sense at all to disrupt anything you're trying to establish with fringe players currently on the bubble of the major league level.

For instance, it would make no sense for Miami to start losing more games right now and try to secure the second draft slot for the reasons mentioned above. However, if the pileup of teams between fourth and 14th remains this tightly packed as we get into the final 20 games or so of the season, a compelling argument could be made to start... oh, how shall I put this nicely? Not fully commit to winning every single night?

The case here would be three layers deep.

2) Early reports indicate that the 2014 draft class has a chance to be the strongest crop of players since 2005 when Troy Tulowitzki, Andrew McCutchen, Ryan Zimmerman, Alex Gordon, Justin Upton, and Ryan Braun all went in the first 11 picks. I don't know if we're ever going to see another draft like 2005, but even if we're only a couple of steps down from this level of talent, the difference between picking fourth and 14th could significantly alter the chances of nabbing a high impact major league player.

(If you're a prospect hound and want to get an early jump on some of next year's names, here's a good link to start.)

3) The logjam also centers around a very important cutoff after pick number ten in that teams who sign big name free agents who were given qualifying offers from their previous club must forfeit their first round draft pick. However, if a team has a top ten pick, their first selection is protected and they forfeit their second pick instead. So for teams who have their eyes on outside help this winter, the difference between the tenth and 11th pick could be enormous because it will be much harder to pull the trigger on a free agent given a qualifying offer if the penalty is lose pick No.11 as opposed to lose Pick No. 45.

Okay, so those are the major points in favor of losing games down the stretch in what could be a very unique scenario to 2013. However, I still find an all out tank job from any team unlikely. In addition, even if someone did try it, there's the issue of actually executing it properly. The players are too competitive and many have too much respect for the game to do anything but try and win every game once they're out on the field. (This is especially true if they are facing a team on the playoff bubble. The Brewers and Cubs for instance will play several division games against the Pirates, Cardinals, and Reds in September and can't undermine the race for the NL Central crown.) Furthermore, there's enough players fighting for their big league lives on most of these teams that they need to put up the best performance possible just to stay in the majors.

If you were going to try and leapfrog some of these teams in next year's draft, the strings would have to be pulled from above. For instance, if the Rockies were to do something along these lines, it would come in the form of being "extra careful" with Carlos Gonzalez and Tyler Chatwood by keeping them on the DL just a little bit longer and making sure they are healthy for 2014. It could also come in the form of starting more fringe players when the rosters expand. So maybe the lineups see quite a bit of Charlie Culbertson, Jordan Pacheco, and Josh Rutledge as the team tries to see what it has in these players going forward.

It's a very uncomfortable subject, and while I don't think any teams will outright lose games on purpose, I do think some will try to find ways to put themselves in a position where short term losses (not putting their best nine on the field every day in September of 2013) makes sense in a long term effort to grow and develop some of the young guys on the 40 man roster by giving them some major league playing time.

I almost centered today's Rockpile on how the 2013 Rockies are mirroring the season the 2006 Rockies had. But hey, they say a picture is worth a thousand words, so instead I'll just link this graph that compares the two seasons.

There's an insider article written yesterday by Scott Spratt ranking the top five shortstops in the majors today. Naturally I wanted to see where he ranked Tulo but didn't want to pay any money for it. So I did some investigating and found another article that gave me the answer. It also turned into a pretty good read about how Tulo is currently on track for a Hall of Fame career.

Troy Renck wrote am excellent piece about the comfort level hitters have using different bats over the weekend. The funniest quote came from Tulo when discussing the aftermath of the bat he used to hit 14 home runs in 15 games in September of 2010 breaking.

"I was running down the line with it in my hand after it broke. I didn't want to put it down. I think I cried. It was really bad. It was all the bat."

In other news related to Tulo, Jeff Passan is reporting that Tulo, along with Joey Votto and Matt Kemp were among the players Ryan Braun contacted for support when he tried to discredit the urine collector after he tested positive for performance enhancing drugs in 2011. IF true, this is a disgusting move on Braun's part.

Tulo has said today that Braun did NOT contact him to try and discredit the urine sample collector. Here's what Tulo said on the matter.

"I talked to him throughout the whole process. It was more as a friend. It wasn't anything more than that. He never tried to change my opinion on the subject or anything like that. It was more of me saying, ‘Hey, how is this going? Is this taking a toll on you?'"

Here's a piece from David Miller commending Tulo for how he's handling this situation.

For the first time all season, Jhoulys Chacin allowed more than two earned runs in a road start yesterday. He had a good excuse though, he learned of his grandmother's passing only hours before he took the mound.

There were fireworks in Boston last night surrounding Alex Rodriguez. Ryan Dempster threw at him multiple times in his fist at bat, Joe Girardi was ejected, and A-Rod got revenge later by belting a home run that sparked a rally.

<li><a href="http://www.purplerow.com/2013/8/16/4627780/rockies-prospects-jonathan-gray-eddie-butler-hamlet-marte-christian-friedrich?utm_source=purplerow&utm_medium=nextclicks&utm_campaign=blogs">Rockies Prospects: Regarding pitching depth, grass is green but not ready to cut</a></li>