Denver has over a century of baseball history hidden all around us. Here's a brief tour of the city's old ballparks.

Share All sharing options for: Baseball before Coors Field: A tour of Denver's historic baseball sites

On Saturday I decided to scratch a long-time itch. Denver has a history of baseball stretching back to 1862, but this history often seems overlooked, even unknown. I wanted to visit the sites of the old ballparks where this history happened, if only to put an actual image to the drawings and photographs I've seen of these old places. The internet, and an excellent new book titled Baseball in Denver, provide the locations of these parks. They're surprisingly convenient to visit - the entire trip took less than two hours.

I went in order of each park's construction and snapped a few pictures of the sites as they currently stand. Copyright restrictions prevent posting drawings or pictures of the parks as they were, but I've included links below.

Location: between Lincoln and Broadway, Colfax and 16th Street

What It Was: Broadway Grounds hosted the first recorded baseball game in Denver in April 1862. Less than three weeks after the Battle of Shiloh, and a day after David Farragut captured New Orleans for the Union, McNeils Side defeated Hulls Side 20-7 in a baseball game held at Broadway Grounds. Broadway Grounds was a multipurpose facility, and later was home in the Denver Brown Stockings in the 1870s.

What It Is Now: Civic Center Station, where the Mall Ride ends on the east side of downtown, and United Nations Park: 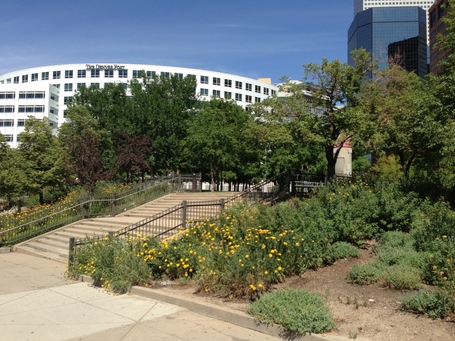 Location: between 32nd and 33rd Streets, Walnut and Larimer Streets

What It Was: Larimer Street Base Ball Park was home to Denver's first professional team that competed in a multistate league. The Denver team, known as the Mountain Lions or Mountaineers or even the Denvers, played their home games at Larimer Street in a Colorado-only league in 1885. The next year, in 1886, the club joined the Western League, and promptly won the pennant.

What It Is Now: Partially a hardware wholesale store, and partially a vacant lot: 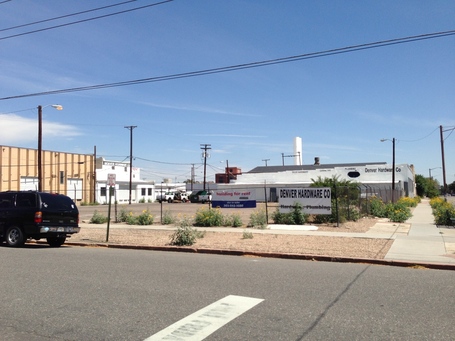 Location: between Bassett Street and the Platte River, 16th and 20th Streets

What It Was: River Front Park was home to organized baseball from 1887 to the turn of the century (as was an earlier version of Broadway Park, discussed below). In addition to Denver's team (which bounced between Colorado leagues and multistate leagues after winning the 1886 pennant), River Front Park hosted barnstorming major league clubs like the Phillies and White Stockings (now Cubs), as well as one of the Spaulding Tour teams in 1888.

What It Is Now: Part of Commons Park: 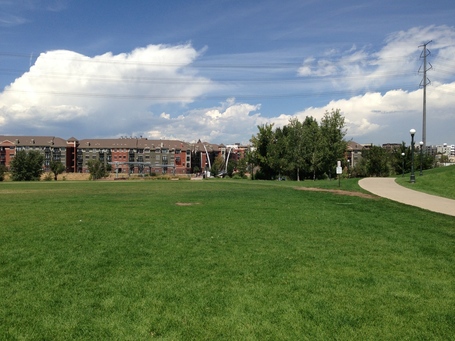 What It Was: George Tebeau, who played on Denver's 1886 championship team, led the charge to build a new baseball field in the city. That park would be Broadway Park, built on the south side of Cherry Creek (and built over an earlier version of the park that quickly burned down in 1899). Broadway Park was home to the Denver Grizzlies (later Bears) of the Western League until 1917. It also hosted barnstorming teams, local semipro teams, as well as the Denver White Elephants, the city's independent African-American team organized by A.H.W. Ross.

What It Is Now: A parking annex for Denver Health: 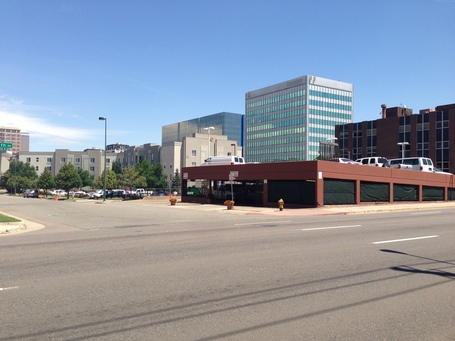 What It Was: The Bears returned to professional baseball in 1922, and played in a new park on south Broadway. Merchants Park was an improved facility, ample enough to host barnstormers like Babe Ruth and Lou Gehrig, as well as the Denver White Elephants. The park also was home to the prestigious Denver Post Tournament, held each year between non-major league teams. The tournament is notable because it was both integrated and international in scope. A Negro League all star team won the tournament in 1936 behind the play of Josh Gibson, Satchel Paige, Buck Leonard, and Cool Papa Bell. The next year, an all star team from Mexico won the tournament. The Bears played their final game in Merchants Park in July 1948, and it was quickly razed.

What It Is Now: A shopping center: 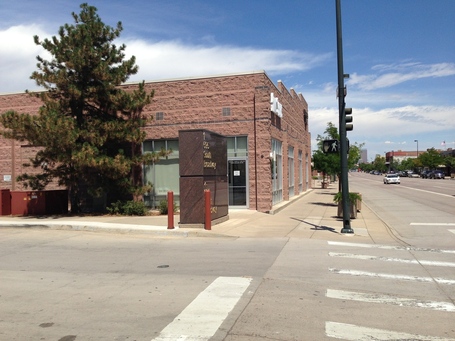 Location: northwest of Sports Authority Field, between Federal Blvd. and I-25

A picture of Bears Stadium in the distance Available Here.

What It Was: The most famous of the old Denver ballparks, Bears Stadium opened in August 1948 with approximately 18,000 seats in the grandstand. Bob Howsam, who built the park for the Bears franchise that he ran, later was a key player in attempting to form a third major league, the Continental League. While the attempt was unsuccessful, it did succeed in putting Denver on the map as a future home of a major league baseball club, and also led to the expansion of Bears Stadium in the late 1950s. When the city acquired the park in 1968, it was renamed Mile High Stadium, but it remained the home of the Bears (renamed the Zephyrs in 1985) until 1992. The Zephyrs left for New Orleans after 1992 to make room for Colorado's new National League ballclub. The Rockies played in the park their first two seasons, leaving for Coors Field in 1995.

What It Is Now: Parking Lot J at Sports Authority Field.

Except for Bears Stadium, none of the sites I visited has any marker or memorial to the baseball played on the grounds. In 2006, the Rockies and SABR's Rocky Mountain Chapter dedicated a memorial to Bears Stadium in the form of a plaque standing on the northwest side of Sports Authority Field: 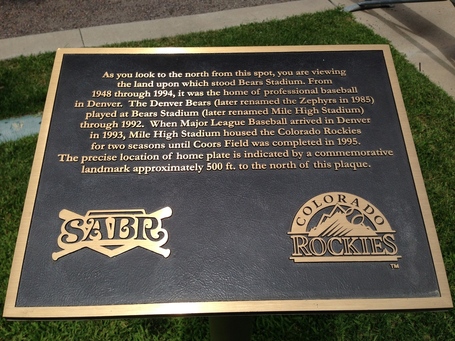 As the plaque indicates, there's a painted marker in Lot J at the actual location of home plate in Bears Stadium / Mile High: 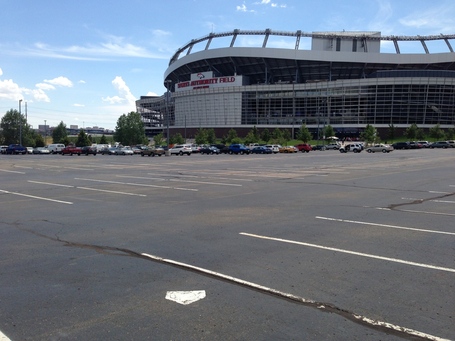 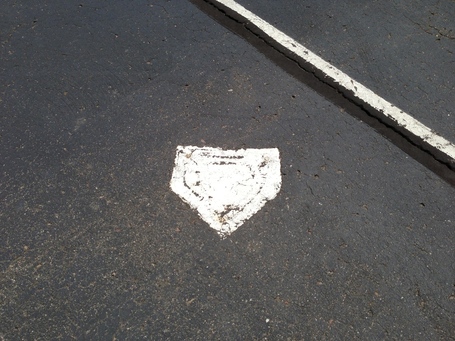 This was a sobering, maybe somber end to the trip. To visit the other sites was a fun but largely sterile experience. But to see a home plate, even a painted one, in a parking lot hit me hard. How many cleats touched the plate that was there? How many bats tapped it? How many umpires' brooms brushed it? How many plays were made at that plate? How much joy did those plays cause? How much anguish? The answers are under asphalt. 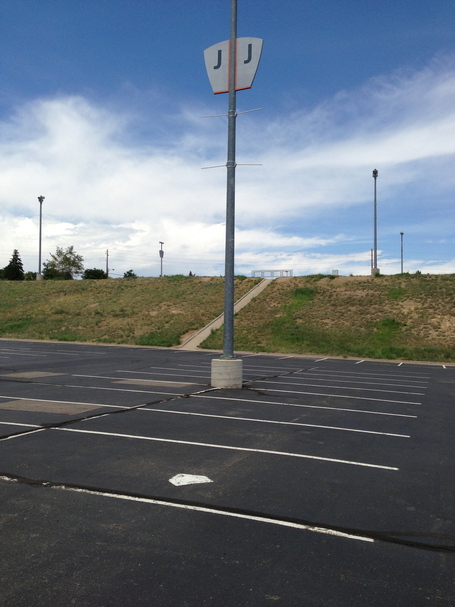 It was a downer to end my Saturday morning tour that way so, instead, I finished by driving back downtown, a little to the south of the old ballpark where Denver won a pennant back in 1886, to see a different place. This place, alive and thriving, is to me the best marker of 160 years of Denver baseball history. If Bears Stadium reminds us that glory fades, and that nothing lasts forever, the ballpark on the corner of 20th and Blake Streets reminds us that tomorrow can take care of itself, and that we can appreciate the beauty of the game in its present moment. 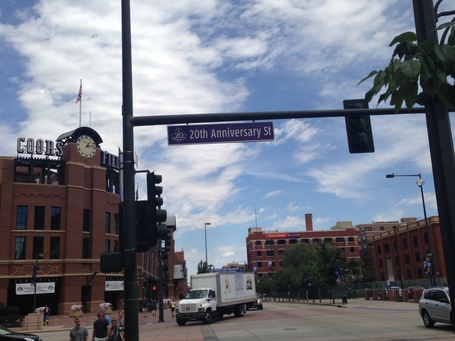 If you're interested in more pictures and descriptions of these early ballparks, check out Matthew Repplinger's book, Baseball in Denver, linked above. Repplinger is the president of SABR's Rocky Mountain Chapter, and his book has plenty of interesting photos and stories from Denver's baseball past.