...An no, I'm not just talking about the Rockies record in September here.

Share All sharing options for: Monday Rockpile: A failure to finish strong

On Saturday, Kevin posted a very interesting piece that touched on the strengths and weaknesses of this Rockies team.  In the first few lines, he writes this...

After the recent trend in late-inning losses, I sat down to find statistics to prove that the bullpen has been the undoing of the Rockies' team this year. Moving through page after page on fangraphs.com, I quickly realized that my assumption was incorrect and that the bullpen has held up their end of the bargain for much of the season.

I found this analysis interesting because like Kevin, I too feel like the Rockies have lost a disproportionately large number of games in the late innings.  The Rock Mining piece goes on to discuss where the Rockies rank at each position and how that plays into the strengths and weaknesses of the team as a whole, but I'd like to add on to Kevin's initial thought by taking things in another direction.

First off, I wanted to see just how many games the Rockies are losing late compared to the rest of the National League. So what I've done here is take each team's position at different points in the game and expressed it in the number of games above or below .500 the club would be if the game ended at that moment.

Here's how it works: If a team has played 100 games and after five innings is leading 40 times, trailing 50, and tied ten, then they get a "-10" in their box under the 5th inning, indicating that the team would be ten games under .500 if all their games ended right there (We just throw out the ties and give everyone a .500 mark for that since we don't know what would have happened in those games).  It doesn't give us the "why are teams losing games", but it gives us the "when are teams losing games" about as well as any method I've seen.

(Note: I've ordered the table by the records after the third inning simply because I find it fascinating that the Cubs have been the best team in the NL for the first third of the game.) 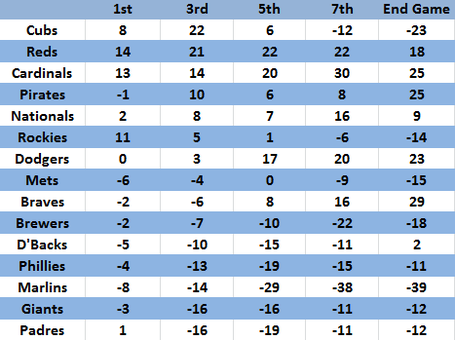 The Colorado numbers here confirm what we expected; the Rockies get worse as the game goes on. It's not as bad as the Cubs situation, but they go from one of the best teams in the league in the early innings, to one of the worst when it actually pays to be ahead.  Why?

As Kevin mentioned in his piece, it's not because the Rockies have a bad bullpen (although I would disagree with him slightly on how strong the bullpen has actually been).  The relief arms have been both a strength and a weakness at different times this season as situations have dictated certain fluctuations, and the recent struggles smell like group that's out of gas because they were worked so hard early in the season.

But that's a different topic, one that will certainly be worth a post or two in the off season. What I'm more interested in here is how the offense has performed at different points in the game, and it doesn't take much digging to see that the Rockies offense gets worse as the game goes on and is therefore largely responsible for the severe drop off we see in the record from the late innings in the chart above.

At the end of the six innings in 2013, the Rockies have led 64 times, trailed 63 times, and have been tied 23 times. In the 64 games they have led, they are 54-10. Those ten losses when leading after six innings are more than I'd like it to be, but it's also not utterly horrendous when you consider where the Rockies play.  Leads can evaporate very quickly in the late innings at Coors.

The more telling number to me though is the Rockies record in the games they have trailed after six innings. In those 63 contests, Colorado is just 3-60. In other words, when the Rockies fall behind going into the late innings, they just don't come back very often. If they face the teeth of the opponent's bullpen, they tend to go quietly into the night instead of putting up a real battle as indicated by their .631 OPS in "Late & Close" situations which ranks them 28th in baseball. (And somehow, that's even worse than it sounds because these numbers are not park adjusted. The Rockies are worse than just about everybody in the league in these situations despite the advantage of hitting at Coors Field)

Now let's stick a microscope on those last three innings.  In the table below, I've listed the OPS of every Rockies player for innings 7-9 this season as long as they've had at least 50 plate appearances in that situation. 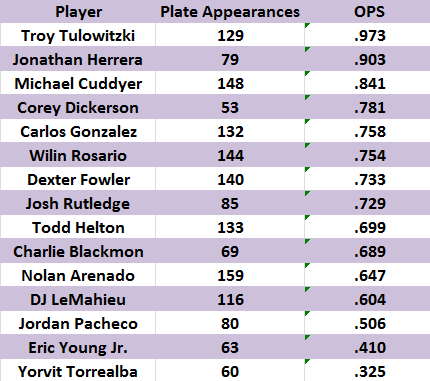 Now I'm not going to post a chart with the Rockies numbers against relievers because most of it is going to look just like the one above, but one thing that was interesting is that some of the young players saw their numbers drop even more.  Josh Rutledge has just a .696 OPS when facing a reliever the first time in a game, DJ LeMahieu's number is .562, and Nolan Arenado's OPS drops off to s stunning low .465 in that spot.

This could just be a reflection of inexperience. Our young guys should get better with time as they see some of these guys over and over again. However, it may also reflect poorly on the Rockies coaching staff  / ability to make adjustments within the game.  Some teams are very good at seeing what a lineup is or is not doing, and they can attack weaknesses swiftly and decisively.  Judging by these numbers, it doesn't appear as if the Rockies are one of them.

Then again, much of this could also be circumstantial. It's very difficult to tell if you're not in that clubhouse everyday, and even if I was, it would still be tough to conclude anything.  In any case, these numbers are interesting, and if  they can be adjusted in the right direction, it should be make for at the very least, a more exciting 2014.

Carlos Gonzalez likely needs surgery on his right middle finger that's been giving him problems for much of the season.  Rest doesn't seem to be working in this case, and although surgery is generally a last option, Cargo is reaching a point where it's probably his best one.

Troy Renck has more on Todd Helton's decision to retire, and says that the 40 year old Colorado icon is at peace with his decision.

Speaking of Todd, Nick Groke has a timeline of Helton's career with the Rockies.

Jon Gray did a quick "Q&A" with Fangraphs where he discusses among other things why he didn't sign with the Yankees.

Ben Horrow takes a look at what the Dodgers may do in this coming off season.

Grant has this weekend's update on the playoff races as things are getting truly crazy in the battle for the American League Wild Cards.