The Colorado Rockies were once known for their strong and memorable Septembers, but lately, this has been a month to forget.

Not all that long ago, the Rockies were known for their strong finishes. In fact, it was something many fans wore as a badge. As long as Colorado stayed somewhat close into September, there was a feeling that the Rockies might make a run at the postseason. This wasn't just because of 2007 either, there were several seasons where the Rockies fought to the finish and looked like a rising stock going into the off season. It's part of what made them fun to cheer for.

I bring this up because we've seen a dramatic reversal of that trend over the last two and a half Septembers. For an illustration, take a look at the table below which has the Rockies record for the last eight Septembers. 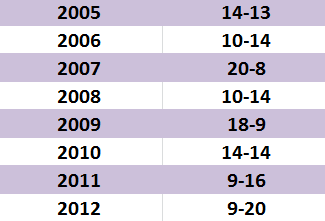 For the better part of five years, the Rockies ended their season giving fans reason to feel better about the team than they did in the middle of the season. The streak began in 2005 with that 14-13 September. It may not sound all that impressive, but it was part of a larger 30-28 finish to the season of a team that lost 95 games. It was the first time that the Rockies showed signs of emerging from the dark ages that gripped the team in the early part of the decade.

2006 was decent but nothing great. The big thing here was that the team didn't fall flat on its face after dropping out of playoff contention following the all star break. The still finished strong enough to make you believe they were headed in the right direction, and as it turned out, they were.

September of 2008 was actually a disappointing month, but that team felt much more like a club that was out of gas than a club that was sleepwalking to the finish. They also were coming off a 17-10 July and 15-13 August as part of a 42-37 finish to the season - Which for a 74 win team, gives you hope going into the following season.

2010 is where the switch occurs. For a while, it looked like the Rockies were once again going to prove to be kings of September. Powered by a stretch in which Troy Tulowitzki hit 14 home runs in 15 games, the Rockies jumped out to a 13-4 start to that September and pulled to within a game of the division lead.

Then came the most disappointing regular season game in franchise history. The Rockies were in Los Angeles trying to complete a sweep of the Dodgers who at the time were crashing like the stock market in 1929 (5-15 in their last 20 games to fall 11.5 games off the division lead). The Rockies chased Clayton Kershaw from the game, took a 6-1 lead, and seemed to have one hand on the broom. From there, pretty much every purple player on the field started making little mistakes that allowed the Dodgers to get back in the game and win it in 11 innings. (You can read more about it here if you're a glutton for punishment.)

Not only was that loss brutal to take when it happened, but it marks a perfect turning point in the reversal of the Rockies September fortunes. They would go on the finish that season on a 1-13 plunge (1-10 in September) and would follow it up with two more embarrassing closing months in 2011 and 2012. Or to put it another way, the Rockies were 85-62 in September from the start of 2005 to the start of that Dodger games in 2010, and are 19-46 since.

2013 provides a nice opportunity to gain some traction back here. The pitching staff is not in ruins like it has been in some recent years and the Rockies are starting to get more consistent contributions from guys like Rosario, Arenado, and Dickerson who they are going to need in the future. If used correctly, September of 2013 will be used as a stepping stone into the 2014 season.

(Also, the Rockies are facing the Dodgers and Clayton Kershaw today so it would be kind of poetic if they could get back on track in the same scenario that derailed them from their September dominance three years ago.)

The Rockies don't have to light the world on fire this month, but finishing over .500 would be a good start to regaining a quality to once made this team so enjoyable to watch.

Patrick Saunders has more on Todd Helton and his 2500th career hit yesterday.

Unfortunately, yesterday's win wasn't all good news. Tyler Chatwood had to leave the game with an injury after attempting to bare hand a line drive back up the middle. X-rays were negative but Chatwood has a bruised thumb and it's unknown when he'll make his next start.

Troy Renck puts the Rockies 2013 season into context and looks at their needs this off season.

Keep up with everything Purple Row