Past & Present: The Toddfather's send-off

Stories from a game that really wasn't about the final score.

Share All sharing options for: Past & Present: The Toddfather's send-off

Having been to hundreds of Rockies games in my life, and as one of the 48,775 fans at Coors Field last night, the only thing I can compare the atmosphere to is a playoff game.

Only it was a playoff game where the result on the field didn't matter all that much, it was a night to celebrate Todd Helton's career with the Rockies. There were a whole lot of Helton shirts and jerseys in the crowd and the line for the Helton Burger Shack was very, very long.

In a pregame ceremony, Todd's daughter Tierney threw out the ceremonial first pitch, a perfect strike to her dad. (After watching the game, maybe Tierney should have pitched the eighth inning.) The Rockies also gave Helton a horse as a retirement gift. Not just any horse, but A Tru Bustamove, a three-time world champion to go with Helton's three Gold Gloves. It's a good thing in this case that Helton doesn't have as many Gold Gloves as he deserves, because the Rockies would have had to find a ten-time world champion horse or something. 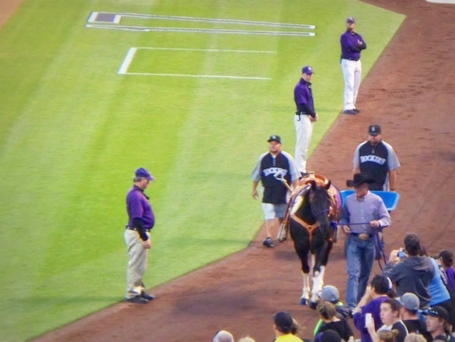 As the Rockies took the field, Helton's teammates pulled a fast one on him, stopping at the top step of the dugout to allow Helton to take the field himself to a standing ovation. When the game got going, Jhoulys Chacin and the Boston offense went off-script, with Boston scoring three in the top of the first.

Things got back on track in the bottom of the second, when Helton got the Rockies on the board, taking the 1-1 pitch from Jake Peavy into the right field stands for the 369th home run of his career. It was one of the loudest roars I've ever heard at Coors Field, and Helton even came out for a rare curtain call.

Helton wasn't done either, driving in a run with a sacrifice fly in the third to cut Boston's lead to 4-3. By the time Helton came to the plate for a third time in the bottom of the fifth, the Rockies were down, 10-4, but Helton wasn't done, he did what Todd Helton does, doubling for the 592nd time in his career, driving in Michael Cuddyer. However, he was stranded at third. 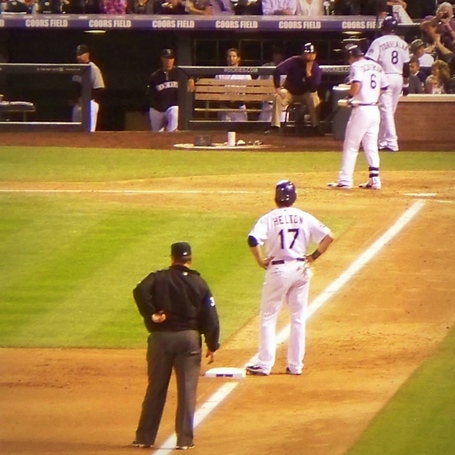 Throughout the game, the Rockies showed highlights from Helton's career as well as tributes from everyone from Michael Cuddyer to Dante Bichette to Peyton Manning, who thanked both Todd and the Rockies training staff for helping him rehab his neck during the NFL lockout. There were even appearances from Matt Holliday and Clint Hurdle.

Helton's last at bat, in the seventh, did not go as planned as he struck out against former teammate Franklin Morales, but a 2-for-3 night with 3 RBIs, a home run and a double is nothing to sneeze at.

There was another great moment in the top of the ninth, as Helton's daughters came onto the field and took first base home with them, their dad's to keep. After the game, a 15-5 loss, the Rockies took their annual lap around the field, with Helton leading the way high-fiving fans all around Coors Field. He then stood at home plate, tipped his cap to the fans, and greeted both teams before walking off of Coors Field for the last time. 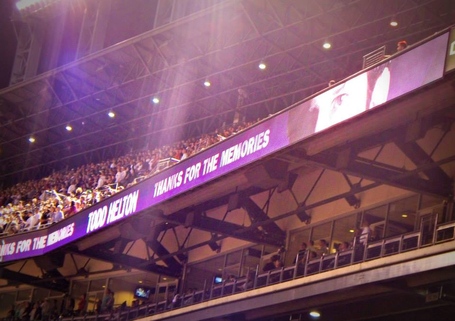 The Rockies may not have won the game last night, but they gave the best player in franchise history a proper, classy farewell, and I suppose it was somewhat appropriate considering his career that Helton's stellar performance at the plate was undone by his team's complete inability to pitch.

Thanks for the memories, Todd, it will be a long time before we see another one like you.