The 2014 ZiPS projections are out for the Rockies, and they do not have nice things to say about our returning players.

This is going to be a brief Rockpile as the last the few days have been hectic here, but I will explore the following topic regarding the 2014 ZiPS projections for the Rockies which came out yesterday.

If you read my Rockpile at the beginning of last week, you'll probably remember the table from the end of the piece showing the 22 players returning to the Rockies from last season along with their baseball reference Wins Above Replacement (rWAR) number from last season. In total, the 22 players on last year's team expected to return to the Rockies in 2014 posted 38.1 rWAR.

When asked in a poll if if this group of players could repeat their success during the upcoming season, 69% of the Purple Row community said yes. If they are correct, it would put the Rockies very close to a playoff spot for reasons discussed elsewhere in that article.

However, Dan Szymborski's ZiPS projections were released at FanGraphs yesterday and they project a significant regression from the 22 returning Rockies in 2014. We're talking crashing and burning to the tune of -9.5 WAR when compared to 2013. Here's the gory details. 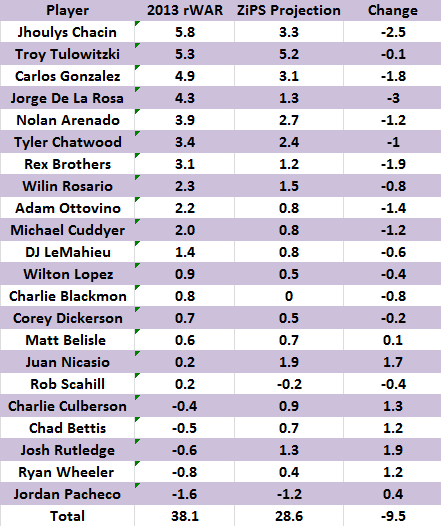 You have to get all the way down to Matt Belisle who posted an rWAR of just 0.6 last season before you find a player ZiPS thinks is actually going to improve in 2014.

There's some other interesting nuggets in there too that I'll leave for the commenters to pick at. For instance, the expected improvements from Josh Rutledge, Charlie Culberson, Ryan Wheeler, and Chad Bettis, the fact that ZiPS projects only four hitters on the entire team to post an OPS+ over 100, and the puzzling offense output ZiPS expects from Wilin Rosario and Matt McBride (The system essentially thinks they are the exact same hitter.)

After this, news is mostly quiet on the off season front, but I would expect to start hearing about arbitration cases from Drew Stubbs, Wilton Lopez, and Franklin Morales very soon.

Jordan Pacheco is looking forward to a fresh start with the Rockies behind home plate.

Jonathan Gray was named the #4 right handed pitching prospect in all of baseball according to MLB.com. Unfortunately, Archie Bradley of the D'Backs leads the way here.