Share All sharing options for: Friday Rockpile: The key to 2014

The Rockies have made a lot of moves this off season. Between retooling the outfield (so long Dexter Fowler, hello Drew Stubbs and Brandon Barnes), adding a veteran first baseman (howdy Justin Morneau), and bringing in more pitching (what's up Brett Anderson, Jordan Lyles, Boone Logan, LaTroy Hawkins, and Franklin Morales), there's going to be a lot of new faces wearing Rockies purple come Opening Day. But in all likelihood it won't be one of those guys who catapults the Rockies from worst to first in the NL West.

I think it'll be this guy: 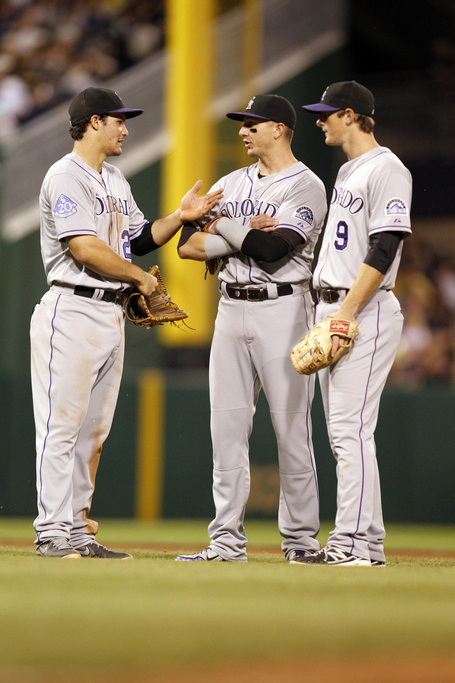 No, I'm talking about Nolan Arenado, not Troy Tulowitzki, even though Tulo would be the conventional answer as the key to a successful Rockies season. But convention is boring. We all know we're boned if Tulo's annual injury is worse than usual. I mean, his replacement is Paul Janish. But in terms of getting potential star level production from a position we don't usually get it, Arenado is the Rockies' best bet.

This article by Thomas Harding is a good snapshot of what Arenado thinks of 2013 and what he wants to achieve in 2014. This quote in particular jumped out at me:

We all know about Nolan's defense. He won a Gold Glove for his defense at third base, a rare feat for a rookie. While Gold Gloves can occasionally be awarded to undeserving players, that's certainly not the case with Arenado. Fangraphs' defensive metric, UZR/150, rated his glove work at 22.5 runs above average for a third baseman, making him the 8th best defender in all of baseball. Baseball Reference was even more impressed, estimating he saved 30 runs in 2013. That's just out of control.

Defense alone made Nolan an above average player (2.7 fWAR, 3.9 rWAR). But what if he becomes the offensive force at the plate that the above quote indicates he aspires to be?

Arenado hit .267/.301/.405 with 10 home runs in 2013. He held his own at the big league level, but when you call Coors Field home, that line leaves room for improvement. Per wRC+, which measures total offense where 100 is average, Nolan rated a 79. For a prospect who was lauded for his hitting, not his defense, Arenado's 2013 was some sort of bizarro world opposite of what most observers expected. It was like seeing Kanye West take the microphone and hearing him croon a perfect version of Bridge Over Troubled Water; not bad, just unexpected.

If Arenado's hitting does take a step forward, though, he might jump up to the level of Tulo and Carlos Gonzalez. If he manages even an average batting line next year, coupled with the same defense, he'd be a 4-5 WAR player. If he became an above average hitter, which is eminently possible given his pedigree, body type, and contact ability...well, then we're talking about an All Star. And remember, he's only 23 in April.

Of course, one should expect some regression in his defensive numbers; they fluctuate just as much as offensive numbers, and outlier performances tend to regress back toward the mean. But if he takes that step forward on offense, combined with his elite skills at third base, the Rockies might have a third dual threat in their everyday lineup, to go with Tulo and Cargo. And that might be the key to a playoff bound Rockies team in 2014.

It would also be nice if the pitching was good.

Not much else out there Rockies related. I believe there is a football game approaching though.