The Colorado Rockies have made several moves this off season, but their success next season still largely hinges on how much production they can get out of their returning core.

The 2012 Colorado Rockies went 64-98. The 2013 Rockies won ten more games, but still finished in the cellar at 74-88. I want to focus on that ten game improvement for a moment, because essentially all of it came the same players within the organization not being injured, or more accurately in this case, not being injured as much as they were in 2012.

Despite Nolan Arenado's brilliance defensively and his 3.9 wins above replacement according to baseball reference (rWAR), there's enough negative production in that group for the 2013 new comers to only total 0.5 rWAR. Essentially nothing!

There's lots of bad memories on that list, but their 2012 rWAR total as a group is only slightly negative, coming in at -0.8. This means that when you add up the rWAR from the players who left following 2012 and the new players who came in for 2013, you only get 1.3 rWAR.

It's a completely different story however when you look at the 27 player who appeared on both the 2012 and 2013 rosters. They compiled just 23.0 rWAR as a group in the 98 loss 2012 season, and 32.5 rWAR as a group in 2013. In other words, despite these players not changing, they were able to add 9.5 rWAR to the roster just but playing better and staying on the field more often (mostly staying on the field more often). 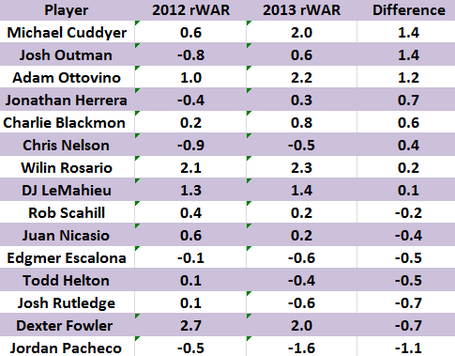 Add up the 9.5 rWAR gained here and the 1.3 rWAR gained by the changes made to the 2013 roster we discussed above, and you get an improvement of 10.8 rWAR, which is a pretty darn close estimate to the ten wins the Rockies actually did improve last season.

In 2013, this group of 21 players totaled -4.9 rWAR. Even with the positive contributions of Dexter Fowler, a strong argument can be made that the Rockies are automatically five games better simply by dropping this dead weight.

On the other side of this coin, here's the players added to the 2014 Rockies via signing / trade and the players who are very likely to come up from the minors at some point this season we know of right now. They are Brett Anderson, Christian Friedrich, Jordan Lyles, LaTroy Hawkins, Boone Logan, Franklin Morales, Just Morneau, Brandon Barnes, Drew Stubbs, and Kyle Parker. Circumstance will obviously dictate others coming in as well, but as of right now, this is a pretty good list of players the Rockies will be relying in for external improvement this season.

It's impossible to accurately nail down, but when I look at this group of players, I see a very good chance for the Rockies to pick up an additional four or five rWAR they didn't have last season, and when you add that to the toxic -4.9 rWAR they are dumping from last season, all of a sudden you have a team that should win close to 85 games next season.....right?

Well not so fast. There's a reason why I led off this piece looking at how the Rockies gained ten wins last season, and that's to show how volatile bringing back the same group of players can be even if we're talking about everyone getting just one year older.

Going back to the tables above that measure the swings in 2012 to 2013 production from the players on both teams, two things stick out to me right away. One is that as much improvement as the Rockies received from those top six swing guys (and really top seven swing guys if we include Michael Cuddyer here), it actually could have been even larger. Amazingly, six of the top seven guys on the list of players who saw the largest jump in production last season missed time due to injury. Troy Tulowitzki, Carlos Gonzalez, Jhoulys Chacin, Tyler Chatwood, and Michael Cuddyer all spent time on the DL, and Jorge De La Rosa was shut down for most of September. None had injuries that wrecked their season, but all six of these players could have posted an even larger improvement if they were healthier.

The other thing that jumps out to me is that the list of players who came back in 2013 and saw the largest decline in production is filled exclusively with players who posted an rWAR between 1.4 and 2.6 in 2012. This might be a total coincidence, but it's interesting in terms of looking for players at risk of dropping way off in 2013.

Of those between 1.0 and 3.0 rWAR we discussed above, I'd be most worried about a big drop off in production from Cuddyer for two reasons. One is because of his age, and two is because all of his production comes from the bat. Cuddyer doesn't play a premium position, he's below average defensively, and while he's a smart base runner, he certainly doesn't have enough speed to post any sort of significant value here. So if Cuddyer sees a drop off at the plate this season, he's in big trouble in terms of his rWAR score.

Once you go up the latter above that, it's all about staying healthy. I could see drop offs in production from Chacin, De La Rosa, and Brothers, but if they stay on the field they should still post strong scores.

Tyler Chatwood should see a drop off in production as well, but since he only pitched 111 innings last season, he can soak that up with more playing time. Nolan Arenado is also likely to see some regression from his otherworldly glove work in 2013, but any step forward he takes with his bat should be able to cover a large chunk of it as he's still a very strong defensive player.

As far as Tulo and Cargo are concerned, they could actually post even higher rWAR scores if they stay on the field, especially Tulo. I still believe he has an 8.0 WAR season in him somewhere.

Looking at that list of the 22 players coming back from 2013, they compiled 38.1 rWAR as a group. That's a significant bump from the 23.0 rWAR the Rockies had returning from their 2012 team. In order to hang on to that 38.1 rWAR however, Colorado needs good health from those top ten guys.

It sounds like lazy analysis, because it's true with every team, but it's especially true with this core that's seen big problems with injuries in the past. If the Rockies can somehow get at least 38.1 rWAR from these 22 players again in 2014, I think they're going to be playing meaningful baseball in September. They're probably going to need to break the 40.0 mark to have another Rocktober, but retaining what they have here would actually be a very good starting point.

I encourage you guys to continue the discussion in the comments here. We've talked quite a bit about the change in production this off season expected from the departures of old Rockies and the entrance of new ones, but probably not enough about what we can expect from our returning purple pinstripers.