We won't see too many big-name position players in the Rockies' intrasquad tune-up on Thursday, but there are some intriguing guys slated to play nonetheless.

Tyler Chatwood and Eddie Butler are the scheduled starting pitchers while Corey Dickerson and Charlie Blackmon are penned into the leadoff spots for their respective sides for the first of perhaps many times in 2014. Here are the full lineups, as well as bullpen (including Jon Gray!) and bench options, courtesy of the Rockies' official Twitter account: 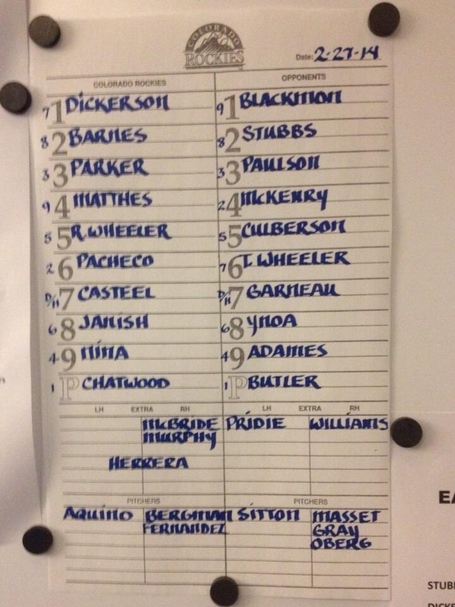 There likely aren't going to be a ton of battles for roster spots in spring training, but the options for the positions that aren't quite settled will be well-represented in this game.

We'll probably set up a GameThread just for the heck of it, even though I don't think the game is being broadcast in any manner other than perhaps live-tweeting from the Rockies' trio of beat reporters. I figure we can all use the opportunity to knock the rust off. After all, as they say, it's spring training for everyone.