Bettis has a chance to be a dominant middle reliever as soon as this season ... if the Rockies let him.

Chad Bettis' first go-around in the big leagues didn't go so well, but now a full season separated from shoulder surgery, he looks the strongest he has been in a couple of years and is firmly in the mix for a job in the Rockies' bullpen.

And if they put him there, he is going to succeed.

Bettis predictably underwent a role change after the season, switching from starting pitcher to hard-throwing reliever. Though he still has starter upside, the very thing that kept him from reaching that -- developing a changeup -- is what could make him a huge weapon out of the bullpen in 2014. The 24-year-old right-hander has vastly improved the pitch, writes Troy Renck of the Denver Post, and it's making Bettis give Walt Weiss and the Rockies' brass a lot to think about as the season approaches, and with it, the finalization of the big-league roster.

If Bettis, reformed changeup holds up, it'll give him a legitimate third pitch to go with an at-times overpowering fastball and plus slider. Bettis insists the pitch is more of a splitter, but either way, it has been keeping hitters off-balance all spring. The Texas Tech alum has made the most out of limited work in Cactus League play, fanning six batters and walking only one in six shutout innings. A big reason for that, in addition to the new pitch, is that his fastball velocity is up, according to reports.

That's not necessarily a surprise in looking at his charts (courtesy of Fangraphs) from 2013, comparing Bettis the starter to Bettis the reliever: 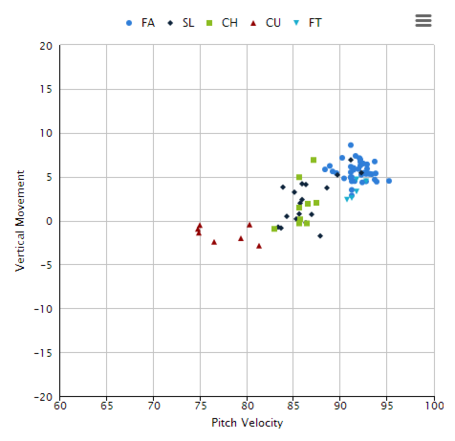 Bettis was mostly 91-93 mph with his fastball in this start (and roughly 92.3 mph on average, according to Brooks Baseball, throughout the month of August). His other starts mirror this chart -- he's mostly in the lower end of that 90-95 mph and 5-10 vertical movement quadrant. 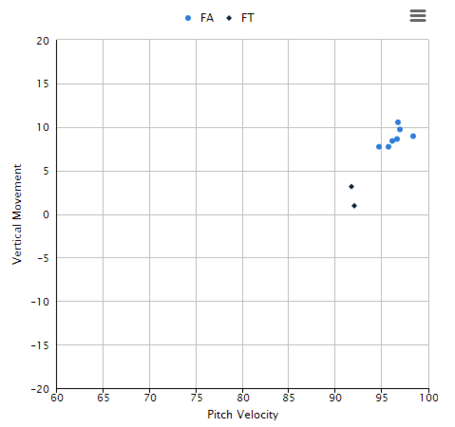 The flame-throwing right-hander was mostly on the other side of 95 mph in this relief outing, and his vertical movement appears to be consistently better. The majority of his later relief appearances mirror this one. And, in the month of September, Bettis' velocity was up more than two mph -- Brooks Baseball had him at roughly 94.4 mph during that time, per the previous link.

Oddly enough, Bettis' fastball and slider -- his two best offerings, according to scouts and analysts alike -- were his two worst pitches in terms of value in 2013. The fastball got better as time went on, but the velocity on the slider fell a little bit and it seemed as if Bettis could never really corral it. He did not have that issue in the minors, and he hasn't had it this spring. And that if that changeup -- which graded out as his best pitch in 2013 -- is truly better, it will only help the rest of his repertoire.

We've seen what kind of competitor Bettis is. We've seen the frustration at the big-league level. We've seen the bulldog mentality, as evidenced in the Cal League playoffs in 2011, when he dialed up his fastball a few notches to strike out a top prospect. And now we're seeing a guy who is dead-set on making improvements necessarily to land a spot on the Rockies' 25-man roster in any role they'll give him.

And, if Colorado allows it by giving him reps in the majors, we might see Bettis in a new light -- as a dominant middle reliever at the highest level.