Part 1 of a five-part series: Take me out to the ballgame(s).

The long, cold, winter is over.

Thawing snowbanks and melted ice, the crisp bite of Colorado winter winds, and the still silence of nights that last for days, disappear into a crescendo of gloves popping, bats cracking, the guttural chatter of the boys of summer, and the scorching, dry Arizona sun.

Baseball swirls in the air in such a thick and palpable stew of sounds and aromas that you are certain you could drink it all up and never be full.

And there I stood, in the middle of it all, drunk on baseball stew like a kid on a candy rush, head on a swivel, notebook in hand, trying desperately to glean everything I could from this experience.

In front of me, Tyler Anderson buckles knees with a devastating curveball while Trevor Story and Rosell Herrera make phenomenal defensive efforts behind him. To my back, Tyler Matzek employs his nasty arsenal of pitches that miss bats more often than they miss the strike zone in a supreme display of being effectively wild. Or perhaps on this day it was the other way around; wildly effective.

On a third adjacent field, many of the players I met in Grand Junction (and several others I did not) engage in an intrasquad scrimmage with a more laissez-faire tone but no less a focus on taking advantage of every opportunity to get better.

Swaths of baseball players and coaches are in view regardless of which direction you look.

Grand Junction Rockies Developmental Supervisor Tony Diaz tells me that they've got 160 minor league players in camp -- 160 guys breathing, eating, sleeping, and dreaming baseball 24/7, forming bonds with each other through trial and tribulation, standing both as teammates and competitors.

One hundred sixty guys -- with timetables as diverse as themselves -- all ultimately working toward the same 25 spots.

It is hard work in a hot sun, but at least the long, cold winter is over.

We left Grand Junction, Colorado around 9 a.m. for the first leg of our trip. With short stops in Moab and Monument Valley along the way, we settled into the magnificence of the Grand Canyon Village. The sun, bathing the canyon side in a palette rich with red, purple and brown, was setting in dancing pinks and oranges that reached across the sky like outstretched fingers pulling a cool blanket of night over the world.

Even with the excitement of the baseball to come lingering in my senses and under my fingernails, it was impossible not to forget it all for a moment as we stared into the awesomeness of the Colorado River's breathtaking creation. 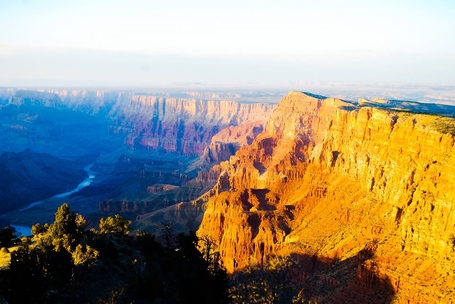 The Grand Canyon at sunset. Photo by Caitlin Rice.

My mother, my girlfriend Caitlin (thanks for the photos!) and I packed up the next morning, took a few more pictures and headed straight for Scottsdale, Arizona.

As the Saguaros' presence along the highway intensified, so my anticipation built until the very moment we arrived at Salt River Fields at Talking Stick; the Spring Training home for the Arizona Diamondbacks and your Colorado Rockies.

Take me out to the ballgames:

After settling in the night before with Joan and Greg -- some friends who live in the area and ought to be given congressional medals for their kindness and generosity -- we arrived at a collection of facilities for playing the child's game that begged a famous baseball related question: "Is this heaven?" 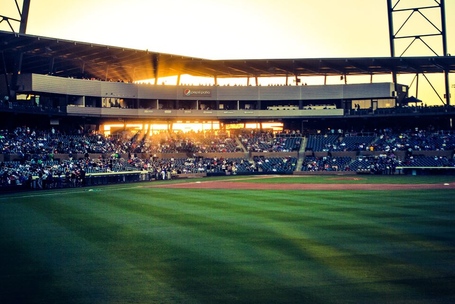 The major league game that night pit the Rockies against the Cubs, and when I first walked past the gates of Salt River Fields it was another six hours until the first pitch. I wandered for a bit along a long row of sectioned-off batting cages, full-sized fields flanking me in every direction.

A series of walkways separate what feels like an endless array of baseball fields in grids the way you think of little-league complexes but with the size, splendor, and immaculate maintenance required for true professionals. With its back to this beautiful maze lies the diamond among diamonds, where the big boys play.

Sprawling into the desert, a stadium that seats approximately 11,000 -- and has amenities and dining that rival Coors Field in some ways -- marinates in the unmistakable sounds and smells of summer's greatest pastime.

Salt River Fields as the Sun Goes Down. Photo by Caitlin Rice.

I followed a path to the field directly behind the main stadium's home plate and watched a group of players run through some base-running drills from just on the other side of the first-base fence. And as they began to spill out onto the sidewalk, I saw a familiar face.

A serendipitous symmetry occurred when pitcher Zach Jemiola strode my way and offered an enthusiastic greeting. He was the first professional baseball player I ever had a conversation with; he was the first pitcher I ever saw take the hill as a writer for Purple Row; and within just a few minutes he was the first player I saw at my first trip to Spring Training.

Thinking of others first is par for the course with Jemiola and he immediately asked me about our trip, how long I'd be around for, and how things were going here at Purple Row.

After a bit we got around to him being disappointed that I hadn't seen him pitch four stellar (my word, not his) innings the day before. So was I. He is getting more strikeouts than he was before and his control feels spot-on.

He maintained the glow that any person has when they love their work and are doing it well. He seemed almost as happy to see a familiar face as I was. We exchanged a few more niceties and he, as I would learn is the customary theme of camp, got back to work.

The last interaction I had with any ballplayer on my trip was also with Zach when I let him know that he was my first interview ever and that his graciousness went a long way toward making me feel like this was something I could do well. He responded nonchalantly but not-at-all dismissively with "Really? That's pretty cool. Not a problem, man. Any time."

Before I saw any on-field action, a number of other familiar Grand Junction alumni walked by me and offered a quick hello, a nod, or a wave. Helmis Rodriguez and Raimel Tapia, neither of who fluently speak my language, nor I theirs, offered wide smiles and an enthusiastic "Hello, how are you?" in contrast to my stumbling "Hola, ¿cómo estás?"

Carlos Estevez -- a big, hard throwing pitcher whose bright personality and charm transcends language -- sought me out after an excellent outing on the mound and said, "You will come back every year, yes?" I couldn't help but quip back, "You too, alright?" I'm pretty sure it's impossible to spend more than a few minutes around Estevez without bursting with hearty laughter and having copious amounts of fun.

I caught up with Correlle Prime (a first baseman who is inching closer to 6'8) and his mother Debra. "Primetime" spent the off-season honing his defensive skills. The improvement was evident.

And I caught up with Jordan Patterson who was his usual cordial self as he stopped to talk baseball, tell me that he had appreciated my writing on him and his teammates, and (as I've now grown used to) throwing a "How you doin'?" or a fist-bump my way every time our paths crossed.

Maybe Patterson is exactly as polite and kind-spirited as he seems or maybe he thinks I'm a good luck charm, because every time I see him play he hits the ball with consistent conviction. In a game of High-A players (a level jump for Patterson), he was right in the middle of the only scoring inning of the game with a base hit and a run scored.

Even his outs were loud, and for at least one minor league spring training game, Jordan Patterson stood shoulder to shoulder with any of them.

That night we attended our first MLB spring training game. The Rockies beat the Cubs on a thrilling walk-off home run from Charlie Blackmon. Earlier in the evening Carlos Gonzalez launched a three-run shot that landed no more than 20 feet from our position in deep right-center field.

Caitlin exclaimed, "I've never seen a baseball coming right at me that fast before." It was indeed one of the loudest sounds I'd ever heard come from a bat live, only dwarfed later by a mammoth boom from Javier Baez that resonated in the air for a moment like a jet engine shutting down.

My other two notes from the game concerned Justin Morneau and DJ LeMahieu.

Justin Morneau hit several hard line drive foul balls during two at-bats I watched. He made outs both times but I was impressed by his ability to hit the ball hard in every direction -- more importantly, wherever it was pitched. His approach was clear. He takes what the pitcher gives and attacks every part of the park. This should play exceptionally well at Coors Field.

A sequence from DJ LeMahieu on the bases reminded me why I love this game so much and how, no matter how fun it can be to ride, I can't fully jump aboard the statistics train yet. LeMahieu exemplifies optimizing intangibles like "baseball IQ" and "knowing how to win games."

When DJ stole second base easily, I remarked to the people around me that the pitcher hadn't been paying close attention. When DJ took third a pitch or two later I realized that he either really wasn't paying attention or that LeMahieu had simply noticed a pattern in his delivery that allowed him to maximize his jump.

After a long conference on the mound, the Cubs pitcher balked DJ in. I was reminded of a sequence in the film "42" when Jackie Robinson pulls off the same feat.

When a boy's young mother says, "But I don't understand, Jackie didn't do anything," her son responds, "Yes he did, Mamma! He discombobulated the man!"

DJ LeMahieu (a player without anything close to blazing speed , mind you) single-handedly scored a run in a baseball game with his legs and his mind by virtue of paying attention. I love this game.