Why the Rockies will win the pennant

As part of SB Nation's 2014 MLB Preview, we look at how the Rockies can win the pennant. Surprisingly, there are more reasons besides "because we would like that to happen."

Share All sharing options for: Why the Rockies will win the pennant

Injuries, depth, and pitching. These three things have killed the Rockies since their last winning season in 2010. Yet the entire front office remains intact despite the same issues repeating themselves. This offseason, the general manager duumvirate of Dan O'Dowd and Bill Geivett went to work to address these issues, and what emerged is a darkhorse postseason contender.

Don't let that last statement fool you. O'Dowd, Geivett, and the Colorado brass didn't exactly have a banner offseason. However, the Rockies are still a contender, albeit one that will go only as far as their injury-plagued superstar duo will allow, and lately, Troy Tulowitzki and Carlos Gonzalez haven't been able to stay on the field. As a club, the Rockies haven't either; the team hasn't played a meaningful post-July game in nearly four years.

Still, if the dynamic pair can stay healthy, the Rockies have a chance. Consider the first half of 2013, when the Rockies sat four games over .500 and were right in the thick of the NL West before Tulowitzki went down with a broken rib in mid-June. Gonzalez and Michael Cuddyer, in the midst of one of his best seasons, carried the team until shortly before the All-Star break, when the poor man's version of Tulo returned to the field and went 0-for-10 at the plate in his first three games back. Still, the Rockies sat within striking distance of the Dodgers and seemed to be picking up some steam until CarGo was nagged by a finger injury that ultimately limited him to five plate appearances after July. Colorado simply wasn't deep enough to counter another huge loss, and the team went 23-30 down the stretch.

It's difficult to compile quality depth that can soften the blow of losing guys like Tulowitzki and Gonzalez, particularly for a team with payroll constraints. O'Dowd and Geivett did not solve this problem during the offseason, but they did take some steps in the right direction. The acquisition of Drew Stubbs, who kills left-handers (.274/.349/.448 career) and would have been a great platoon partner with either Corey Dickerson or Charlie Blackmon in right field, would have made a lot more sense had the Rockies not jettisoned center fielder Dexter Fowler in a trade that brought back a poor return. 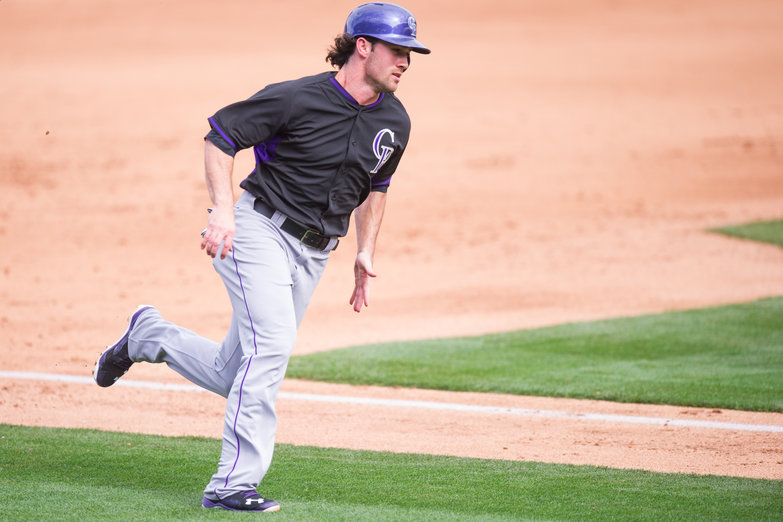 The moves mean Charlie Culberson (pictured) and Jordan Pacheco will begin the season on the 25-man roster.

The group still fits fairly well together, and if Stubbs can put the ball on the bat a little bit more and work toward overcoming his problems against right-handed pitching, he'll pose a much better insurance option for Gonzalez than anyone the Rockies have had over the last few years. As far as a contingency plan for Tulowitzki, there weren't a lot of options out there, and the Rockies don't have any help from the minors at that position for at least another year or two. The best option would be for Josh Rutledge to step up and hit like he did in the minors and his first month as a big-leaguer, but even then, he's a defensive liability at shortstop. As such, the Rockies brought in Paul Janish, a prototypical good-glove/no-bat shortstop. The team could do worse; having a glove that is at least comparable to Tulowitzki's behind a mostly pitch-to-contact staff should be a bit more beneficial than the Rutledges and Jonathan Herreras of recent seasons proved to be.

That brings us to the rotation. Jhoulys Chacin, Jorge De La Rosa and Tyler Chatwood each posted sub-3.50 ERAs in 2013 and all have the track record and/or youth to be able to sustain that success going forward. That gives the Rockies something they don't often have: promise in the starting rotation. That optimism is bolstered by the addition of Brett Anderson, who has been a well-above-average starter when not hampered by injuries. Colorado took a gamble when it acquired Anderson in exchange for former top prospect Drew Pomeranz, but if he can regain his health, the Rockies will have a rotation that has the ability to match up with any team in the division not named the Dodgers. Juan Nicasio isn't bad as fifth starters go, and the Rockies also have help on the way in top prospects Jon Gray and Eddie Butler, both of whom should be in Denver at some point this season. If the Rockies are in contention as late as they were last year, Gray and Butler could provide a huge boost.

The Rockies' bullpen has been the strength of the team during the recent lean years, and it appears that the unit will be even better in 2014. The front office recognized the toll being taken on the arms of the team's relievers, so ageless wonder LaTroy Hawkins was brought in on the cheap to help provide stability at the back-end of the bullpen, replacing Rafael Betancourt. Left-hander Boone Logan was given a $16.5 million, three-year deal during the offseason and will take on a greater role than he's had in previous seasons, when he made spot-relief appearances for the Yankees. Adam Ottavino, Matt Belisle and Wilton Lopez return from last year's squad, as does Rex Brothers, who likely share closing duties with Hawkins. Chad Bettis appears to be headed for a move from the rotation to the bullpen, where his plus fastball and slider combination will suit him well.

There was a lot of shuffling during the offseason, but ultimately the Rockies are in the same position they've been prior to each of the last several seasons. If the stars stay healthy and the rotation holds up, a postseason berth isn't out of reach, particularly if young position players such as Nolan Arenado and Wilin Rosario can improve upon their already promising early showings. And, you know what they say: anything can happen when you reach the postseason, and that's how the Rockies can win the pennant.

However, if the same issues continue to plague the team, the increasingly unhappy fanbase will continue to cause an uproar and this time, it might result in the overthrow of O'Dowd, who has overseen the Rockies since September of 1999.