In Part 2 of our five-part series, Drew visits the backfields at Salt River Fields at Talking Stick.

Minor league games at Salt River Fields take place in a setup that encapsulates the heart of the American pastime. It's so much like little league that I could feel childhood memories on my hot, dry skin that were momentarily indistinguishable from the reality before me.

Half-empty bleachers, scattered applause from only a few hands -- and the occasional scream of "heads up!" whenever a stray foul-ball threatened to find an adjacent field or group of fans watching another game in progress -- give the experience a unique flavor.

When not playing, players walk freely between the games, watching and cheering their teammates. Some sit on the bleachers with the fans, some stand behind home plate and a few are assigned the duties of keeping score and manning the radar gun.

The loudest thwacking of bats prompt head-turns and the occasional defensive gem elicit smatterings of the shouting of nicknames.

There are no announcers, no commercials, and no flashing lights or inanimate object races to distract you. Here in this place there are only ballplayers playing ball -- the soul of the game. 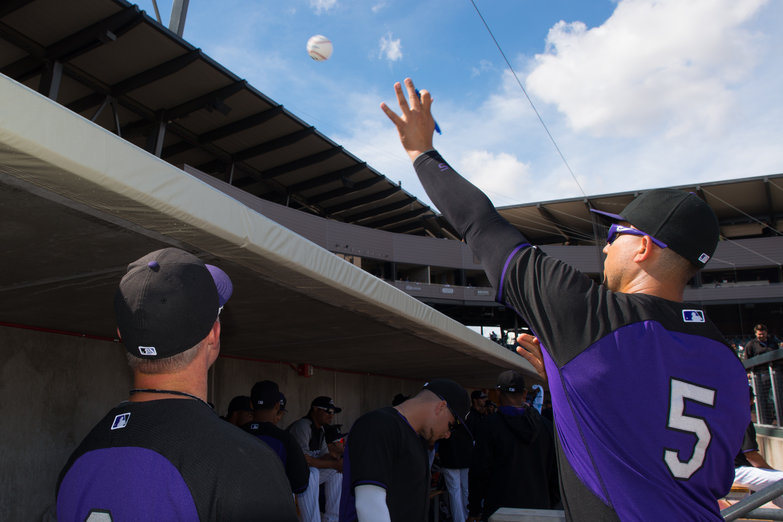 Part 1 of a five-part series: Take me out to the ballgame(s).

When I returned to Boulder, my roommate (as big a Cubs fan as I am a Rockies fan) asked, "What was the coolest thing you saw on the field?"

I thought for a moment back to CarGo's laser home run, Baez's answer, outstanding pitching performances from guys named Tyler, and an opposite field double from Ryan McMahon, who exclaimed with a trademark smile, "That would have been a triple in Coors Field."

But I tend to favor the rarest of events and I saw Rosell Herrera do something that I can't recall having ever seen before.

I didn't meet either of the Rockies' two most promising infield prospects in Arizona (position players were hard to catch up with) but I saw them each play in person for the first time and jotted down just a few notes.

Story manned the hot corner and Herrera was at short. In one inning, Story made an Arenado-like step-and-dive to snare a ferocious ground ball dashing just inside the third-base line. He hopped briskly to his feet and fired with astonishing strength ... but not accuracy. His offline throw pulled the first baseman off the bag and the runner was safe.

Story was not to be denied his silent web-gem, however. When the next batter hammered a chopper toward the hole between third and short, Story ranged to his other side stabbing at the baseball already by him, spinning, and firing a strike to second. The brilliant double play was finished off by second baseman Juan Ciriaco and Story had erased his error.

In the inning that followed, the bad guys had a runner at third with less than two outs and when a medium speed hopper bounced Story's way I knew he would try to cut the runner down at the plate. He charged well but lost the ball in the exchange and most thought the play was over as it thudded into the grass.

But Rosell Herrera had sprinted to just behind the third baseman's usual spot and was in perfect position to pick up and throw the ball in one single motion, gunning the runner out at first. It was as heady a play as it was physically impressive, and to a chorus of his teammates yelling "Rosy!" I realized I'd seen something special.

I've never had particularly great seats to watch major league pitching. The times I've had a great view from behind the plate have been to see power arms like Jon Gray and Eddie Butler. For me personally, I've never seen anything quite like Tyler Anderson's curveball. And I wasn't the only one.

Speaking of discombobulating, Anderson's signature pitch has so much break and depth that it too can play mind games with the hitter as it dances its way to the plate. On this day, he was pitching backwards -- throwing off-speed early and putting guys away with fastballs -- to perfection.

As soon as the hitters felt like they could finally wait back and track the curve, a fastball without naturally devastating velocity was on them before they knew it usually for a desperately late swing-and-miss or weak pop out. He pitched four dominant innings, giving up zero earned runs.

I spoke with Tyler after his outing, mostly on the subject of his health. "I feel as good as I ever have," he said. Hardcore baseball fans know that "best shape of my life" stories can be overblown but in this case it cannot be overstated.

Anderson is frustrated by his lack of good health so far in his professional career as well as his lack of upward mobility through the system, but is bound and determined that this will be his year. He finds himself in a similar place as Juan Nicasio, who is beyond relieved to finally have an offseason where worked on the finer aspects of his game rather than just getting back to square one.

With grit and focus plastered across his face, Tyler Anderson knows he has a lot to prove and has every intention of proving it.

I was surprised when I first saw Dom Nunez donning the familiar garb of a backstop. PuRP No. 19 had a disappointing season in Grand Junction last year as his ability to make solid contact never translated into good numbers. When I spoke with him in 2013, he was firmly in good soldier mode about being asked to play the middle infield.

He legitimately was excited about the opportunity to play second and some shortstop and principally considers himself a baseball player who revels in taking the field at any spot. But when the shine of shin guards caught my eye as Dom sat on the bleachers next to me, I quipped, "Catching again, eh?"

His whole face lit up. Dom Nunez felt at home. "They told me I'm a catcher again." His body language made my next question unnecessary  as I asked if it was permanent and how he felt. His smile only got bigger and he nodded, "Love it."

It obviously remains to be seen how this will affect his play, but it is hard not to see this move as an advantage both for him and the organization. Nunez was asked to play infield because of his raw athleticism, great hands, strong arm, and mind for the game. All of those things become even bigger assets behind the plate where they are less common.

With Trevor Story, Rosell Herrera, and Ryan McMahon ahead of him on the infield depth chart (not to mention guys like Josh Rutledge and Nolan Arenado who are still very young) and the lackluster year from Will Swanner, Nunez immediately becomes one of the most exciting prospects at one of the Rockies' weaker positions. Charlie Drysdale already ranks him as the fifth best catcher in the system.

He has the body of a second baseman, the skill set of a shortstop and the mind of a catcher. If he slays his BABIP dragon -- his hitting develops the way coaches and scouts believe it should (even with the added physical demand of catching) -- this move could make Dom Nunez one of the more valuable commodities in the franchise.