In Part 3 of our five-part series, Drew talks with two of the most exciting prospects in the game, let alone the organization.

During my travels (what am I Magellan?) I met a gentleman named Gary. "Gentleman" was absolutely the right word choice as it turned out. Conjuring the purest manifestation of southern hospitality, Gary welcomed me to spring training, told me he was an avid Purple Row reader, and introduced me to a number of players.

I can't thank Gary enough for his help and even just for being a fun guy to talk baseball with.

He and his wife, Karen (also a baseball wiz), are a host family in Asheville, N.C., and have been coming to spring training for the last eight years. We had almost met the day before when I introduced myself to a player they hosted recently: Eddie Butler.

I gave the standard opening, "Hi, my name is Drew, I write for Purple Row." "Oh, cool," responded Butler with recognition. I told him that he pitched the first minor league game I ever went to (two years ago before I was writing for Purple Row) and that he had dominated.

"Well that's good," he laughed, "I'm glad I didn't have a bad one." I joked at the statistical unlikelihood of that occurrence and before I began to ask a question, Eddie beat me to the punch. "Is it your first time here?" he queried.

I told him it was and he responded, "what do you think?"

I attempted to wax poetic for a moment on being saturated by baseball, but when I got to the facilities he hopped right in. "Oh, man, isn't it awesome? Have you seen any of the others?"

"You should check out one or two of them for comparison. Some are nice. Some aren't even close."

At that, the prospect pitcher had to get back to his duties keeping score (and pitch counts and the like) and sending signals to the coaches in the dugout.

We had more time to chat the following day after he and his new roommate Jon Gray graciously agreed to take a photo with me despite the absurdity of my beard. 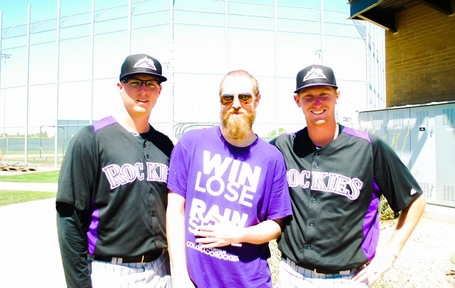 I had been speaking with Jon earlier that morning on a myriad of subjects. He was sporting a pair of glasses that looked to me like a post-modern version the Ricky Vaughn's.

He asked after the denizens of Grand Junction and about the drive down. We even groaned little bit about Oklahoma basketball. He and my mother shared a disgusted sigh over their upset in the NCAA tournament upset the night before.

The conversation turned, oddly enough, to the subject of baseball video games and I was surprised how much that seemed to pique Gray's interest. When I told him that I was currently playing a season (with a downloaded roster simulated to 2015) featuring him, Butler, David Dahl, and a few other of his minor league teammates, Gray seemed to peer into the future for a moment and couldn't hold back an ear-to-ear grin.

"That's pretty cool. How do they come up with ratings for players?" I briefly described what little I understood of the process and he asked, "so what is it like to pitch with me?"

I explained that his slider and change-up had nasty movement but unreliable location and that a 100 MPH fastball plays anywhere. He smiled and shrugged about the off-speed stuff then added, "Location still matters a lot. Especially at the higher levels, if you leave it over the plate these guys will gear up and hit it. Baseball is hard. At any level."

A mantra I've heard many times in my life, it somehow seemed more profound coming from someone who's numbers thus far might suggest he has every reason to believe baseball can come easy. Jon has no misconceptions about the road in front of him and much of the anxiousness and wide-eyed excitement I saw just a few months prior in Grand Junction had been replaced with bulls-eye focus and fiery determination.

Brimming with confidence, Gray's burning thirst for the game of baseball boils just beneath a calm and cool surface.

After having caught up with PuRPS No. 1 and No. 2 individually, it was pretty cool to witness a little of their developing dynamic the next day -- and my final day in Scottsdale. 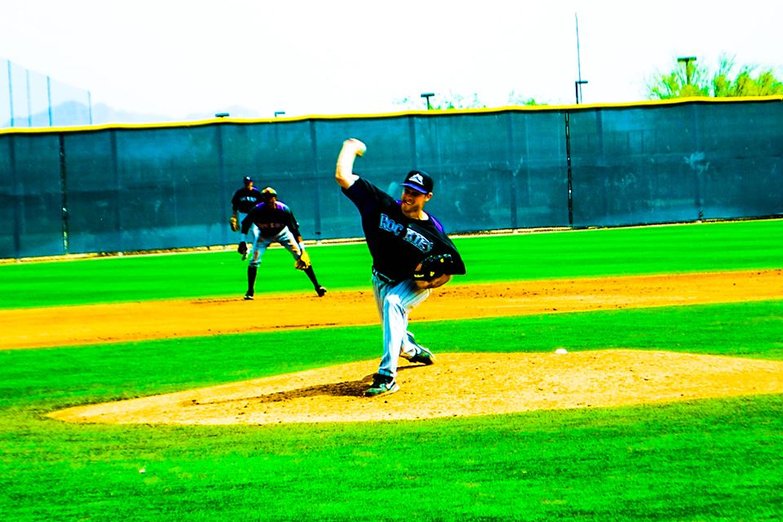 In Part 2 of our five-part series, Drew visits the backfields at Salt River Fields at Talking Stick.

They walked into the practice field area after all of the other players had filtered out and made their way to eat in preparation for the games that began in about an hour.

Once the few fans who remained got their autographs, a few hung around and the pitching phenoms stood for a short while to talk pitching with me.

Butler tells me that he has been toying with the idea of adding (or re-adding) a "show-me" curveball. He had thrown three curves in a game a few days before which very much seemed to catch the hitters off guard. "I won't fall in love with it the way Jon is with his change-up," Eddie quipped. "But I would, too; he is breaking bats with that thing!"

Jon chuckled and confirmed, "I'm feelin' pretty confident with it right now. It's diving in on righties, but I'm really liking it against lefties." When he was asked by one fan if the change-up was becoming his "out pitch," Gray was quick to laugh up a, "Nah, still my slider. And even sometimes my fastball."

But his confidence keeps growing in his third pitch, and the breaking bats are a good clue to how deceptive and rhythm changing -- and therefore effective -- his change-up is becoming. He says it lands somewhere in the 84-87 mph range on the radar gun.

Another fan asked Butler about his change-up's velocity and how he held it. "It can get up to 90-91," Butler said, "and I hold it the normal way. Nothing special." He took the liberty of gripping the baseball in demonstration anyway.

Butler says he has topped out at 98 mph this spring, and Gray at 99. And, Gray says, that is without even letting lose yet.

His resolve won't waver with a wait -- and he would bring it pitching on a sandlot -- but Jon was clearly itching to pitch in competitive games and against even better competition. Butler shares this mentally in spades. On the subject of his eventual arrival in the major leagues, Gray insists that he values every moment of his development but added, "I wouldn't mind having Christmas in the summer this year."

Jon Gray and Eddie Butler. We, and they, should get used to reading their names next to each other.