Jorge De La Rosa needs to step up and perform, regardless of Wilin Rosario's shortcomings behind the plate.

The Rockies' 2014 season started about as badly as it could have.

The team was blown out on national TV by a team that is predicted by most to finish in last place in its division, if not its entire league. And, perhaps worse than that, a fairly heated argument ensued between the team's de facto ace and starting catcher during the Marlins' decisive five-run fifth inning on Monday.

Look, we all get it: Wilin Rosario flat-out stinks behind the plate. He has one discernible skill as a catcher, and that's his cannon for an arm. Other than that, he possesses no sound qualities at the position. He can't block pitches, he can't frame, and he can't call a decent game.

But none of that matters when it comes to Jorge De La Rosa hanging him out to dry last night. 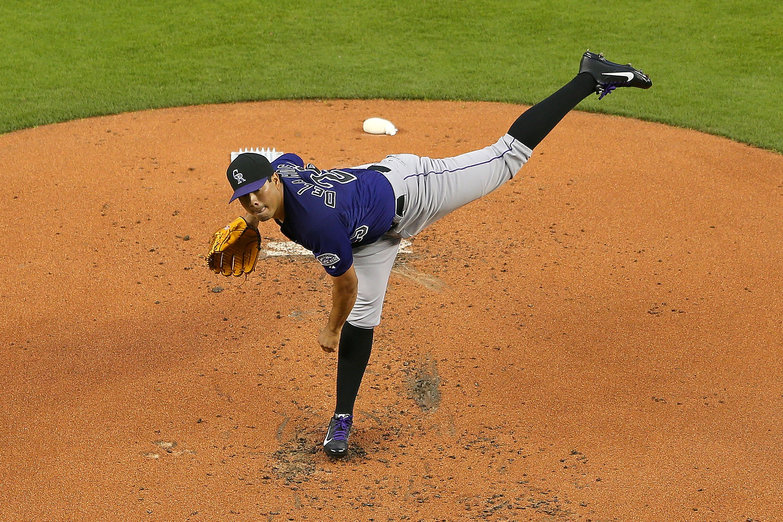 The Rockies opened 2014 with a thud as the Marlins hung a 10 spot on Colorado pitching.

The Rockies' battery was having a rough time getting on the same page after switching up the signals following Marcell Ozuna's leadoff double. Things came to a head three batters later, when Rosario finally decided to go to the mound in an attempt to get the signs figured out with his pitcher.

Rather than properly engage with the young catcher, De La Rosa instead muttered some words and pointed to the plate, telling Rosario in so many words to get off his mound. That triggered a visit from pitching coach Jim Wright, who tried to diffuse the situation, though De La Rosa was still visibly upset.

The blame for Jorge De La Rosa's struggles last night falls squarely on the shoulders of Jorge De La Rosa. Regardless of how Rosario is performing behind the plate, De La Rosa needs to do his job. And he certainly didn't.

As disappointing as it is to know that Rosario still hasn't nailed down the fundamentals of catching at this level, it's even more disturbing to see a 32-year-old veteran in his 11th big-league season unravel under the circumstances--especially when opposing pitcher Jose Fernandez, who is 11 years younger, demonstrated such good composure in front of what will likely be the largest crowd he'll see in his home park this season.

Going forward, De La Rosa needs to own up to his mistakes and let the young Rosario know that the meltdown was the pitcher's own doing. In addition, the Rockies need to figure out if that battery is going to work. Personal catchers, while kind of silly in the grand scheme of things, have been utilized by many successful teams over the years, and the Rockies might have to go in that direction if De La Rosa no longer feels he can operate to the best of his ability with Rosario behind the plate.

But they also have to be careful not to damage the confidence of their young catcher. His bat is a valuable asset, but it becomes a lot less valuable if his receiving and game-calling woes force him off of the position.

That's no help to the Rockies just as much as De La Rosa losing his cool in the team's most important game since last July.