The Padres haven't exactly gotten off to a scorching start, but they have a chance to make things real uncomfortable for the rest of the NL West as the season goes on.

The Rockies are finally out of San Francisco and now head to San Diego, a place where they've had a pretty good amount of success in recent years.

It's not like the Padres have fielded completely horrible teams in those years, it's just that the Rockies have had their number for whatever reason. San Diego has finished above the Rockies in the standings in each the last two seasons, although they are a combined 42 games under .500 since nearly winning the NL West in 2010.

Colorado is 11 games over .500 against the Friars over the last five seasons, including a 12-7 mark against San Diego a year ago. That number is heavily skewed by the Rockies' 6-0 start against the Padres, though, as the meetings evened out quite a bit over the final 150 or so games of the season -- particularly during the last month, when the Rox were swept at Petco Park.

San Diego fields a very similar team this year to the one Colorado got the better of in 2013, although the Rockies won't have the advantage of facing Edinson Volquez, who went 0-5 with a 12.43 ERA against the purple pinstripers last season. That alone might change things a bit in 2014, but it doesn't hurt that the Padres field one of the deeper offensive teams in the division to go along with an improved pitching staff.

For more on those things, as well as a bunch of other Padres-related musings, I chatted with Richard Garfinkel (better known as Darklighter) from SB Nation's Padres community, Gaslamp Ball.

Bryan Kilpatrick: I went into this season feeling like the Padres were a legitimate darkhorse postseason contender. They have outstanding depth on offense and their rotation seemed good enough to get by on most nights. Am I crazy for thinking that in the first place? And how much have injury issues changed the Friars' outlook?

Richard Garfinkel: You're not crazy at all. While there's a certain contingent of longtime, embittered Padres fans that have gotten cynical and jaded, I'm not among them. They're certainly a longshot for the playoffs, and probably getting in on a wildcard if they do, but it's not out of the question. Buster Olney was one of several big league pundits to pick San Diego as a contender.

The injuries have definitely been a big concern. Carlos Quentin's hurting right now, but that's not unexpected. If he plays 100 games, that's an achievement. Cameron Maybin's ruptured bicep tendon is more worrisome, if only because it means we'll be seeing more of Alexi Amarista in center field. Losing Josh Johnson is rough, but the biggest blow to the rotation was the news that Corey Luebke's first Tommy John surgery didn't take. The Padres had really hoped to see him return to service this year.

BK: Andrew Cashner brings upper-90s heat and has shown flashes of complete dominance over the past year-plus. Is this the year he puts it all together and vaults himself into the ace discussion?

RG: If he had moved into the rotation a little bit earlier last season, he'd already be part of that discussion. Throwing the first complete game of the season (and a one-hitter against the offensive powerhouse of the Tigers, at that) has certainly helped bring him to prominence. Switching from his fastball to that nasty slider he started throwing more often late last year is going to leave a lot of batters looking really stupid at the plate.

BK: Seth Smith was known as "Mr. Late Night" during his time with the Rockies and has already provided a couple of big blasts for the Padres. How do you feel about the move to acquire him, and what will his role with the team be as the season progresses?

RG: Trading Luke Gregerson for Seth Smith was a confusing move at first, and didn't go over well with fans. The signing of Joaquin Benoit brought it into much sharper focus, leaving the bullpen in good hands while improving the offense. Smith has started almost every game so far, but that will change when Quentin comes off the DL. When that happens, Smith will probably spell Quentin from time to time and be a bat off the bench.

BK: For a few years, the Padres have been considered owners of one of the better farm systems in the game. Of all that talent, who is closest to making an impact in the majors, and will it be this year?

RG: Don't expect to see a ton of farm talent this season. Joe Wieland and Casey Kelly should show up again around midseason, but they've both had cups of coffee before. The most talked about prospect in the system is, of course, catcher Austin Hedges. He's currently in AA with the San Antonio Missions, and probably won't see the big leagues before September. Fans are eagerly awaiting his arrival, though. He's been described as the best defensive catcher in all of baseball, and we're excited to see him shut down opponents' running game.

BK: Jedd Gyorko was very unheralded as a rookie in 2013 despite putting up very good numbers. Are we seeing him at his best, or is there a lot more on the way?

RG: I don't know that we'll see his offense improve that much, though it would be nice if he could draw a few more walks. His defense, while much better than many expected, still has plenty of room for improvement. But he only spent 51 games at second base before his major league debut last year, so there's still a lot for him to learn. 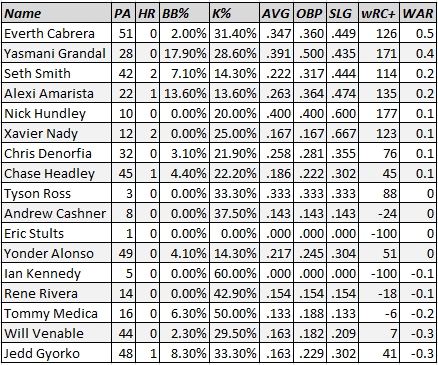 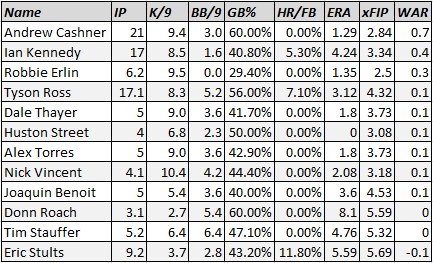