There are some key Giants players in a slump. The bad news is that they always heat up at altitude.

Since we last saw the Giants, they've scored a total of 12 runs in six games but somehow went 3-3 during that stretch due to a bunch of solid pitching performances.

Tim Hudson has been the best of the bunch, striking out 20 batters without issuing a walk in 30 innings thus far, but the Rockies fortunately will miss him in this series. The team does, however, have to face Madison Bumgarner, who owns a team-best 2.35 FIP, in the second game of the series. Bumgarner has had some problems with walks this year -- erratic control caused him to exit his last start after just 4⅓ innings -- but he remains extremely difficult to hit, as evidenced by his 11.3 strikeouts per nine innings. He's not a great pitcher in his career at Coors Field (4.27 ERA, 6.3 K/9), so at least the Rockies have that going for them.

Colorado is extremely fortunate to see Ryan Vogelsong, who did not pitch against the Rox in the series at AT&T Park a week and a half ago. Vogelsong has a 5.40 ERA / 4.94 FIP in three starts this season and the Rockies were not kind to him the last time they faced him, plating five runs on eight hits and a couple of walks in five innings -- in San Francisco.

Offensively, the Giants' starters have held up very well thus far, although the bench has been among the worst in baseball. Everyone in the starting lineup with the exception of Pablo Sandoval and Hunter Pence is off to a pretty fast start in terms of OPS+, and it's almost a given that those two will heat up with some time at Coors Field (Sandoval has 22 extra-base hits in 40 games in Denver, Pence has 19 in 35). Buster Posey is not hitting well compared to his usual numbers, posting a .238/.314/.444 line through 70 plate appearances, but he'll surely get going at some point as well. Let's just hope it's after the Giants leave the Mile High City.

That brings us to the players to watch for the Giants in this series:

Cain owns a sparkling 2.88 ERA, but is off to an 0-3 start.. That's because the Giants have scored a grand total of three runs in his decisions, including a big fat zero against Brett Anderson and the Rockies' bullpen (mostly the latter) on April 12. The Rockies are usually the perfect prescription for Cain when he's scuffling; he's 17-8 with a 3.15 ERA in 32 starts against Colorado, though Troy Tulowitzki (.317/.373/.633 in 67 plate appearances) remains his kryptonite.

The Giants' bullpen -- particularly the middle relief -- was not good a year ago, but the acquisition of Gutierrez seems to have gone a long way toward stabilizing the unit. The 30-year-old right-hander is off to a great start, striking out 10 batters in 10 innings while issuing only one walk. He's almost always been able to get a punch-out when he needs it, but if he can continue to avoid issuing walks, he could end up being an extremely value weapon. 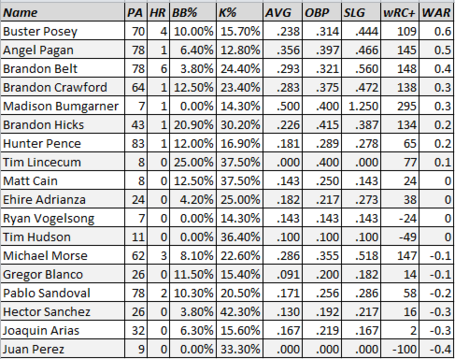 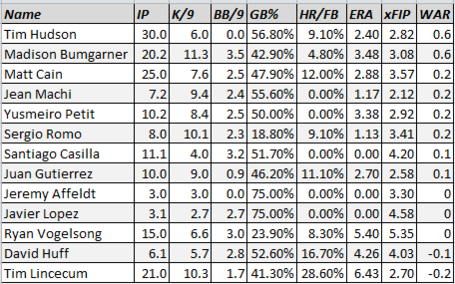