CarGo has really struggled since the Rockies departed on a west coast road trip in the second week of the season. What gives?

Share All sharing options for: Breaking down Carlos Gonzalez' slump

Rockies outfielder Carlos Gonzalez has hit .154/.214/.256 since April 11, when the Rockies began a seven-game west coast swing in San Francisco. CarGo homered in the game, but hasn't left the yard since and only has one extra-base hit during that time.

The 28-year-old star has been known to be a bit streaky in his career, but it's not often that a return to Coors Field from a struggle-filled road trip doesn't cure his offensive woes. However, in four games on the current home stand, CarGo is just 3-for-15 at the plate. Gonzalez is dealing with knee tendinitis, and that could be contributing to the problem, but then again, his slump started well before the injury was made public.

So, that begs the question: What's wrong with CarGo?

Using the eye test, it's pretty clear that Gonzalez is still hitting the ball hard. He's had more than his fair share of loud outs over the past couple of series, and his swing still looks as sweet as ever. Monday night was a slightly different story, but again, Gonzalez was hurt in the sixth inning of the Rockies' game against the Phillies on Sunday, so his performance might be able to be chalked up to the after-effects of that. However, he did hit a couple of fairly weak grounders, and that has become a bit of a trend since the start of his slump.

The hidden value of the Dexter Fowler trade for the Rockies 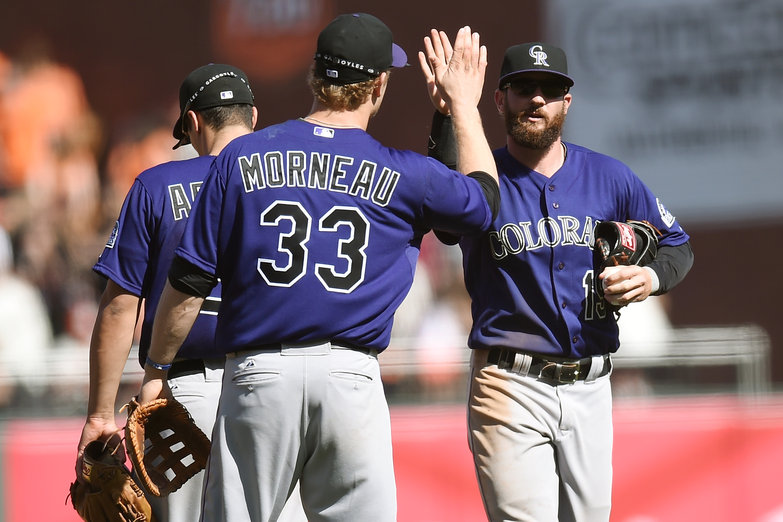 There were assumptions made about what trading Dexter Fowler in the offseason would mean for the Rockies, not all of which have proven to be correct.

Gonzalez is putting the ball on the ground a lot, as evidenced by his 1.60 GB/FB ratio over the past 11 days. With as hard as he usually hits the ball, that's not always a big deal, but consider this: In 2013, which was arguably CarGo's best season as a big leaguer, his GB/FB ratio was 0.94. When he puts the ball in the air, good things generally happen. A lot of that has to do with his home park, which of course, has as expansive of an outfield as any other in the game. The high amount of grounders has predictably affected CarGo's BABIP, which is a god-awful -- and completely unsustainable -- .161 since the start of the first Giants series.

So, there's going to be some positive regression here, even if Gonzalez were to hit grounders at a Ben Revere-like pace. But there's another thing that suggests CarGo won't stay in his slump for long. His line drive rate is only 15.5 percent for the season -- much lower than his career mark of 20.4 percent -- but it's been steadily climbing during his slump. CarGo's line drive rate over the past 11 days is 18.8 percent  -- still lower than his career average, but better than it was to start the season.

History plays a big factor here, as well. We know what Carlos Gonzalez is, and we know he's not going to keep hitting only .267 with a sub-.330 on-base percentage. He's also not going to have a BABIP more than 50 points under his career average going forward. Gonzalez will be OK, particularly when he shakes off the nagging knee issue. It might not happen in this series, and there's certainly a good chance it won't happen when Colorado embarks on a road trip through Los Angeles and Phoenix in a few days. But, soon enough, the "what's wrong with CarGo?" comments will be a distant memory.