Rockies vs. Diamondbacks series preview: They can't be this bad, can they?

The Diamondbacks are all kinds of awful early, but -- newsflash -- they probably won't be this bad for long.

Share All sharing options for: Rockies vs. Diamondbacks series preview: They can't be this bad, can they?

The Diamondbacks are 8-20 with a run differential of minus-59.

There's no way around it: Arizona is flat-out awful right now. And while a slow start is necessarily surprising for anyone, this level of bad from a D-Backs team that was supposed to contend in the National League West is pretty shocking.

But are they really this bad?

When looking at the rotation, it's hard to say no. Losing Patrick Corbin to a season-ending elbow injury certainly didn't help matters, but it didn't take a rocket scientist to predict that moving to a hitter-friendly environment would hurt Bronson Arroyo. He was due for a step back this season, and sure enough, Arroyo has a 7.77 ERA and is being killed by his lack of strikeouts through five starts.

To make matters worse, Archie Bradley, the team's top pitching prospect, has been thoroughly underwhelming at Triple-A, walking batters left and right while proving that he isn't ready to take the next step. That's a big blow to a team that had to deal with two of its Opening Day starters -- Trevor Cahill and Randall Delgado -- exhibiting similar problems commanding the baseball.

It's a shame that the rotation is in such shambles, because the bullpen isn't all that bad. A few guys have been victimized by poor defense (the D-Backs rank 12th in the NL in fielding percentage), while others have batted ball profiles that don't match their peripherals. Closer Addison Reed is in that category; he's been a strikeout machine but dealt with some poor batted ball luck early while Joe Thatcher has endured a similar penchant for giving up knocks. Former Rockie Will Harris is in the same boat; he racked up 13 strikeouts in 8⅓ innings but was demoted due to not only his roster flexibility, but also because he had a 9.00-plus ERA and gave up 10 hits, including a couple of homers.

The pitching might regress to the mean a little bit, but looking at the downward trend some of these guys have been facing over the last few years, chances are it's not going to get a whole lot better. However, the offense has already started to see some improvement after a horrible start. Sure, losing Mark Trumbo and his slug-heavy 111 OPS+ due to injury will hurt a little bit, but it shouldn't be too hard to replicate or improve upon his .264 on-base percentage. Meanwhile, every other starter sans slow-starting Gerardo Parra is above average in terms of OPS+, with Paul Goldschmidt and his .306/.352/.477 line leading the way. That's only likely to improve, and with the nice bounce-back season in the works from Miguel Montero, the offense shouldn't be much of a concern, especially now that this guy is heating up:

After a terrible start to the season, Hill is 9-for-19 with five extra-base hits in his last five games. Considering he's a .360/.418/.599 hitter against the Rockies in his career, he's likely going to be very dangerous in this series.

The 26-year-old right-hander will make his third career start on Saturday against the Rockies. His first two were a mixed bag; he allowed seven runs on seven hits to the Dodgers on April 19 before holding the Cubs to a run in 6⅔ innings on April 24. Bolsinger 15 strikeouts and five walks in 13⅔  frames.

Cahill was relegated to the bullpen for the first time in his career after posting a 9.17 ERA and 13 walks in 17⅔ innings as a starter. He allowed only one baserunner and racked up eight strikeouts in his first six innings of relief until having a major blowup against the Phillies on Saturday, when he was tagged for three runs on four hits and a pair of walks in the eighth inning of a 6-5 loss. 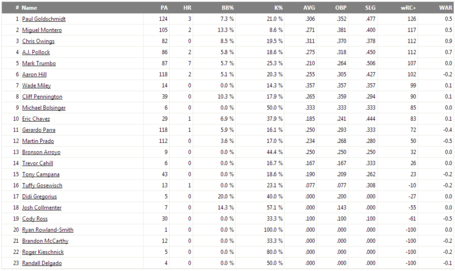