There was so much good in this game, but it also might lead to something very, very bad.

Let's start with the bad news. Tyler Chatwood left tonight's game with the bases loaded and nobody out in the sixth inning with what's being described as "elbow tightness."

This is the second consecutive game in which Chatwood's shown very little command and has gotten hit hard when he did find the strike zone. After his team handed him the lead the in top of the sixth, Chatwood came out and gave all the momentum back to the D'Backs by allowing two walks and a single. Fortunately for the Rockies, they were able to get out of this mess.

Unfortunately for the Rockies, these are the types of control problems that often precede more significant injuries when coupled with "elbow tightness." So far, the Rockies have been unable to keep their best starters on the field, and if they're on the verge of losing Chatwood, their road to success is going to get much more difficult. The news on this, which could go in any direction at this point (good or bad), is a major, major story.

As far as the game itself goes, it couldn't have gone much better for the Rockies. Three different players posted a Win Probability Added (WPA) over .250; the highest of which (.373) didn't come from a hitter.

Chris Martin entered the game in relief of Chatwood in the sixth inning and crushed Arizona's best chance of the night to put a big number on the board. He first got Chris Owings to ground out to third, which allowed Nolan Arenado to throw home and easily nail Aaron Hill at the plate. Martin then struck out Roger Kieschnick for the second out of the inning before getting Tony Campana to ground out to first to end the frame.

This is where Arizona did the Rockies two huge favors. First, the play should have been challenged by Arizona manager Kirk Gibson. When slowed down frame by frame, it appeared as though Campana may have beaten Martin to the bag. The play probably wouldn't have been overturned as it was so close there might not have been conclusive evidence to flip it, but as a Colorado fan, I'm very glad the umps didn't get a look at this a second time.

Gibson must call for a review on that play. It was a run-scoring situation (as Eric Chavez would have come in the back door from third) and could have led to several more runs with Gerardo Parra and Paul Goldschmidt coming up next. Even though it was a play that could have gone either way, the moment was too significant to hand the Rockies.

The second player to post a huge WPA on the night (.346) didn't even enter until the middle of the eighth inning as a defensive replacement. Drew Stubbs came into the game in center field for Corey Dickerson after Corey made the second out of the top of the eighth to help preserve what at the time was a 4-3 Rockies lead with his glove in center field. However, that idea went up in smoke when A.J. Pollock clanked a two-out solo shot off Boone Logan and the left field foul pole to tie the game at four.

Stubbs then led off the ninth inning hitting .238 with a .545 OPS and no home runs on the season when Purple Row community member dyzz (Dylan Z.) made a nice observation... 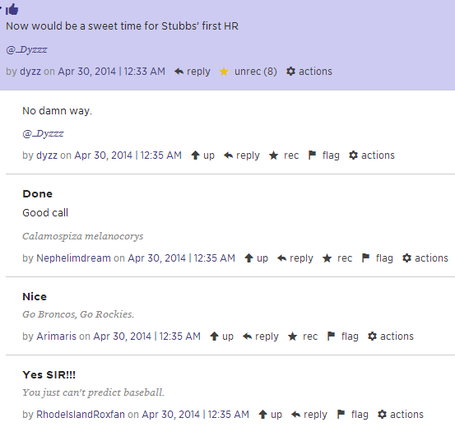 Just like that the Rockies took the lead back on an opposite field shot.

Then in the bottom of the ninth, Stubbs made the catch for all three outs, the last of which looked like it was going to be big trouble off the bat as seen in the face of closer LaTroy Hawkins at this link.

This is why you don't move Stubbs. This is the type of depth off the bench that can win you games that the Rockies have sorely lacked in recent seasons.

The third member of the big WPA club (.254) was a familiar face: Tulo. His biggest contribution came in the top of the sixth after Carlos Gonzalez led off the frame with a double. It was the third time Tulo had seen rookie Mike Bolsinger in the game, and he had all the data he needed as he got a hold of a pitch on the outer half of the plate and drove it the other way over the right field fence towards the pool area Arizona keeps in their outfield to put the Rockies on top 4-3. It's the seventh home run of the year for Tulo, and the fifth home run he's hit in a row that's given the Rockies the lead.

For the season, Tulo now has a .376 / .486 / .753 batting line (1.239 OPS and a 225 WRC+), and perhaps just as impressive, he's walked seven more times than he's struck out. On hitting alone, he's in the conversation for best in the league this year, but when you add in the fact he's doing it playing top notch defense from the shortstop position, there's no debate who the best player in the NL has been so far. If he stays healthy this year and long term, we might be watching the career year of a future Hall of Fame player.

Here's how crazy baseball can be sometimes, as well as a glimpse into how bad literally everything is going for Arizona right now. In the top of the eighth inning, Chris Owings made a remarkable catch on a lazy fly ball hit off the bat of Jordan Pacheco down the left field line. Now it's hard to tell if the ball would have landed fair or foul, but without the catch, Pacheco at the very least would have had another swing. If the ball landed fair, another batter would have automatically come to the plate.

I bring this up because that next batter would have come in the pitcher's spot. I don't know how that would have worked out, but I do know this: if Pacheco reaches there, Drew Stubbs does not face Addison Reed in the ninth inning and hit the game-winning home run. Instead, the top of the order would have been due up. This is pretty much Arizona's season in a nutshell right now. Even when they do something good, It comes back to bite them in the end.

The D'Backs are unquestionably the biggest disappointment in MLB. They are now 8-22 overall, 2-15 at home, they already have a run differential of -63, they've allowed 5.83 runs per game (the 2012 Rockies allowed 5.49 runs per game), and their top prospect Archie Bradley isn't going to be able to help any time soon as he's been put on the DL. You can't clinch a playoff spot in April, and usually you can't even run yourself out of the race, but it seems pretty clear that the D'Backs have already done that. What a disaster!

One other note from this game: both Nolan Arenado (19 games) and Justin Morneau (13 games) extended their hitting streaks.

The Rockies will look for the sweep Wednesday at 7:40 p.m. MT when they send Jordan Lyles (3-0, 2,93 ERA) to the hill to take on Josh Collmenter (1-2, 3.38 ERA). So far, the Rockies have had three chances at a sweep this season and have lost the final game of the series every time.