The White Sox had one of the league's worst offenses a year ago, but they should be improved this year and are probably relishing the opportunity to hit at Coors Field.

The White Sox and Rockies will square off at Coors Field this week for the first time since 2011, when Colorado lost two out of three to the Southsiders as a result of bad bullpen performances.

The Rockies started out this season with the same type of issue, though the unit seemed to right the ship a bit in a series win over the Diamondbacks over the weekend. To grab another series victory, the back-end of Colorado's rotation will have to pitch better than the front part has in order to keep an at-times potent White Sox offense at bay.

I say "at times" because in 2013, the White Sox offense ranked at or near the bottom of the American League in most categories and finished the season with a collective OPS+ of 82. Among full-time players, only Alex Rios, who was traded midseason, and Adam Dunn ended up with average or better numbers. It's pretty safe to say that Chicago's offense was a dumpster fire a year ago, but things look a little better heading into this season.

First, the team won the Jose Abreu sweepstakes, beating out a whole bunch of teams -- including the Rockies -- for his services. Early returns have been OK; the 27-year-old Cuban slugger has three extra-base hits and has drawn a couple of walks in six games.

The White Sox also appear to be ready to give promising young outfielder Avisail Garcia regular playing time. Like Dunn and Rios, Garcia finished with an above-average OPS+ in 2013, though his sample size was much smaller. The 23-year-old native of Venezuela has drawn comparisons to Miguel Cabrera. He probably isn't going to live up to those, but he does have a chance to be presence in the middle of Chicago's lineup for several years.

The team still has Dunn, who has already smacked a couple of homers this year but has also struck out eight times. Not much changing there. And Paul Konerko is still kicking around as well, though he's set to retire at the end of the season. Konerko has played in only three games this season and probably won't see much time in this series, but in the event he gets a late-game pinch-hit appearance, Rockies fans should give him an applause. Konerko is sort of like their Todd Helton; he has been with the Sox for 16 years, hitting .282/.359/.495 with 2,250 hits and 427 home runs during that time.

No Q&A this series, but South Side Sox did have me on their weekly podcast to talk about the Rockies. You can listen to that here: 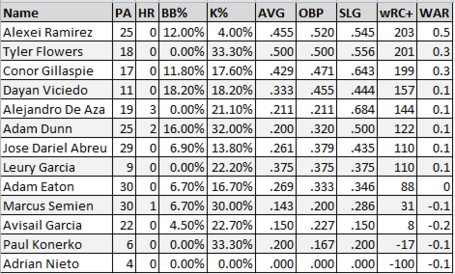 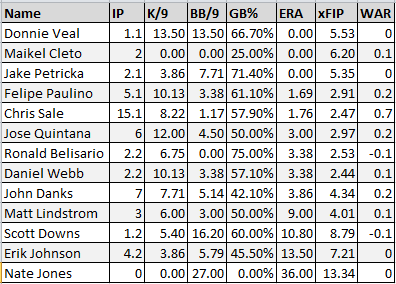