The Colorado Rockies, as a franchise, are not good at bringing up pitching talent. I’m not trying to be mean; it’s just a fact which with we all seem to be overly familiar. However, this history is on the cusp of changing right before our eyes in Tulsa. The rotation of top-pick flamethrower Jon Gray, Futures Game Darling Eddie Butler, and under-the-radar excellent Daniel Winkler has prospect hounds across the country drooling, and Rockies fans praying that nothing goes awry.

A few years ago I moved from the Denver Metro area and 25 trips to 20th and Blake a year to Memphis, Tennessee, home of the Triple-A affiliate of the St Louis Cardinals. This would be a difficult transition for anyone but considering the fact that I am usually introduced as "the biggest Rockies Fan I know" and the geographical tyranny of being over 4 hours from the nearest MLB stadium, and it gets a little harder. I have found MLB.tv can only take you so far, especially being blacked out of Cardinals, Reds, and Braves games (which included this past weekend).

Triple-A baseball can salve the wound, but when it’s not an affiliate of your team, it doesn't matter how nice the stadium is (and AutoZone Park is legit), it’s difficult to care. Purple Row and the Purple Dinosaur Podcast have helped tremendously (at this point I pause to give a hearty THANK YOU to those involved) but this season they've merely fueled the fiery embers of this passion to create an obsession that would make someone drive 2 hours to see a Double-A baseball game when there is a Triple-A baseball game a mere 5-miles away.

All the coverage, both Purple-hued and national, for that Tulsa rotation gave me an insatiable itch. I wanted to see them for myself. I had to see them—any of them—before they make it into purple pinstripes. So when I found out Jonathan Gray was scheduled to pitch in "nearby" Little Rock against the Arkansas Travelers on a Saturday, it didn’t matter that I had to be moving all day, I had to make it work. I grabbed my buddy Parker, the only person I’ve ever met (in person) with whom I can discuss the relative merits of UZR versus DRS, and we went set out to make the 2 ½ hour drive for some prospect chasing.

(Side note: driving through Arkansas on I-40 is one of the most miserable driving experiences you can have. It’s almost like the people in the Arkansas Department of Transportation sat down, decided to rip up all the roads, and then made a plan on how to fix them. I do not recommend this.)

We managed to get to the stadium—which exceeded our expectations considerably—about 15 minutes before first pitch, but the beautiful Saturday afternoon sunshine seemed to draw a everyone within a 12-mile radius and so we spent 10 minutes waiting in line. We asked the girl at the ticket counter to find us two tickets behind home plate, preferably left of center, a little elevated, in order to get a perfect view of our quarry.

Our seats 12 rows off the field behind home plate set me back $16—for both seats. This is the obvious advantage of Double-A baseball. My buddy bought a scorecard and some beers, and we settled into our seats just as Jonathan Gray was striding out to the mound for the bottom of the first. I watched Gray and the radar while my partner in crime kept close score for the Rockies farmhand.

It's easy to see why everyone is so high on this guy. He has a nice easy motion and great command. His stuff was working really well; the Travelers hitters were swinging early in counts but nothing was hit particularly hard. This said to us that 1) he was throwing strikes, and 2) there must have been some great movement. His breaking stuff (though our seats were good, I don’t exactly have a "scout’s eye" for this sort of thing) was nasty, as evidenced by the big swings a couple guys took on 77mph and 80mph pitches. 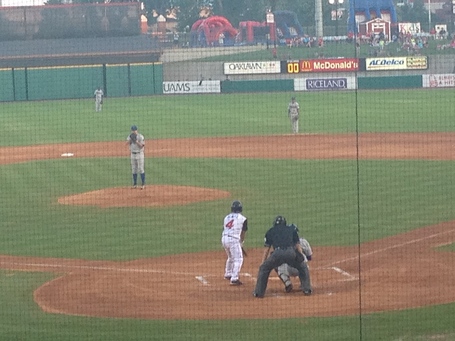 He was perfect through 4.2 IP and looking dominant when he allowed a "tweener" double to left-center that had both CF Delta Clearly Jr and LF Brian Humphries diving (and missing). The next at bat went 13 pitches, with DH Brennan Gowens of the Travelers fouling off 7 straight, including a couple of dropped foul tips that would've ended the inning had Murphy been able to hold on (it was clear at several points during the at-bat that C Tom Murphy was a little frustrated). Gray was working the zone with different pitches but finally issued ball four (again, Murphy was visibly frustrated at this point).

After a coaching visit to the mound the next batter hit a shot to third that Jayson Langfels knocked down and made the play. That was as interesting as it got for Gray until the seventh. He allowed a two-out homerun down the left field line, followed by a rocket down the first base line (off the umpire) but those were of only about 4 well-hit balls all night.

He was mixing his pitches well, seen clearly during a 6th inning at bat where he challenged a hitter with some high heat and then threw a FILTHY bender to get the strikeout. He only had two K’s on the night; we suspect he was tasked with working more control on this outing, perhaps focusing on his changeup. He wasn't really dialing up the fastball that often, but the stadium radar gun never had him above 93mph so we decided not to trust it.

As stated previously, batters were pretty aggressive early in counts so his pitch count stayed low, and the 13-pitch at bat against Gowens was more than any other 5 ABs combined. He came out having faced 24 batters and having thrown 74 pitches by our count, 54 for strikes. He had a bit more fly outs than ground outs (11:6), but allowed very little solid contact regardless. Thanks to some rare run-support, Gray even managed to come away with the win because we all know how much those matter.

The year of seasoning down in Tulsa will be well worth it if Gray can come up next year with such great stuff (and the command to go with it) to start mowing through the NL West. If most of the lineups in the Texas League are like this one, he's going to have too many guys jumping on strikes early in the count to really learn how to pitch in a way that will succeed in the majors.

I'm not saying call him up now (and I would never advocate sending someone to Security Services Field to pitch if it can be avoided), but don’t be surprised if he has some growing pains early next year while he adjusts to a higher level of competition. This is essentially an argument for a (minimum) September call-up so he can adjust.

Once Gray came out there was little incentive to continue watching as closely as we were. We wondered the stadium—again, very nice for Double-A—and tried to figure out when this Angels affiliate would install their Mike Trout statue (he played 91 games there in 2011 before his first ML call-up). My buddy managed to win a free Timex watch from a scorecard promotion.

As soon as the Drillers recorded the 27th out we were headed back to the parking lot in order to avoid the massive traffic often seen in North Little Rock on Saturday nights. We drove home listening to west-coast baseball on MLB At Bat, checking fantasy lineups, and discussing the wonder of being able to see what very well could be one of the next great young pitchers for $8 and a 2 ½ drive. The itch had been scratched—at least until the next big prospect comes within range.