Either the numbers are lying or the game is rigged

The Rockies might literally have a mountain to climb if they ever want to win a division title.

Share All sharing options for: Either the numbers are lying or the game is rigged

For baseball nerds who like numbers, it doesn't get much better than wRC+ when measuring a player's offense. Based off a 100 = average, greater than 100 = above average, and less than 100 = below average scale, it's complex in its calculation but simple to understand and compare once tabulated.

(Technically in the National League the average comes out to about 95 or 96 instead of 100 because of the pitchers batting and the formula getting slightly altered, but the idea is the same.)

The best thing about wRC+ is that it's park and league adjusted, meaning we can take guys who play in different parks and different eras and put their wRC+ numbers next to each other and get a really good idea of how they stack up.

It all works really well, until the Rockies come into the equation. Their numbers seem to reveal either a breakdown in wRC+, or worse yet, a breakdown of a competitive balance as it relates to one team within the sport.

Here's what I'm talking about: Below are the wRC+ numbers the Rockies have put up at home and on the road each year starting in 2002. Why 2002? Well for one, that's when the humidor was installed at Coors Field, but it's also as far back as FanGraphs will let us look at these numbers for teams as a whole so it works on two levels. 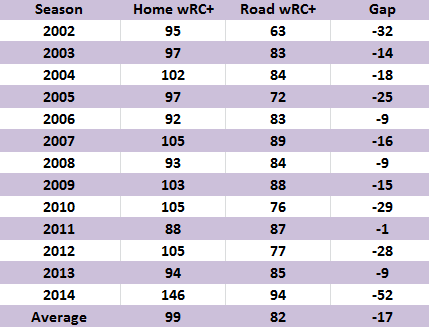 There's so much to digest here. This data could produce about a dozen subplots that would all make their own compelling series of articles.

However, I want to focus on something in particular. Look at the gap between the home wRC+ numbers and the road wRC+ numbers for the Rockies. It's at least nine every single year with the exception of 2011, and it's been 25 or larger in five of 13 years the data is available.

This shouldn't happen. Remember, wRC+ is supposed to take the park into effect. A small swing in the numbers would make some sense as most hitters do find more success in their home park, but the enormous gap here can't be explained by that morsel.

Add these figures up over the years, and it comes to that jarring set of numbers at the bottom of the table. A 99 wRC+ in Coors field, and an 82 wRC+ on the road. That 17 point swing in wRC+ is about equal to the difference in career wRC+ between Troy Tulowitzki and Seth Smith. In other words, WAY too large to be explained by comfort in your home park. Something else is going on here. Something big.

For more context, I decided to look up the gaps in home wRC+ and road wRC+ for the other teams in the National League over this same period (all games from 2002 through 2014). What I really wanted to see is if the Rockies represent some sort of huge outlier. Here's what the numbers show. 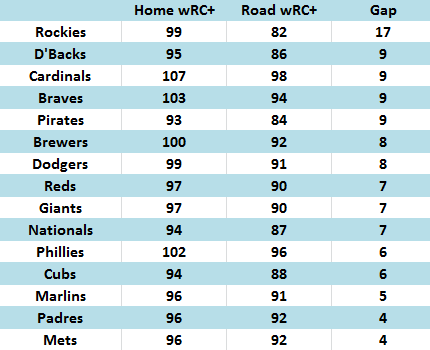 Now the plot really thickens. While the data does confirm the general idea of teams naturally hitting better at home than on the road due to familiarly of playing in the same park over and over again, the rest of the National League falls into a pile  where that advantage is confined to a small window between four and nine notches on the wRC+ scale. If you average out the difference in wRC+ numbers at home and on the road for the other 14 National League teams, it comes to a difference of seven.

However, for the Rockies, that number jumps to a staggering 17, which is miles and miles outside of what we see from any other team. Again, with a park adjusted stat like wRC+, we shouldn't see wildness like this. It's supposed to compensate for the environment and tell us how good a player or team is offensively regardless of location or time.

This leads us to a chilling reality where one of two earth-shattering notes almost has to be true. Either wRC+ is wrong when it comes to the Rockies and how it adjusts its formula to Coors Field, or the Rockies are playing a game that's rigged against them.

If the former explanation is correct, the road wRC+ numbers are correct and the Park Effect formula does not penalize our hitters enough for the offensive boon they receive for playing 81 games a year a mile above sea level. In this scenario, the Rockies have actually put the worst offensive product on the field in the National League since 2002 as indicated by their road wRC+ number. It's only been masked by the generosity of Coors Field and the inability of wRC+ to properly account for it. It seems unlikely with guys like Todd Helton, Matt Holliday, Troy Tulowitzki, and Carlos Gonzalez on these rosters, but it would fit one of the plausible scenarios.

If the second explanation is correct, wRC+ is accurately (or very close to accurately) accounting for Coors Field, and in that scenario the Rockies since 2002 have actually put out an offense closer to the 99 wRC+ number. However, because the Rockies' hitters have to adjust to the abrupt changes in breaking pitches at sea level, their offense gets considerably worse on the road to the point where it causes them to lose an extra handful of games every season that no other team would lose.

If we take the National League average gap in wRC+ for the other 14 teams between home and away numbers, the drop off is about seven points, meaning that the Rockies should have a road wRC+ of about 92 over the last 13 seasons. Instead, that number is all the way down at 82. This means that Rockies could automatically be sliding five pegs down the wRC+ scale when you look at their final overall numbers at the end of each season. This would be true for individual players and the team as a whole.

In other words, Todd Helton is not a career 132 wRC+ hitter as it says on his FanGraphs page, he's actually a career 137 wRC+ hitter who had to play 81 games on the road each year in an adjustment environment no other team has to face. This could be a big subject when his Hall of Fame eligibility starts coming around, especially since Wins Above Replacement (WAR) is directly tied to these  Park Adjusted numbers, but for now, let's focus on the bigger issue. 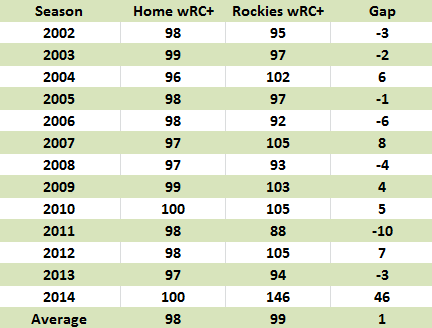 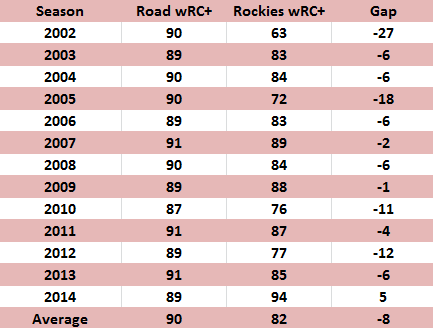 The home numbers show the Rockies bouncing up and down as an offense each season. There's some good years, some bad years, and some very close to average years. It's what you would expect to see from a general test sample of a club who's had some big stars put on the uniform for several seasons and some big holes in the lineup for several seasons. In short, if the wRC+ Park Factor numbers are incorrectly compensating for Coors Field, I wouldn't expect the numbers to line up as close to common sense as this. It should produce something wonky, and instead this seems very reasonable.

This is a huge problem for a franchise that already has to deal with two behemoths in its division in the Dodgers and the Giants. The Rockies simply can't afford to deal with something that's going to rob them of a handful of wins every single season from here to eternity; and yet, that seems to be the hand they've been dealt.

They are playing against a casino, and the house holds all the cards. The differences are subtle year to year, but as more than a decade's worth of evidence piles up, it seems to point to a clear and heart breaking message. For the Colorado Rockies, the game appears to be rigged.