The San Francisco Giants are the luckiest team in the league this season. It's not just something we like to say here at Purple Row either - The numbers actually bear it out.

Share All sharing options for: The Giants are in the casino again and they just hit another five card 21

There's a very underused advanced stat in the sabermetrics world known as tOPS+. Don't be scared of it; it's actually quite simple to understand.

The tOPS+ metric takes a team or player's OPS in a certain situation and compares it to their overall OPS by ranking it on a scale where 100 = average hitting, greater than 100 = above average hitting, and less than 100 = below average hitting. What makes tOPS+ special is that it allows us to see if a player or team is performing above or below their normal production in specific situations.

In any case, this is a good time to see which teams are getting more production than they really should be and which teams should expect to see a boost in production soon after getting unlucky for the first couple months of the season.

Before we do that however, I want show everyone that hitting better or worse than usual in high leverage situations as a team is in no way a repeatable skill for any club. It just takes a long time for things to balance out and teams can get lucky or unlucky for smaller periods of time before that happens. Here's the tOPS+ numbers in high leverage situations for all the National League teams over the last four seasons coming into 2014. 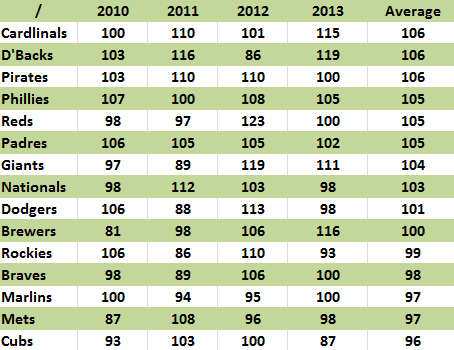 (Data for all tables provided by baseballreference.com as of 5/29/2014)

As you can see, these numbers jump all over the place from season to season for every team with no real correlations; and the more data that accumulates, the more everybody's tOPS+ regresses back towards 100.

Here's a similar table of data, except this time it's the tOPS+ against the pitching of every team over the last four years. So here, the teams with the lower tOPS+ numbers are the ones getting extra production out of the high leverage situations. 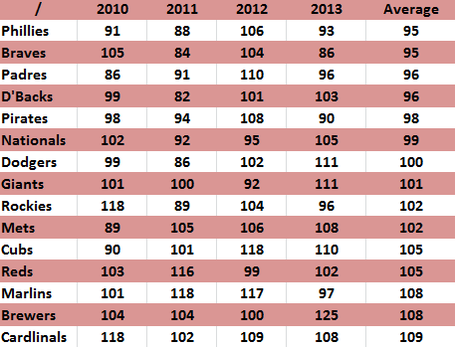 Once again, nothing here is repeatable for any club, and while some of those four year average numbers may look significant, they are tiny in their deviation from 100 when compared to what happens when the sample size is a year or less.

Knowing this, we can get a greater appreciation for how lucky or unlucky teams are getting in high leverage situations for the first two months of the 2014 season where the tOPS+ numbers are more extreme.

Without further ado, here's the tOPS+ numbers for all National League teams this seasons along with their overall OPS and batting average on balls in play (BABIP) numbers in these situations. 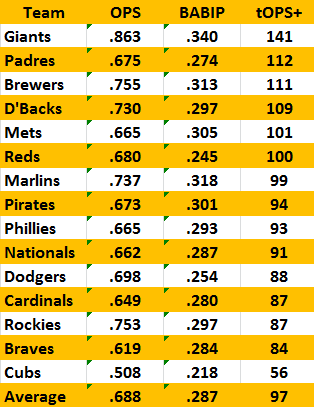 It should come as no surprise to anyone who's watched the Giants play a good chunk of games this season that they've been the luckiest team in the league when it comes to the ball bouncing their way in big moments. Not only is their tOPS+ number obnoxiously high, but their BABIP is also by far the highest in the league, further fueling the evidence which suggests they've been getting extremely lucky.

This is revolting all by itself, but these are the Giants, where the never ending parade of good fortune raining down on them runs deeper than the ocean and higher than the sky. So naturally, they're not done pigging out on their share of feel jobs from the baseball gods.

Here's the tOPS+ numbers against the pitching of all National League teams this season along with their overall OPS and BABIP numbers allowed in these situations. Once again, in this case, the teams with the lower numbers are getting luckier. 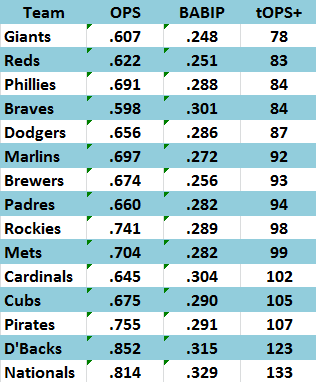 Not only are the Giants the luckiest NL team in high leverage situations this season offensively, but they've also been the luckiest in high leverage situations in preventing runs. It's one thing when a team you don't like is just better than everyone else,but it's beyond infuriating to watch one of those teams win game after game because the ball bounces their way in the most important moments.

Just how much luckier have the Giants been than everyone else in high leverage situations overall? Well, here's the combined percentages each team is above or below average in these spots for the hitting and the pitching this season.

The Giants are pretty much in their own world where unicorns fart rainbows when it comes to this. They've had so much good fortune that even if they have a normal tOPS+ on both sides of the ball for the rest of the season, their luck factor would still be higher (21% at season's end) than the luck factor of the second highest team right now.

Okay, now for a little bit of good news and more bad news.

The good news is that the Giants are not anywhere near as good as their 35-19 record indicates. Luck has inflated that thing like a bulging cyst.

The bad news is that the damage is already done in terms bringing them from a fringe contender to a likely playoff team. We can expect their tOPS+ numbers to normalize from here, but those 35 wins are already in the in the bank. The Giants are currently 16 games north of .500, and if they play 54 up and 54 down from here, they still win 89 games. In order to get them back to their Vegas and popular preseason projection win numbers, lady luck has to deal them several bad hands to make up for what's already happened.

Either that or they just have to be an even worse team than we all think - Which is possible. The Giants for instance went 48-64 over their final 112 games last season in a display of just how vulnerable they are if they don't get near perfect health from their starting rotation. But as we sit two months into the 2014 season, things really couldn't be breaking any better than they are for the Giants right now.

I expect this to change dramatically by September as I really don't see the true talent of this team being higher than 85 games, but there's a real chance the wins they already have locked up in the bank could be the difference in getting them into the playoffs somewhere in the 90 win neighborhood. Then, once you get into MLB's fluke fest playoff structure, anything can happen.