Prospect Roundup: Tyler Matzek is on the verge of being promoted, but is he most deserving?

Using a stat called Game Score, we can determine which Rockies pitching prospect has performed consistently at the highest level this season.

Share All sharing options for: Prospect Roundup: Tyler Matzek is on the verge of being promoted, but is he most deserving?

We've now completed the second month of the minor leagues and the wheat is beginning to separate from the chaff when it comes to the top prospects. One of the clearly pressing topics for the farm is the question of who will become the next top pitcher to earn a promotion to the major leagues?

The Rockies started strong out of the gates, producing a winning record and a respectable team ERA which ranked 19th in the majors for the month of April. Injuries to key starters and the recent foibles of Franklin Morales have dropped the Rockies a few spots to No. 25 and resulted in a losing record for May-- let the clamoring begin.

Triple-A starters;Tyler Matzek and Christian Bergman could be considered closest to the majors, since they've reached the zenith of the minor leagues and wouldn't be skipping a level. Matzek is especially in a good position as he's on the 40-man roster. The 23-year-old Matzek is one of the youngest pitchers in the PCL and had a solid start to the season. The 26-year-old Bergman is a former CAL league pitcher of the year and has dominated in elevation, producing a 1.84 ERA in Colorado Springs this season.

One of the stats I find useful in evaluating pitchers is Game Score (GmSc), a value developed by Bill James to measure a pitcher's single game pitching performance. Anything over 70 is considered elite and a score under 40 is subpar-- last season Eddie Butler had two games of 80+. For more information on GmSc, I recommend the SABR.com article written by Jeff Angus. 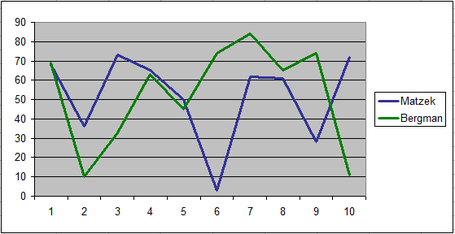 Comparing the Triple-A pitchers through ten games and it's apparent that Matzek has had an up-and-down season. There was the game on May 5th where he earned a score of just three by giving up eight earned runs and only two strikeouts. Then there was his most recent game, when he earned a 72 GmSc for pitching a shutout in 7.2 innings and also hitting a home run (which didn't count towards his game score).

Christian has been trending up until recently when a three-inning shellacking resulted in a score of 11. His peak was back on May 8th when he produced a 84 GmSc with eight shutout innings, while striking out seven and allowing just two hits. His most recent outing isn't represented on the chart and ended as a respectable 60.

Pitchers in the Tulsa rotation have a disadvantage in being promoted to the Rockies. They would be skipping a level, which isn't completely uncommon among Rockies promotions, but they would also need to be added to the 40-man roster requiring someone to be DFA'd. The players most likely to be removed from the 40 is Rob Scahill or Raul Fernandez, the problem with that solution is that the Rockies will need to clear those two roster spots when Brett Anderson and Tyler Chatwood come off the 60-day disabled list. 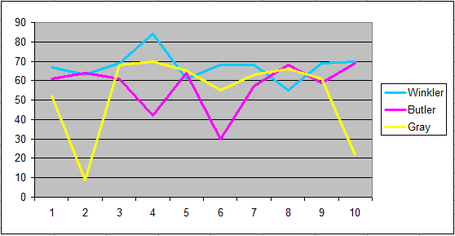 Dan Winkler has been the most consistent among the Tulsa rotation, with a high water mark of 84 matching Bergman's best outing. Meanwhile Gray and Butler have been less consistent, showing flashes of good outings, mixed with some bad ones as well. Tyler Anderson isn't represented on this list, because I didn't want to clutter it. The left-handed pitcher has been consistent, like Winkler, except his numbers have averaged in the 50's, which is frankly, just average.

The part that concerns me about Eddie Butler is he hasn't flashed the domination which set him apart last season. Not only are Butler's strikeouts down, but so is his ground ball production which has resulted in lower Game Scores. On the Triple-A side, Bergman and Matzek are showing inconsistencies which makes it hard to fully back them at the top of of the promote-me-now list.

The part I do like, is how Dan Winkler continues to dominate and seems to be getting better and smarter as a pitcher. He's racking up the strikeouts and picking up steam even though hitters are getting multiple looks at him. The right-hander even struck out A's prospect Max Muncy, considered by Baseball America to have the best strikezone discipline in the Oakland A's organization.

Colorado still has another month before Brett Anderson or Tyler Chatwood will be ready to return from their injuries, so who will the Rockies promote when they need a prospect to step up? My money is on Matzek, he's the only pitcher already on the 40-man roster and is showing maturity and imploding less than at any time in his career. However, the pitcher who has consistently pitched the best, and who I really want to see get a shot is Dan Winkler.

Hottest Prospects in May

Hottest prospect videos of the week

Kyle Parker launches an opposite field home run in Memphis.

Tyler Matzek homers in a 2-0 win in which he also pitched 7.2 shutout innings.

I promised Junction Rox video of Correlle Prime stealing home from his game on May 9th.