Last season, we introduced Drag Factor here at Purple Row to illustrate how poor the Rockies depth was on offense. This season, we'll use it again to show how much the Rockies have improved in this department.

We've reached an interesting point of the season for baseball fans who like numbers. The sample size of data is still not huge, but it is getting large enough to carry some weight. This means it's time to start checking in on things like the Drag Factor metric we introduced here last season.

For those who are unfamiliar with our home made stat, it's designed to measure how much "bad offense" is in your lineup and dragging down the positive production of the good hitters. This has been a big problem for the Rockies in seasons like 2011 and 2013 when they received outstanding production from guys like Troy Tulowitzki and Carlos Gonzalez but also had several below average hitters get a large number of plate appearances which destroyed their overall offensive production.

For the math folks out there, here's the equation we use to calculate the Drag Factor scores.

(If you're not familiar with wRC+, here's a link that explains the metric.)

In a nutshell, we're looking for players who have a very low wRC+ and a very high number of plate appearances. The more extreme the combination of each of these two factors are, the higher a player's Drag Factor score is going to be.

To get a proper context of where the Rockies offense is right now, we have to go back and compare it to other teams and other seasons. So let's start with the 2013 team. Here's their final season Drag Factor chart. 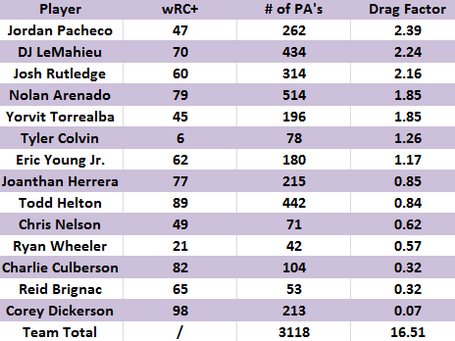 That 16.51 number is bad, back it actually got better late in the season after Troy Tulowitzki came off the DL and Corey Dickerson and Charlie Blackmon started getting regular plate appearances in August and September. At one point in the middle of the summer, the 2013 Rockies had a Drag Factor score over 20. The score went down because as the Rockies got more consistent hitters in the lineup everyday, the percentage of season total plate appearances from the worst hitters shrank.

To further explain how much bad offense there was in the Rockies lineup last season, let's take a look at the Drag Factor scores from the other teams in the division. 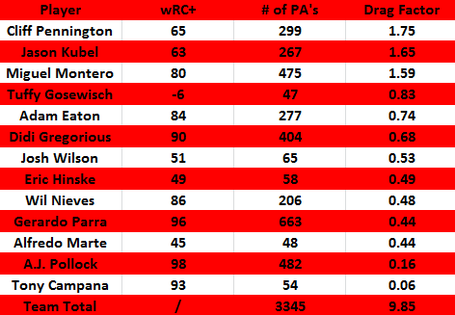 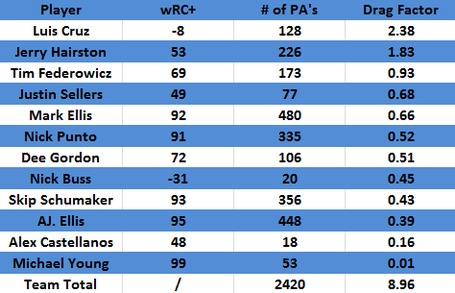 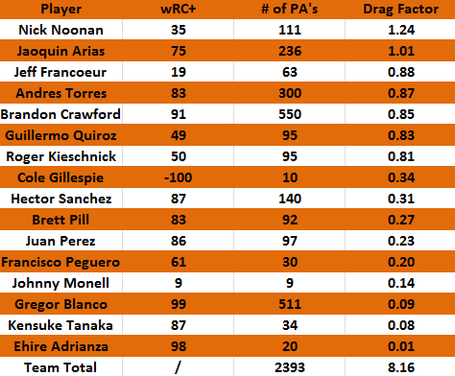 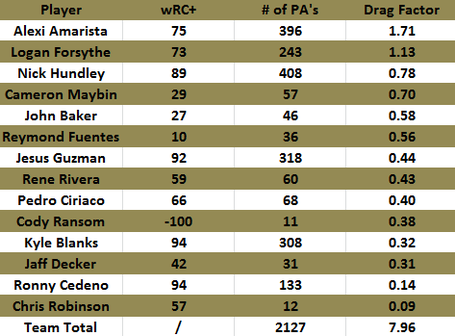 As you can see, the Rockies had BY FAR the highest Drag Factor score of any team in the division last season, and it absolutely killed them. Even though they had guys like Tulo, Cargo and Michael Cuddyer putting up outstanding numbers when they were on the field, the holes in their line up still had to bat multiple times a game every night and it limited their offensive ceiling.

We'll look at one more table before we reveal the 2014 numbers so far. Below is the Rockies final Drag Factor scores for the last ten seasons coming into 2014. Once again, you can see how poor their offensive depth was last season in relation to others. 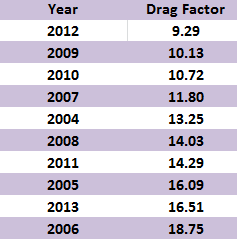 Three of their four best (lowest) Drag Factor scores came in seasons which the club had a winning record, and the 2012 score just further explains how bad the Rockies pitching was that season. The ONLY reason that team didn't lose well over 100 games is because their offensive depth actually turned out to be halfway decent.

Okay, with all of these numbers to compare, here's the current 2014 figures.

So far, so good. This can change rapidly with big injuries and to a lesser extent slumps, but a Drag Factor score around ten is much, much better than the scores in the mid teens we saw in 2011 and 2013.

Here's some quick thoughts on the 2014 numbers so far.

1) LeMahieu's score is ugly but tolerable because he plays excellent defense. It also doesn't hurt as much because it comes from second base which is a position generally devoid of offensive production. With that said, you would like to see LeMahieu's wRC+ closer to 75 or 80 instead of 64. That's a score that could make Rutledge more valuable when he gets healthy later in the season if DJ doesn't improve some.

2) You can expect Cargo's Drag Factor Score to drop to zero very soon.

3) You can expect Wilin Rosario's Drag Factor score to shrink in time and hopefully fall to zero as well (if he gets his wRC+ over 100) by mid summer.

4) A couple members of the current Drag Factor chart have still come up with huge hits even though they haven't hit often. In particular, Drew Stubbs's home run in the ninth inning against Arizona and Charlie Culberson's walk off home run on Saturday against the Mets were timed perfectly. So even though they show up on the Drag Factor chart, these two actually had a positive impact on the offence in terms of the timing of their hits.

5) Other names will be added to the Drag Factor list as the season goes on, but the key is to keep them from getting a large number of plate appearances. One piece of good news here is that the only obvious candidate on the current roster who is not currently on the Drag Factor chart and likely to join it later in the season is Brandon Barnes.

Here's the complete list of wRC+ for the Rockies right now.

If the Rockies can maintain this level of offensive depth, they will be very tough to beat when the opposing starter doesn't have their best stuff.