Corey Dickerson: Flash in the pan, or major league mainstay?

The youngest member of the Rockies crowded outfield is off to a hot start in 2014, but how viable of an option will he be in the long term?

Share All sharing options for: Corey Dickerson: Flash in the pan, or major league mainstay?

Anyone familiar with my work for Mile High Sports radio probably suspects that I have money riding on Corey Dickerson’s success in Colorado.

Before the 2012 season, I had identified the young outfielder as a name to watch for after he obliterated pitching at the lower minor league levels. By the start of 2013, Michael Cuddyer’s poor defensive numbers in right field and Todd Helton’s rapidly declining offensive numbers had me clamoring for Dickerson’s promotion from Triple-A Colorado Springs. Finally, as Dickerson’s average remained above .370 while eclipsing 300 plate appearances for the Sky Sox, I found I was no longer alone in my desire to see the kid hit at the major league level.

So far, he has not disappointed. As we sit today, Dickerson is the proud owner of a .324/.380/.620 line in 2014 and continues to be a pleasant surprise for a Rockies club that has already seen several hot starts begin to fizzle.

However, surface numbers aren’t everything and Dickerson’s big  league career is barely more than 300 plate appearances old. Additionally, although I’m a huge fan of Dickerson’s, I wouldn’t be much in the way of an analyst if I didn’t adjust my opinion of a player based on performance, so let’s take a look at the 25-year old’s major league numbers so far and see if we can’t come up with a good feel for his future.

As a jumping off point, I’d like you to take a look at what prompted me to delve into this subject. It’s the MLB leaders in ISO (Isolated Power, or slugging percentage minus average if you prefer) this season, with a minimum of 100 plate appearances, according to Fangraphs. 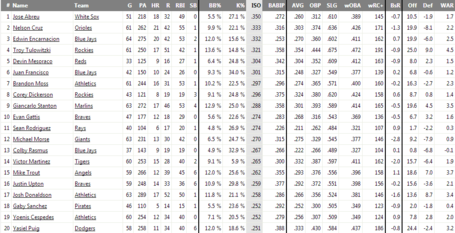 Click to, as they say on the site this was pulled from, 'embiggen'

"For crying out loud, Zach," the reader is wont to say. "Any moron can see that this is the result of a small sample size."

To that I would say that you are absolutely correct. In fact, only one player in the top-20 of the league has registered fewer plate appearances than Dickerson.

But as it has been written before by much better writers than myself, the table seen above cannot be unseen. Nor should the table be totally discounted, it just merits a closer look at the numbers.

As you may or may not know, ISO is a stat with some predictive power, but it takes a very long time for it to be useful to that end. It is said that a sample size of 550 plate appearances is recommended to draw any future conclusions from ISO. Dickerson has a mere 121 this year, and only 334 for his Major League career (in case you’re curious, his total ISO for all 334 PA is .232, still exceptional by most measures).

So clearly, we are going to need some different stats with predictive power if we are going to get anywhere on this subject. But before we get to that, there are two ‘catch all’ percentage stats that should be noted about Dickerson.

In the realm of wOBA (weighted on base average), Dickerson is even more of an anomaly than he had been when ranking ISO. His .424 wOBA ranks sixth in the majors among players with at least 100 ABs. If we use wRC+, he ranks 16th in all of baseball with 158.

These are the same metrics that were used to quantify Yasiel Puig’s contributions a season ago when he had seen a similar number of plate appearances. But once again, I’m well aware of the follies associated with such a small sample size, so let’s try something else.

How about wRAA (weighted runs above average)? Once again, it’s a stat that’s used as a ‘catch all’ for offensive production, and indeed it is very similar to wOBA, but with a few small differences. Most notably for our purposes, wRAA is a counting stat, meaning that instead of just measuring worth based on the number of plate appearances, wRAA adds up (or goes down) as stats are accumulated.

Dare I say that Dickerson is doing more with fewer at bats than any other player in the game of baseball? I won’t be that bold, but the argument could certainly be made.

But what does this mean for the kid’s long term viability in a major league outfield? While Dickerson has some power, it certainly doesn’t appear on the surface to be anything that would blow the minds of any scouts out there. Similarly, while Dickerson is a solid base runner (0.9 Ultimate Base Running), he is not -- nor will he likely ever be -- a prolific base-stealer. The bags he does swipe are usually the result of his '100-percent hustle' mentality and he still gets caught almost as often as not. His defense, while vastly improved over a year ago, will probably never be Gold Glove caliber.

Not to be overly critical, but historically speaking, guys who offer a solid batting average/on-base percentage hold intrigue for teams early on, but eventually without a secondary skill set they lose their appeal and have trouble catching on with teams during free agent years. At the very least they have trouble holding down starting jobs. Ryan Theriot and Marlon Byrd (the latter’s recent power surge aside) may be the poster boys for this phenomenon. There’s just always something coming up through the ranks that holds slightly more promise. Will that be the fate for Dickerson? A player may be able to get away with that at a position like second base. But Dickerson plays in the outfield, where there’s a premium on offense, especially for average defenders. Are there other signs here that suggest he has staying power?

I would argue that some of the signs of progress are there. While Dickerson’s strikeout rate and swinging strike rate are up slightly from a season ago, his walk rate is the highest it’s been since his days in High-A ball and his O-Swing% (the percentage of pitches he swings at that are outside of the strike zone) is down to 34.8 percent from 42 percent a season ago. One could make the case that an inflated BABIP (.375) is propping up the kid’s .324 average, but Dickerson is a contact machine who has always had high BABIP numbers, so there may not be as much regression as you’d think. Mike Trout, Andrew McCutchen, Billy Butler, Joey Votto, Miguel Cabrera, Matt Holliday, Buster Posey, Joe Mauer, and Ryan Braun all highlight a list of players with insanely high BABIPs. Lofty company to be sure, but it just goes to show it’s not out of the realm of possibility, especially for a player who’s managed to keep his elevated through his whole minor league career as well.

What could separate Dickerson from the 'decent average, pedestrian everything else' crowd is the first number we examined: ISO. While Dickerson may not ever hit 30 bombs in a season, his proclivity for turning singles into doubles and doubles into triples may be the key for staying in the starting lineup. On the other hand, what could ultimately sink him are his platoon splits. With the vast majority of his at-bats coming against right-handed pitching, Dickerson has slugged his way to a 1.055 OPS. Against lefties though, he's posted a pedestrian .606. Hard to put much stock in that yet though, as he only has 16 plate appearances against left-handed pitching this season.

With our beloved sabermetrics making their way into mainstream baseball more and more (hell, the Astros are running an entire organization on their merit), some of the numbers discussed here could end up getting Dickerson the nod even if his more traditional counting stats aren’t always there.

I’ll certainly admit my own bias here, but the signs for Dickerson are encouraging, given a path to regular playing time. While looking to the future may be an act that’s starting to wear thin for Rockies fans, at least in 2014 there is tangible progress being made by the guys at the top levels of the club’s minor league system. I’m sure that I don’t have to tell you that that has not always been the case in years past.

Dickerson represents one of the brighter futures of the group, and yet he often flies under the radar when talking about the up-and-comers on the roster. I, for one, look forward to the day that the kid is finally handed a full-time starting job, because he’s just a blast to watch at the plate.