Rockies closer LaTroy Hawkins has had a long journey back to the Rocky Mountain region (including a brief stop in Denver in 2007), where he first arrived in 1994 while in the Twins organization, but the 41-year-old veteran never strayed from his pro baseball roots along the way.

DENVER -- "Good times, man." LaTroy Hawkins paused for a few seconds, clearly attempting to conjure up memories from a distant past.

"Shoot ... I forget who my manager was my first year there."

I think it was Scott Ullger, I carefully said -- while, of course, pronouncing the 'G' in the surname incorrectly. "Ah, yeah, Scotty Ullger," Hawkins replied, subtly correcting my haphazard way of saying the seventh letter of the alphabet.

Hawkins was talking about 1994, the year his journey to the big leagues took a massive leap forward when, as a 21-year-old, the flame-throwing right-hander who was plucked by the Minnesota Twins in the seventh round of the 1991 MLB Draft was promoted to Triple-A Salt Lake.

At this point in our discussion, the Colorado Rockies' veteran closer is still off in nostalgia land regarding his time with the inaugural Salt Lake Buzz, who, now as the Bees, are celebrating their 20th anniversary this season.

"The pitching coach was Gorman Heimueller," Hawkins fondly recollects, as if trying to initiate a connection with the people of his past. "But the best time ... I think the best memory I have ... was hanging out with Joe Buzas, the owner. He was a very nice old man. He took me to Utah Jazz games. I'd go up there and sit with him; go in his office and chit-chat with him, talk about everything."

Buzas, who owned the Portland Beavers prior to their move to Utah, brought a fairly high level of baseball back to the Wasatch Front a decade after the last incarnation of a Salt Lake Pacific Coast League team, the Salt Lake Gulls, were sold and moved to Calgary. And for me, a 10-year-old kid who loved everything about the sport, the Buzz might as well have been a big league squad. Hawkins' presence on the Buzz played a significant part in that star-struck feeling I had.

Armed with a fastball that could reach the upper 90s and confident demeanor, the native son of Gary, Ind., was the 30th-ranked prospect in the game, according to Baseball America. The promise bore itself in the results. In 1994, Hawkins posted a 4.08 ERA in one of the worst environments for a pitcher in the PCL. He followed with a 3.55 ERA as a 22-year-old the next season by using an approach Rockies fans are all too familiar with: pitching to contact. Hawkins struck out fewer than 4.5 batters per nine innings in that two-year stretch but found a way to get batters out in an era during which the best minor league talent rarely skipped Triple-A unlike what often happens today. 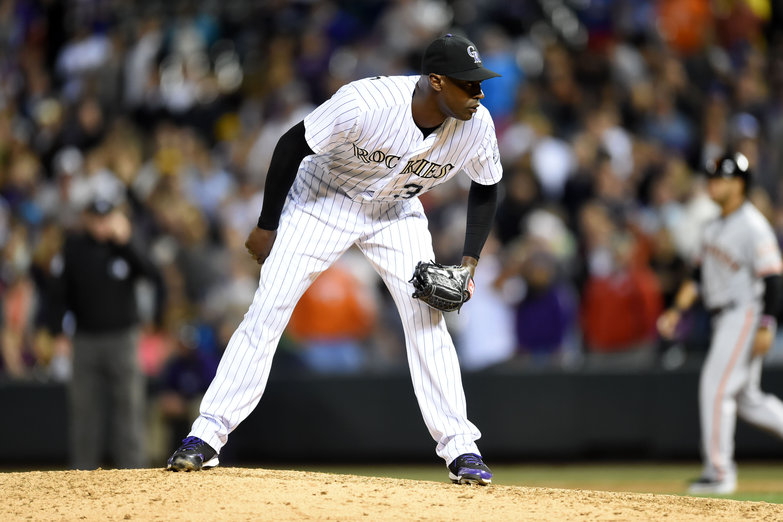 After an extremely rocky start to his long MLB career, Colorado's closer has gotten -- and continues to get -- better and better with age.

The approach didn't benefit Hawkins early in his major league career, but it has done wonders for him since he was converted into a reliever more than 14 years ago. Now, nearly two decades after making his major league debut, Hawkins is still relying on the method that took him to the highest level. He's not naive about its side effects, either.

"I might not walk a lot of guys, but I give up a lot of hits because I am always around the strike zone," Hawkins told me in May when asked about how he attacks hitters compared to some of his teammates, who are largely responsible for the Rockies' below-average walk rate. "That's a tricky stat from the propeller heads," Hawkins quipped. "Some of the other guys might give up more walks than me, but they don't give up as many hits."

He's right, but to this point, the hits haven't affected his performance. It took me exactly a month after I interviewed Hawkins to write this article, and because of his and the team's struggles around that time, I stressed on multiple occasions about how some of the quotes in response to the questions I asked--You're having a great season to this point; what has been the key to your performance?--might end up obsolete by the time I got around to writing it.

But they haven't. And that's a testament to the mentality that Hawkins has as a closer. He knows what works for him and what doesn't, and he doesn't change that regardless of where he's pitching or who he's facing. That's why, since blowing a save later that day against the Padres, Hawkins has allowed only one earned run in 9⅔ innings of work.

Even staying down in the zone can hurt pitchers at Coors Field, but the fear of relinquishing contact or having traffic on the base paths doesn't intimidate Hawkins. He trusts his teammates to make plays to pick him up in the field, and as he found out on that warm May afternoon in LoDo, at the plate.

"We have Gold Glovers in the infield and a pretty damn good outfield," Hawkins said about his fellow purple pinstripers. "And they can hit, too."

Justin Morneau proved that a few hours later when he launched a walk-off home run in the bottom of the 10th inning off of Padres reliever Dale Thayer to make everyone forget about the game-tying homer Hawkins served up to Everth Cabrera an inning earlier. That's what good teammates do, and that fact isn't lost on Hawkins.

"We're in a good place," Hawkins said after the game. "We have guys that can fight through these close division games, and that's important because it's always going to be this way in the NL West. Always has been."

The Rockies have been better in those types of contests this season, as evidenced by their three-game sweep in San Francisco last weekend. Hawkins played a big part in the outcome of those games, earning three saves while allowing only one baserunner in three innings of work. He now has 14 saves and a 2.88 ERA for the Rockies, who are fighting to stay alive in a top-heavy division.

That's not bad for a guy whose first exposure to major league-caliber hitters came exactly two decades ago in the debut season for a minor league franchise that has now been around long enough to undergo two nickname and logo overhauls, three changes to the name of its ballpark, and an ownership switch.

It all comes back to the club that drafted Hawkins. The Twins' pitching philosophy, which has been borrowed and modified by a Rockies organization still trying to find its identity after 21 years of existence, helped carve out a very successful career for the 20-year major leaguer.

"Pitching to contact is the way I was taught in the Minnesota Twins organization and I think I've carried that through my whole career," Hawkins gleamed.

It's a career that, judging by Hawkins' ability to still run his fastball up into the mid 90s and frustrate even the best hitters in the league, won't end on anyone else's terms but his own.