Can Christian Bergman turn it around this season?

He's not the most talented prospect, but Christian Bergman will stay in the Rockies' rotation for the foreseeable future. What can he do to make that stay more effective?

Share All sharing options for: Can Christian Bergman turn it around this season?

For whatever reason, I just cannot bring myself to get excited about Tyler Matzek.

Maybe it’s the former first round pick’s seemingly glacial pace as he worked his way up through the minor league ranks, or perhaps the career walk rate approaching six per nine innings. Whatever it is, Matzek is just not a pitcher that I currently consider interesting enough to delve further into his stats. For now, I’m content to say that he needs to do a better job of throwing strikes and keeping the ball down.

Someone will probably want some sort of proof of this hypothesis so here’s your first graph of the day, compliments of a fun Baseball Savant pitch/fx tool (as you’ll soon see, I may be enjoying this tool too much): 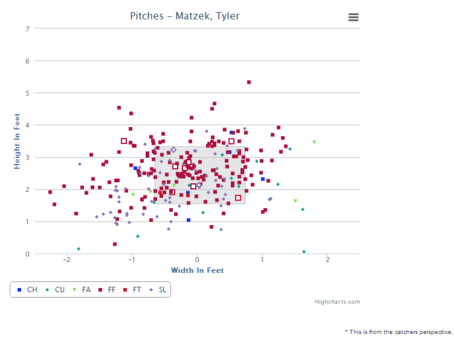 Rather wild, is the way I would describe that.

Furthermore, Matzek’s first pitch strike rate is sitting well below the league average, as is his swinging strike rate, and he’s throwing almost 40-percent of his offspeed pitches for balls. That’s including his first start in which he threw 60 of 81 pitches for strikes. So yeah, same old Matzek.

On the other hand, prior to his latest start in the big leagues, I found myself kind of intrigued by Christian Bergman. It’s not that the kid had overwhelming stuff by any means, but a career strikeout to walk ratio of 4.03 ( a favorite stat of mine as I have some belief in its predictive power) and surprisingly suppressed home run numbers (even in Colorado Springs) are exactly the type of traits that Colorado values in their young pitchers these days. Throw in his streak of scoreless innings for the Sky Sox (where pitchers usually get shelled on the regular) and a repertoire that includes an apparent comfort in throwing both a slider and a changeup, and there was just enough there to give the illusion that perhaps Bergman could make hay as a competent starter in Colorado.

Unfortunately, things haven’t gone that well for Bergman so far. While he’s maintained his excellent K/BB numbers and really given his team a chance to win in two of three starts, he’s surrendered a concerning number of home runs and his batted ball profile is deeply concerning. Now he may miss a start with a swollen hand to boot.

Nonetheless, let’s take a look at what might be ailing the young man on the hill.

As some of you may have already surmised over recent weeks, I’m a sucker for pitch types when it comes to Rockies starters. It’s probably a fairly elementary point, but historically nothing has correlated more to success at Coors Field (both Rockies starters and opponents) than mixing speeds. Furthermore, as mentioned earlier, it’s widely regarded that starting pitchers need a minimum of three pitches to thrive in the big leagues. A fastball and a slider are the two basics, and a changeup is usually desirable to help neutralize platoon splits. There are exceptions to this of course, but they are few and far between, so this works for a general principle.

Our subject throws all three, as well as an occasional curveball, but Bergman’s problems this season have been the opposite of platoon splits. Right-handed hitters are mashing him to the tune of a 1.219 OPS in 8.1 innings, versus lefties hitting .606 OPS in 6.2 innings.

With that in mind, let’s take a closer look at all 151 pitches thrown to right-handed bats so far. 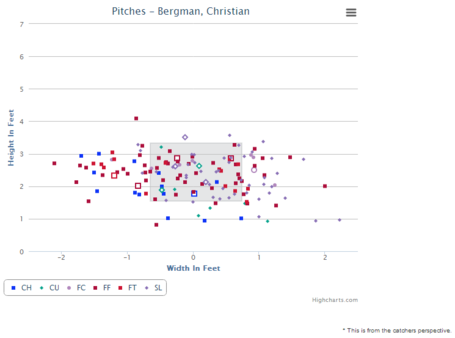 Quite a bit there. Let’s narrow it down to pitches that have resulted in a hit from the right side. 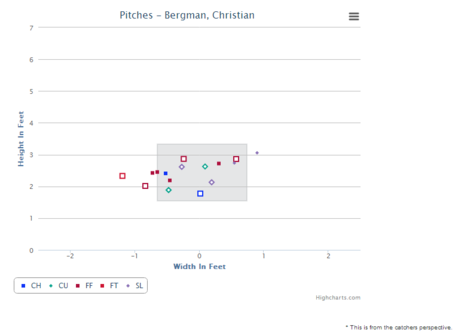 Worth noting here that most of what’s being hit is considered a fastball of some kind, but, even though Bergman has thrown only nine total curveballs to right-handers, two have gone for extra base hits. Delving further into it, Bergman has surrendered three hits on just 15 curveballs thrown and hasn’t induced a swinging strike on a single one of them. Perhaps he should consider shelving the pitch until he has a chance to develop it more.

But moving on, let’s try to narrow it down one more time. How many of those hits came with two strikes? After all, I’d expect Bergman to really be pounding the strike zone early in the count so it would make sense for most of the hits to come early as well. 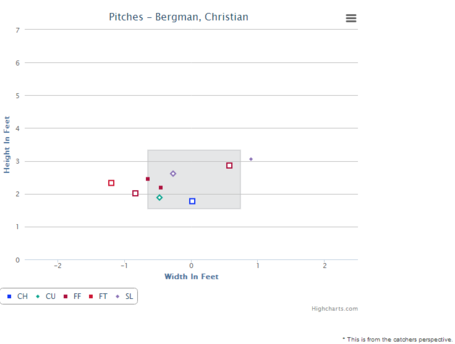 Now that’s pretty telling. What the reader cannot see, because this is a screen shot and not the actual graph created, is that all of the hollow symbols (only on this particular graph, by the way) are extra base hits (in this case, three home runs and three doubles). Bergman seems to prefer to work right-handers inside, but as the batters accumulate strikes and tighten things up, they sit on those inside pitches and punish the young pitcher’s offerings. By comparison, only one of the six hits that lefties have hit off of Bergman has been with two strikes, and he’s done a much better job of painting corners against lefties. 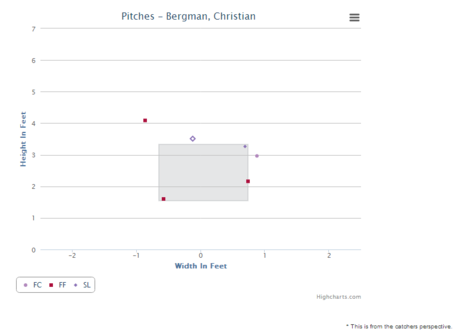 Predictably, these pitches aren’t getting much of the plate, if any. Bergman doesn’t have a single offering that’s going to overwhelm anyone, so for him to be effective, he needs to hit location. That location really needs to not be middle-half in.

By no means is this an exhaustive scouting report of Bergman, but one can definitely see some patterns in his pitch selection and location. In theory, that should be the first measure taken by the Rockies to help Bergman to be more effective, hopefully rather than trying to reinvent a young pitcher’s throwing motion when all he may need is a little guidance on locating pitches better in key counts.

Interestingly, I started this search expecting to find that Bergman’s slider is just not fooling anyone, or that its velocity simply doesn’t vary enough from that of his fastball. In the end, there just wasn’t much to support that claim. In fact, the only pitch that really stood out as obscenely poor was the seldom-used curveball, which pitch value numbers back up (-11.27, yikes). Pitch values also show Bergman’s fastball to be underwhelming, but we kind of knew that already. The bottom line there is that he needs to locate it better and avoid the getting too much of the strike zone when ahead in the count.

Kind of ironic that with disdain for Matzek’s proclivity for walking batters, my advice to his teammate Bergman is to actually move more pitches away from the strike zone.

Other suggestions for Bergman? I’d love to see them, as this is only one way of many to approach such a project.