Here's some more stuff that you need to know as we get closer to the draft. File it away!

We are two days away from the first round of the 2014 MLB First-Year Player Draft, and with that, comes some late buzz from ESPN's Keith Law that the Rockies could take Indiana catcher Kyle Schwarber with the No. 8 overall pick:

"This is the first change from my last mock, based on some new intel on Monday; it wouldn't shock me given scouting director Bill Schmidt's history of taking power-hitting catchers who need a lot of work at the position, which didn't work with Pete O'Brien (who didn't sign in 2011) but looks good so far with Tom Murphy (third-round pick in 2012)."

Schwarber isn't considered a first-round player by some folks because of the concern that Law notes about his ability to stay at catcher. Schwarber's hit tool and power potential would serve him very well behind the dish, but they might not play well enough if he has to move to first base.

Evansville right-hander Kyle Freeland is the consensus No. 8 overall pick according to various recent mock drafts (via SB Nation MLB), and the Thomas Jefferson High School alum would obviously be a good fit for the Rockies. In Law's recent mock, Freeland is slated to fall to the Brewers at No. 12.

Whatever the Rockies decide to do with their first overall pick, it will almost certainly affect what they do in the later rounds because of MLB's draft slot system. Here's what the Rockies will have to spend this year, courtesy of our very own RhodeIslandRoxFan: 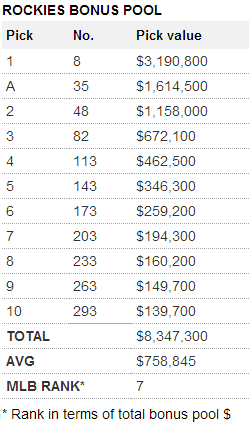 The Rockies have historically been aggressive with drafting high school talent in later rounds and making large bonus offers to lure them out of their college commitments. Going with a player like Schwarber in the first round would likely better enable them to use a similar strategy in 2014.

Tomorrow, we'll reveal the results from our poll on Saturday asking you -- the readers -- who the Rockies should select in the first round.