Share All sharing options for: What's with Jhoulys Chacin's awful start to 2014?

There's no way around it: Jhoulys Chacin has not been good in 2014. The 26-year-old right-hander entered the season with a ton of promise after posting a 3.47 ERA in just under 200 innings for the Rockies last year. Arm discomfort at the outset of spring training temporarily derailed the optimism, but Chacin missed only a month and was back in the Rockies' rotation on May 4.

But, then, this happened: 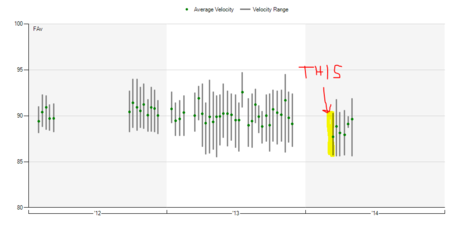 That's Jhoulys Chacin's velocity chart, and the one I pointed out with my advanced MS Snipping Tool skills is his average and range of velocity from that May 4 start. Chacin's velocity had never been lower at any point in the last three years than it was when he allowed four runs on eight hits and five walks in five innings. Worse, Chacin induced ground balls against just 23.5 percent of the batters he faced that day after posting a 46.8 percent ground ball rate last season.

Chacin's ground ball percentage has stayed low all season; through six starts, it's nearly back to 2012 levels at 39.6 percent. Worse yet, his home run rate has normalized (though that shouldn't be completely unexpected) and he's allowing a higher percentage of hard-hit balls than he ever has.

Some of that is velocity related; Chacin's average fastball is about 1.5 mph slower than it was a year ago, and his two-seamer has lost about 2 mph of giddy-up. But the larger problem lies in his command. Chris Chrisman noted the other day on his fantastic blog, Checkswing Roller, that Chacin is opening his hips up too much and too early, and although it isn't necessarily affecting his release point, it is having an effect on the movement of his pitches.

Using the same game (Aug. 28, 2013 against the Giants) Chris referenced from last year, I compared Chacin's pitch plot from that start to his last outing against the Indians:

Chacin was in or around the zone quite a bit in his seven-inning, one-hit outing against the Giants, but he rarely missed up and as a correlation, pounded the ball at knee-level and below. But on Sunday in Cleveland, Chacin was wild, and not necessarily in an effective manner; he missed upstairs frequently, and when he did find the zone, he found way too much of it. There's high much higher concentration of center-cut pitches, for sure.

This is a big reason why Chacin switched to the stretch on Sunday; he's all out of sorts on his delivery from the wind up, so slowing things down a bit helped him to rein in what had been some very erratic offerings. After a rough first inning in which he allowed three runs largely due to three walks, Chacin settled down and gave up only a run on two hits and a walk the rest of the way.

Chacin won't be able to pitch from the stretch all the time, so he's going to have to work to slow down his delivery and find a timing mechanism -- such as Chris' suggestion of a more deliberate leg kick -- to combat his problem of opening up too early. That seems to have worked for Rex Brothers, who has shown much better command as of late even though his velocity is still missing. Chacin isn't having that same problem, as Fangraphs' chart shows his velocity issue is already starting to correct itself, so getting the command down should go a long way toward helping the young Venezuelan reclaim his success from a year ago.