The 2014 Rockies have the best offense in franchise history, which should tell you a little something about the pitching staff

Only half of this team needs fixing. Let me show you why.

Share All sharing options for: The 2014 Rockies have the best offense in franchise history, which should tell you a little something about the pitching staff

Okay, so the Rockies are awful. Not exactly groundbreaking news. However, as we move forward and discuss what the team needs to do in the coming months, it's important to compartmentalize their struggles and properly understand what's sinking this season.

Usually when teams are as bad as the Rockies, they're failing across the board. That's not the case with this club. Instead, the pitching has been so unbelievably horrendous, that it's been able to drop the Rockies to the bottom of the National League despite THE BEST OFFENSE IN FRANCHISE HISTORY. That's right; according to the stats which adjust for the park and the league, this year's offense is the best Colorado has ever put together (so far anyway). Let's take a closer looker at the bats.

Last year, I introduced a metric called "Drag Factor" which is designed to measure how much "bad" there is in a team's lineup choking overall production. It's a key stat because it underscores how bad players receiving significant playing time are just as detrimental to a team as star players are helpful.

Since each individual player's Drag Factor score is measured against a percentage of the team's total non pitcher plate appearances, it allows us to compare in season team Drag Factor scores to final Drag Factor scores of previous seasons. Before we dive into that though, here's a brief explanation of the metric. (Skip ahead to the colored tables if you don't care about the math)

(If you are not familiar with wRC+, here's a link that explains the metric.)

In a nutshell, we're looking for players who have a very low wRC+ and a very high number of plate appearances. The more extreme the combination of each of these two factors become, the higher a player's (and team's) Drag Factor score is going to go.

Let's start off by getting a reference point with a look at the season ending Drag Factor scores for the Rockies over the last ten years. 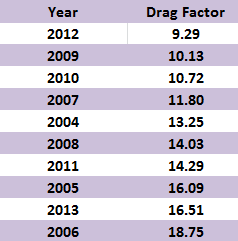 With one very big exception, Colorado's success over the last ten seasons is strongly connected to low Drag Factor scores. 2012, which is only the eighth best offensive season in Rockies history according to wRC+, had the opposite problem offensively, which was the lack of any real good hitters (nobody on the team had a wRC+ higher than 121 thanks to Troy Tulowitzki's groin injury), and it of course also had historically awful pitching. A low Drag Factor score in 2012 is the only reason that team didn't lose over 100 games.

Unfortunately, history seems to be repeating itself. Only this time, it's more extreme. Here's a detailed look at the 2014 Rockies' Drag Factor scores so far.

As you can see, the Rockies have actually done an excellent job of keeping bad hitters from piling up a bunch of plate appearances - A feat that's made more impressive with the absence of Carlos Gonzalez (whose injury helped him appear on this list), Nolan Arenado, and Michael Cuddyer.

The Rockies are still not without issues here:

1) They're eating LeMahieu's Drag Factor score because they love his defense.

2) the Arenado injury gave Charlie Culberson significantly more plate appearances then the team would have liked.

3) Wilin Rosario's had a disappointing season.

Overall though, 10.08 is a very reasonable and contained Drag Factor score. If the Rockies had this with last year's pitching staff, and they did before Troy Tulowitzki, Carlos Gonzalez, and Dexter Fowler all got injured during the same game in June, you're likely looking at a team that finishes around, and maybe even over .500.

For comparison, let's look at how the rest of the division is doing here. 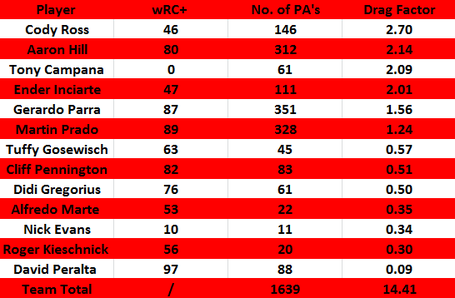 There's not much to say about our desert dwellers to the southwest. The Drag Factor score is bad but not quite horrible. Short of Paul Goldschmidt, this is just an underwhelming team which lots of little problems coming together. 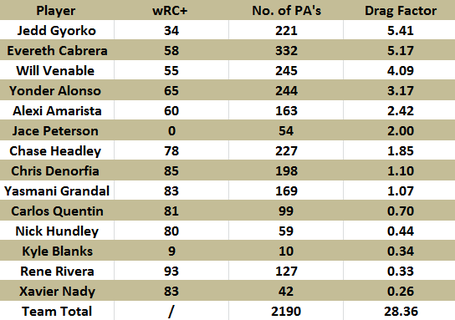 This is, by far, the worst Drag Factor score I've ever seen since I started tabulating this information. This is the offensive version of the Rockies' pitching staff. Both the number of guys who appear on this list and the overall impact of the guys at the top of this list are out of control. The only reason the Padres are not on pace to lose over 100 games is their exceptional bullpen, which is a major reason why this team is 30-1 when leading after six innings.

This is a Drag Factor score that's been rising rapidly over the last few weeks. When the Giants were at their high water mark of the season at 42-21, their Drag Factor was down around 8.5. Recently though, the devil has come to collect. Brandon Hicks and Tyler Colvin have turned back into pumpkins, a few injuries have forced more inexperienced players into the lineup, and this team's general lack of offensive depth is being exposed. The Giants are not as bad offensively as they've been of late, but they're nowhere near as good as that 42-21 start suggested. Don't expect to see this number get back below ten.

This might be the single biggest advantage associated with all the money the new ownership group brought in. Without years of old expensive contracts choking production like the Yankees have, the Dodgers' money has helped cut off most of the opportunities for high Drag Factor scores to creep into the picture. The other two major things that have helped  here are the emergence of Dee Gordon (the Dodgers nearly had a big problem at second base even with their payroll) and Juan Uribe playing the best baseball of his career over the last 15 months.

Circling back to the Rockies, the combination of a low Drag Factor score (something they had in 2012), and huge seasons from Troy Tulowitzki and Corey Dickerson (something they didn't come close to having in 2012) have resulted in an offense that's being overlooked. I've seen some lazy analysis around the internet recently claiming that the Rockies don't have very good depth offensively at the every day positions, but other than third base, it's just not true. Even with some big injuries, the Rockies as a team are among the best in the league in all the meaningful PARK ADJUSTED stats.

So how are the Rockies so terrible if their offense is good? The pitching of course.

If we look at ERA- (which is basically the wRC+ [in terms of creating a scale where 100 is neutral] pitching, park adjusted version of ERA where lower scores are better), we see something stunning about the 2014 Rockies. Here's the five worst ERA- scores for the Rockies as a team since the they moved into Coors Field in 1995.

(1993 came in at 118, but I decided to omit it and just look at Coors Field history [1995 onward] since that team gets a pass for being an expansion club)

The 2014 Rockies pitching staff has been such an abomination, that even if they manage to be league average (ERA- of 100) for the rest of the season, they will still post the third worst ERA- score in franchise history since moving to Coors Field. That's "train carrying nuclear waste derailing in a fiery crash amid a populated area" bad.  If it wasn't for the job the offense has done this season, this team would probably be on pace to lose over 105 games (instead of the 95 they are on pace to lose right now).

If you're curious as to how the 122 ERA- score ranks in terms of the worst pitching staffs in the NL over the last 20 years, here you go ...

The Padres do provide some good news here though. The 1997 team followed this up by going to the World Series in 1998 and the 2003 team went to the playoffs in two of the following three seasons. So it does show you that a sharp turn around is possible if the Rockies play their cards right, especially with the offense they already have in place.

So as we head towards the trade deadline and eventually the off season, be careful to remember that this team is only half broken. The half that is broken is broken at a near historical level, but the whole thing doesn't need to be blown up. A core of Troy Tulowitzki, Carlos Gonzalez, Corey Dickerson, and Nolan Arenado (all under control through at least the end of 2017) is still a heck of a first step towards contention. The virus is contained to the pitching staff.