Small sample sizes are seemingly all we have to work with when it comes to Rockies pitchers, but there's still plenty to learn about Tyler Matzek through six starts.

Share All sharing options for: Rockies LHP Tyler Matzek has been good but still needs a lot of work

Lately it seems like all sample sizes are small ones when it comes to the Rockies.

As you can imagine, this type of revolving door of first-time big leaguers can wreak havoc on the best-laid plans of writers (present author especially) who enjoy the challenge of learning new sabermetrics and then writing about them in such a way as to generate maximum inter-web clicks, or whatever the kids are calling it these days.

Small sample sizes increase the odds of being wrong. I do not find ‘being wrong’ to be enjoyable. Having my wrong-ness in writing on the public record that is the internet; I find that to be even less enjoyable.

It is with that in mind that we bear witness to the strange case of Tyler Matzek, a man that not so long ago on these very pages I denounced as an profoundly boring prospect until he can get his walks under control. But as we stand here today, Matzek (despite last night’s troubles) has a peculiar distinction among the 13 pitchers who have started a game for Colorado this season:

Click this chart, or any other chart or graph to big-it-up

That friends, is ‘Tyler Matzek: FIP leader for your Colorado Rockies.’

While Matzek’s 35⅔ innings in the big leagues hardly add up to a number that you’d like to draw definitive conclusions from, the table above cannot be unseen. As such, let’s see what else we can learn about Matzek so far.

While Colorado’s big lefty has shown promise at times through six starts, it’s important that we keep track of the reason it took him over four years to reach the big leagues. That reason is unequivocally the number of bases on balls that Matzek surrenders. Just look at his game log:

It doesn’t take a rocket scientist to see the correlation here; if Matzek keeps his walks under control, he has a pretty good chance at being successful on any given night.

While contemporary media is content to dismiss such a phenomenon as a lack of control, I remain unconvinced. Despite poor walk rates in two of his first six starts (and mediocre in one other), Matzek doesn’t appear to be particularly wild on the mound. That is to say, I don’t believe we have a "Mr. Snappy has a mind of his own" scenario going on here.

More likely, this is a classic case of a guy trying to paint corners and begging batters to chase bad breaking pitches. While a common trait among young pitchers (and even some older ones), it’s a particularly damning quality in a Rockies organization that doesn’t value strikeouts and puts a premium on keeping the base paths as clean as possible, so if disaster strikes, at least the damage will be minimal.

Perhaps pitching coach Jim Wright has been in the kid’s ear about this, because despite his troubles at times his 2.78 BB/9 would still rank as far and away the best mark of Matzek’s career at any level.

But there is something else at play here:

Over 90-percent of Matzek’s pitches can be classified as either a fastball or a slider. Historically, pitchers that live and die on a two-pitch arsenal have had pretty nasty platoon splits. Here’s a chart that I found conveniently pre-made for this exact purpose about a month ago, brought to you by the folks at fangraphs.com: 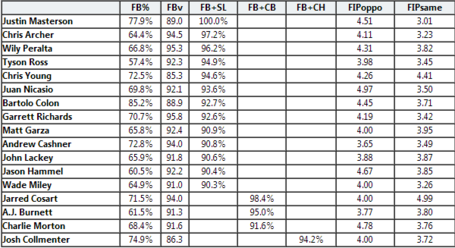 Unsurprisingly, Matzek is also sporting a 1.07 FIPsame versus a 4.17 FIPoppo. It’s also worth noting that if he were in the big leagues at the time this graph was created, Matzek would only be the second left-handed pitcher on the list. It’s far easier to get away with extreme platoon splits as a right-handed pitcher because of the relative scarcity of left-handed bats. Of course, this is all relative. I’d defy anyone to find a name on that list that hasn’t battled severe inconsistency over the course of their career.

The same column that gave us that chart suggests that right-handed pitchers in this category should work on changing sight lines (left-handed hitters apparently don’t like fastballs high in the zone as much as right-handed bats), but what is a lefty in the same situation to do?

First, here are the pitches that Matzek has thrown to right-handers that resulted in hits: 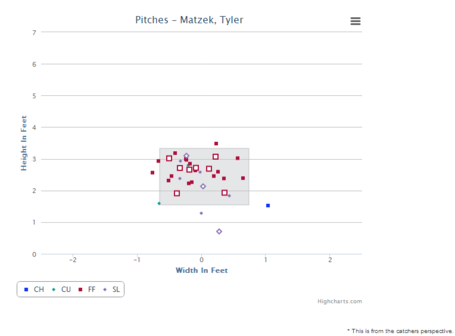 A lot of fat fastballs and hanging sliders. Now, let’s take a look at the pitches to righties that have resulted in outs, foul balls and swinging strikes: 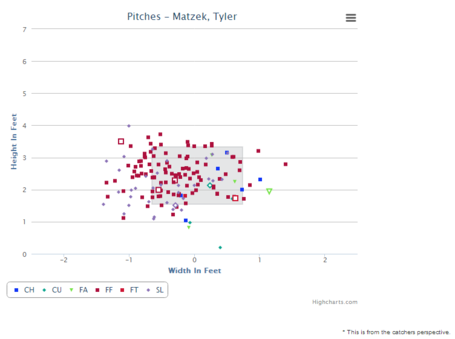 Interesting. What’s worked for Matzek so far has been working middle-half in against righties. I’ll spare you more of these pitch trackers, but if we reduce it down to swinging strikes and foul balls only, the pattern becomes far more profound. In particular, pitching low and in to right-handed bats seems to pay the highest dividends for the 23-year-old.

But at the end of the day, Matzek would be far better served by developing his changeup and curveball to the point that they can help him neutralize those splits. Working down and in against righties and pushing them towards chasing those sliders is not going to help walk rates, especially to a right-handed bat that presumably is going to be able to see the ball better out of his hand.

Tyler Matzek’s arrival in the big leagues has been a long wait, but if he’s to be a solid major league pitcher for years to come, fans will have to wait a little longer. On the plus side, he’s been great against lefties. So there's that...