Game No. 119 Preview: Flande vs. Despaigne

Yohan Flande has appeared in seven games for the Rockies so far this season, and they've lost every single one of them.

Share All sharing options for: Game No. 119 Preview: Flande vs. Despaigne

The Rockies have lost four out of their last five, nine of their last eleven, and 37 of their last 49 games. However, they do not stand alone as baseball's worst team over this stretch. That's because the Texas Rangers have equaled Colorado's 12-37 record over their last 49 games and as a result have kept pace with the Rockies in the upside down race for the top selection in the 2015 draft - A selection that's only become more important since the Houston Astros are guaranteed to have the No. 2 overall pick next year after they failed to sign No. 1 overall pick this year Brady Aiken.

Coming into tonight, here's what the Reverse Standings look like...(The Rockies have the tie breaker for the No. 1 overall pick with Texas as they had a worse record in 2013)... 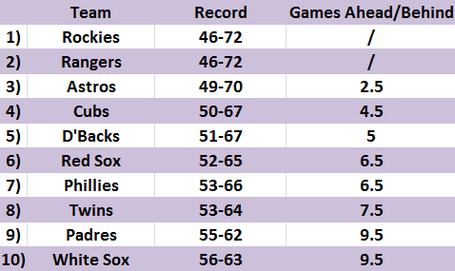 On the mound tonight for the purple team is a man who's made significant contributions to Colorado's perch atop the  Reverse Standings. Yohan Flande brings his bloated 5.77 ERA and his unimpressive 4.8 K/9 rate into tonight's action as he tries to break the team's dubious streak of losing every game he's appeared in.

Facing off against Flande is Odrisamer Despaigne. This is the first time the Rockies have ever faced the man who broke spell check and it's hard to gauge how their bats will fare. Over his first six starts in the majors, Despaigne posted just a 1.66 ERA, but he's stumbled significantly over his last two outings, allowing six runs in 5.2 innings against the Cardinals, and another four runs in 5.2 innings in his last start against the Twins.

The Rockies lineup will feature a mix of extremely hot and extremely cold bats. On the hot side, you have Corey Dickerson (who's homered in each of his last two games), as well as Nolan Arenado, Justin Morneau and Brandon Barnes; all three of whom have an OPS over .900 over the last two week. On the Cold side, you have Charlie Blackmon, Josh Rutledge, and DJ LeMahieu who have a .379, .361, and .179 OPS over the last two weeks respectively.